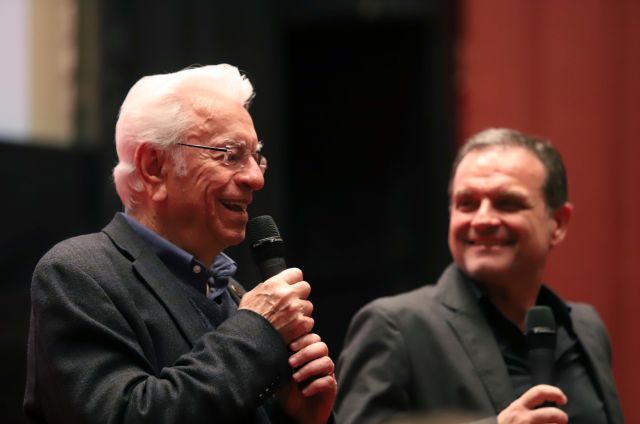 A special evening introducing the audience to a journey through space took place on Saturday 3 March 2018 at a packed Olympion Theatre, as part of the 20th anniversary edition of the Thessaloniki Documentary Festival.

The screening of Emer Reynolds’ documentary The Farthest, about the captivating tales of the people and events behind the historic Voyager spacecraft mission, was followed by a conversation with the acclaimed space scientist, a NASA collaborator and an Academy of Athens member Dr. Stamatis Krimigis. Greek journalist Makis Provatas moderated the conversation.

Before screening, the TIFF Director Orestis Andreadakis introduced the distinguished guest speaking about this documentary’s subject. “At the end of August and the beginning of September 1977, the spacecrafts Voyager 1 and 2 launched their journey, carrying two golden records containing information on the achievements of human civilization. Many people worked hard for this incredible mission to succeed. Among them, there was a Greek. I would like to welcome Dr. Stamatis Krimigis, supervisor of Space Physics and Instrumentation in the Applied Physics Laboratory of Johns Hopkins University, and an Academy of Athens member”, he said.

Dr. Krimigis spoke right after, saying how he was amazed to find out that this particular film had been included in this year’s TDF, and thanking the festival for inviting him. Consequently, he commented on the film title, noting that the concept of “farthest” is quite vague and unclear for a non-savvy viewer. “Just think that the spacecraft Voyager 1 is today at a distance of 21.176 bln km from Earth. Based on the astronomical unit (the unit of length within the solar system), which is roughly defined as 150,000 km, we estimate that Voyager 1 is at a distance of 141.5 AU from our planet, a distance which is unconceivable for the human mind. Voyager 1 sends signals to Earth on a daily basis, which we receive in about 19 hours 37 minutes after transmission. Imagine that sunlight reaches the Earth in about 8.5 minutes”, he explained. 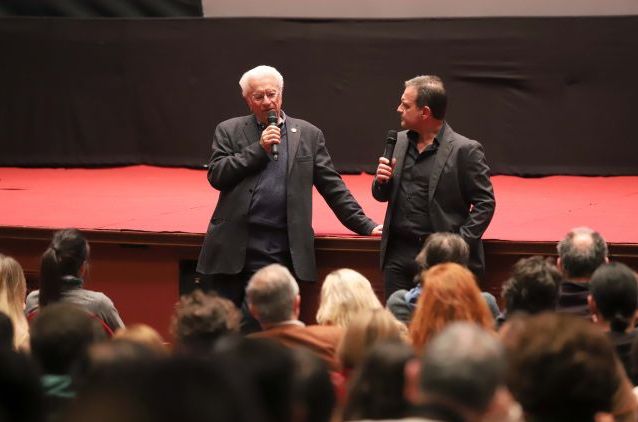 Consequently, Dr. Krimigis compared Voyager 1 to a bottle traveling along the ocean, carrying a message sent by humanity to the infinite universe; this bottle will survive and go on traveling after the end of human civilization. Concluding, he mentioned the ancient Greek phrase “Hoitines pot'este chairete! Eirēnikōs pros philous elēlythamen philoi” (Greetings to you, whoever you are! We come in friendship to those who are friends), contained in the Voyager 1 and 2’s golden records.

After screening, a conversation with the audience took place. In his opening comments, the moderator Makis Provatas asked Dr. Krimigis whether the scientific team behind Voyager 1 and 2 missions had had to invent technological “gimmicks” that were ahead of their time and were future-oriented. “There were innovative devices long before Voyager, since the very first steps of the space program. Just think that there actually was a digital camera in the first mission to Mars, in 1965. The biggest difficulty we faced in the case of Voyager was that, until then, spacecrafts were only staying in space for a period of 8-10 months. The two Voyagers are about to stay there for 40 years. It goes without saying that at the time it was impossible for us to know how to construct a spacecraft able to stay in space for 40 years”, said Dr. Krimigis.

Consequently, he compared to space program scientists to explorers struggling in order to boost technology a step further. “We are guided by the breakthrough point reached by our ancestors when they understood that religion must be separated from science once and for all, and certain phenomena must be interpreted through logic and not by means of deus ex machina. Thenceforward, each time the human mind manages to gain an understanding of how nature works, a new potential emerges, contributing to the progress of civilization”, he added. 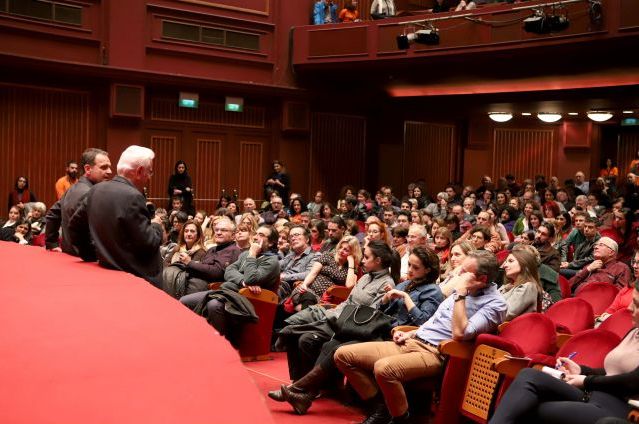 Consequently, Dr. Krimigis expressed the opinion that funds invested in science and research can never go to waste, since a society not investing in these areas ends up mortgaging its future, not able to move a step further ahead. “The frequencies we used to receive the two Voyager signals are the the same which are being used today in mobile telephony. Respectively, the software that allowed us codify these signals today consists the basis for all telecommunications structure. It is estimated that funds spent on space research yield 8/1”, he added.

In the last part of the conversation, Dr. Krimigis replied to the audience’s questions, stating his opinion as to whether there is a chance for us to be surprised by Voyager 1’s findings; since 2012, the spacecraft is traveling out of our solar system. He noted that he considers this rather impossible, since though Voyager 1 is now in uncharted celestial territory, information gathered is quite specific. “Voyager 1 is now traveling in a complete void, and we are able to determine its location with one meter deviation, even though it is located 21.156 bln km from Earth. If there was any chance to meet a new celestial body, we would have known that through measurements that take place on Earth, thanks to telescopes with more than 30 m in diameter. We will continue gathering information and data, but I don’t expect impressive surprises”, he explained.

Finally, asked about Elon Reeve Musk, the magnate, inventor and founder of SpaceX company, and his activities, Dr. Krimigis said he considers him a successful businessman, talented in marketing, but noted that Musk’s theories on Mars colonization within our century don’t have the slightest scientific credibility, since such a possibility is and will be unfeasible, at least based on what we know today.

Dr. Krimizis’ latest book Travel through Our Solar System is available from Papadopoulos Publications. The documentary The Farthest will be screened in Greek theatres on April 26 2018 by distribution company Filmtrade.