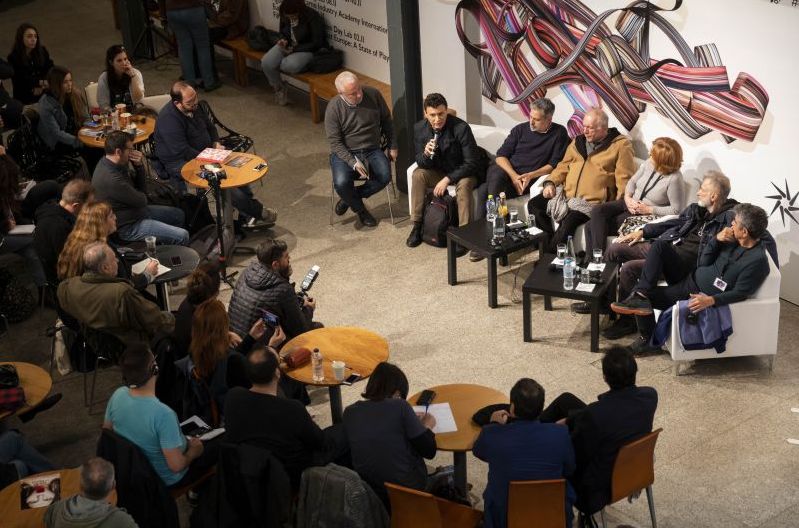 The 59th Thessaloniki International Film Festival’s big tribute to the Greek queer cinema was the occasion for an interesting discussion entitled “The Greek Queer Cinema: An Oral Story”, which took place on Thursday, November 8, 2018, at Warehouse C’ (Port).

The directors that took part in the discussion, and whose films are presented as a tribute, were Iris Zachmanidi, Takis Spetsiotis, Konstantinos Giannaris, Panos H. Koutras, Angelos Frantzis, Panagiotis Evangelidis, Haris Papadopoulos and Kyriakos Hatzimichailidis.

TIFF artistic director Orestis Andreadakis opened the discussion saying that it is the first time that an official public body decides to deal with the Greek queer cinema, presenting 38 feature and short films in total. The tribute is curated by Konstantinos Kyriakos, Associate Professor of Theatre and Film Studies (Department of Theatre Studies, University of Patras, Greece), whom Mr Andreadakis  warmly thanked, as he did for all those who contributed to this tribute. “Unfortunately, some film directors in this tribute are not here anymore, but they will always be present in our hearts and minds”, added Mr Andreadakis, also explaining that films by Alexis Bistikas were not included in the tribute due to intellectual property issues.

The next to speak was the curator of the discussion and TIFF’s head of international program Yorgos Krassakopoulos, who welcomed the participants and said: “The idea for this meeting was for a story to be told around the Greek queer cinema by those who built it”.

Initiating the discussion, Konstantinos Kyriakos attempted a brief historical resumé for the Greek queer cinema, linking it with practical matters such as the film selection and thematology. He spoke about the great sense of responsibility that he felt as the tribute curator, since he tried to see the term “queer” covering not just homosexual themed films, but those carrying a specific political position and a broader aesthetic approach not necessarily related to homosexuality. Mr Kyriakos made mention to Nikos Koundouros and his film Vortex or In The Face of Medusa, a relatively ignored film, as he said, and to Orestes by Vassilis Photopoulos, and noted that in the early years after dictatorship in Greece the main concern of film directors was how to combine their sexual and political identity. At the time there were films dealing with serious political matters, or meeting many obstacles to their distribution and ending up screening only in festivals. As he said, “they are sensitive films that redetermine the sense of gender, which eventually came into the limelight”. Mr Kyriakos then talked about the 80s, “with films introducing us to more explicit times, with any positive and negative nuance this term may have”. After mentioning examples such as Giorgos Katakouzinos’ Angelos, he went on with a new series of queer films that “reexamine the subject of ancestry, combining history with urbanism or the Greek countryside». As to the boom of the so-called new queer Greek cinema, he explained that film themes are now broader, either because filmmakers take different stands, or because they win more prizes and prestige in festivals. As he noted, in the 21th century thematology widened to include issues such as immigration, religion and national identity. “What we tried to do with this tribute was not focus just in aesthetics, but also in building a genealogy on the basis of representativeness, so as for filmmakers not to feel betrayed”, he concluded.

Consequently, the film director Iris Zachmanidi noted that she and many other filmmakers were initially inspired by the professors in Stavrakos Film School where they were studying, in an attempt to make less conventional and more ground-breaking films in the 70s. Her final year film The Vest, screening in the tribute, was made in 1976 in 35mm and screened in the then Thessaloniki Film Festival the same year. “At the time, there were three of us that represented this generation of filmmakers: me, Takis Spetsiotis and Leonidas Papadakis. Those times were very intense. On the one hand we had the echo of May 1968 in France, while on the other the big flower children movements in the USA. In Greece we had the Polytechnic uprising. It was a period of broader call to freedom, which pushed us to address new topics. The famous Ratka bar in Athens also shaped us. That’s were we used to meet and talk for hours”, the filmmaker noted. She made special mention to some people who she described as the real pillars of queer movement in Greece: Andreas Velissaropoulos (founder of the Queer Liberation Movement - AKOE), and Betty Vakalidou, a transvestite, who was claiming a prostitution license, which was the only profession available for those persons at the time.

Takis Spetsiotis, who takes part in the tribute with the films Lisa and the Other (1976), La Belle (1977), On the Cozy Side (1981) and Meteor and Shadow (1985), noted in his turn that in the mid-70s, when his own career started with short student films, the word “queer” was completely unknown. He had to wait more than 30 years to finally see his films being academically analyzed, as he said. And added: “We grew up during dictatorship in our effort to claim liberties. Sex and politics were inevitably our topics. For me, the word ‘queer’ is magical, since it is surrounded by darkness”. Mr Spetsiotis also noted that this particular tribute is a very bold attempt, since it not only focuses on many short films, which are a mostly ignored category, but also highlights an invisible side of Greek society, with problems that trouble it deeply, whether it admits it or not. He also said that he was happy to see such an attendance and warmth at the festival.

Konstantinos Giannaris was the next to speak. His films Trojans (1990), Caught Looking (1991), North of Vortex (1991) and A Place in the Sun (1994) are part of the tribute. He spoke about the meaning of queer, which -as he said- began as an insult and ended up describing a conscious diversification of one’s position and sexuality inside the homosexual community itself. “In our eyes, the old gays were looking very conservative and bourgeois. Nevertheless, there is a big problem with the queer movement: the big advances as to rights and diversity took place through a very conservative option by the gay community to promote issues of partnership and marriage between homosexuals, in a period when everyone around us were dying from AIDS. These were the ones who succeeded in changing the political agenda. The most conservative part of the gay movement changed radically and universally the way they saw gays”, he said. As he noted, the thematology of his films widened later to include the immigration problem. This is how the conception of the person who prostitutes can be linked with immigration policy in a country that is acting like a ‘wave breaker’”, he said.

On his part, the filmmaker and scriptwriter Panagiotis Evangelidis, whose film Diptych-The Love That Dare Not To Love (2011) is screening in the tribute, noted: “It is the first time I attend an official event where I’m allowed to speak for these matters. As to my films, I was always interested in other people. First my own people, and then everyone else. It felt sad knowing that some people’s story had never been heard. I wanted to share these stories, first with my own people and then with everyone else. And at the same time present my own story”.

On his part, the film director Panos Koutras (The Attack of the Giant Moussaka, 1999 and Strella, 2009) made special mention to the part that AIDS played for the rights of the queer community. As he said, the term “queer” always had a political nuance, but it was the death of people from the virus that led to actions which set the basis for the acknowledgement of the right to diversity. “Queer is important to me because it sets the boundaries to a culture ranging from Oscar Wilde to Hans Christian Andersen. What is happening is also very important for young people who grow up now. Thanks to these works and tributes they can address a documented culture. We, on the other hand, were growing up differently, since we had to claim our own story, which at times made us aggressive. In the queer cinema there is a wider disposition for claiming ideas in an aggressive way. Yet all participants in this tribute have a strong connection to each other”, he added.

On his part, Angelos Frantzis talked about the tribute’s importance for the Greek queer cinema and the cinematic form of queer films. He stressed the way that form creates a queer character both independently and in relation to the film content. He also said that his film In the Woods (2010) is about bisexual identity and noted that he considers it very interesting when the form eventually besets the content, pushing a film to the limits of what we call cinema. “Let’s be honest, though. At the moment, a queer film is considered an advantage, not disadvantage, in a festival”, he concluded.

Consequently, the film director Kyriakos Hatzimichailidis noted that, watching his film Men Don’t Cry (2001) screening here, is perhaps the first time he feels he made a queer movie. He also talked about the influence of Ratka bar, as well as the surrounding atmosphere affecting the filmmakers at the time. While they were killing time at Kolonaki Square, as he said, they watched typical queer figures, such as the noted transvestite Maria Kallas, pass by, and those images played their part in forming a particular view and aesthetics. “The social influences each one had were the ones that shaped their style, while in the background tragic things began to happen: our friends got uglier, hospitalized and died from AIDS. You end up wondering what urges you to make a queer film. I was motivated by this time of distress, for instance when someone finds out something, when he first learns that he suffers from the virus. In my opinion, the social dimension played a big part, perhaps followed by politics”, he said.

The last to speak was Haris Papadopoulos, who talked about his film Poste Restante Omonia (1982), which is also screened in this tribute. He noted that the film had hardly touched the audience and its shootings proved to be challenging. After claiming that the film topic was chosen “innocently”, he reflected upon the similarities and differences between the then and the current Omonia Square: upon racism then and now, and the misfits of the 80s and of today. As he said, queer sequences can be detected in many films of different background, and concluded that “just because someone is homosexual doesn’t mean he makes queer or gay films”.