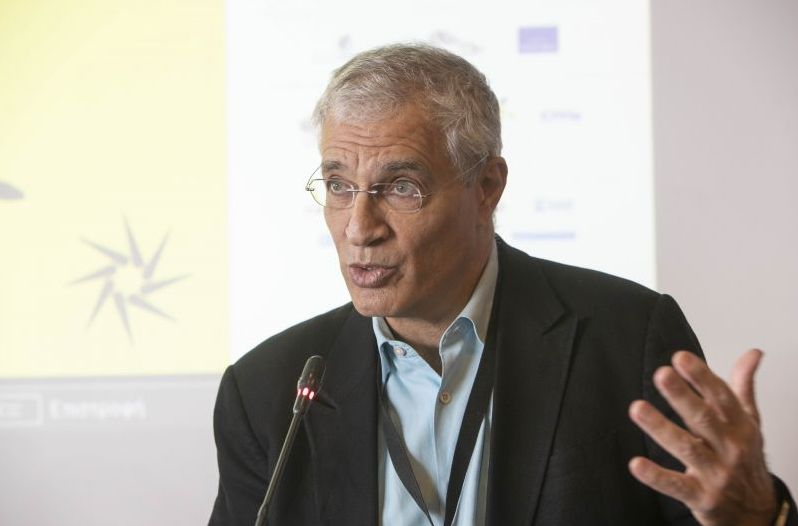 Oscar-winning Greek-American director Louie Psihoyos gave a press conference on Saturday March 2nd 2019, at the Thessaloniki Museum of Photography, as part of the 21st Thessaloniki Documentary Festival. The director came to Thessaloniki on the occasion of the carte blanche given to him this year by the TDF to select and present to the audience ten of his favorite documentaries. He is also receiving the festival’s top honorary award, the Golden Alexander, for his contribution to cinema, while a special screening is organized for his documentary The Cove (2009), which records the mass dolphin kills in Japan and won the Academy award for Best Documentary, in 2010.

In the press event, moderated by the Thessaloniki International Film Festival Head of International Program Yorgos Krassakopoulos, Louie Psihoyos spoke warmly of Greece, saying that it reminds him of his childhood in a small Greek community in the US, where love and humaneness prevailed. As he said, “I feel that Greeks possess the light that leads to love”.

Louie Psihoyos remains a passionate documentarist, while at the same time loyal to another big love of his, photography, which he has served for almost 20 years as a contributor to National Geographic. Speaking about his special connection with photographic camera, he remembered how he made his first steps into photography: “My father moved from Greece to the US in the 1950s. He worked hard and made something of himself. When I was a child, I used to help him whenever I could. However, I did want to do something by using not just my hands, but also my brains. So I took photography lessons and worked as an intern for a while in a local newspaper”.

A lifelong dream of his was to work as a photographer with National Geographic, which he eventually achieved. “There are 3,000 photographers in New York. National Geographic always picks out the best. I started there when I was a student, taking part in a traineeship program. Soon, people there singled out my work and hired me as a contributor”, he said. Among the subjects he helped bring to light as a National Geographic photographer was waste utilization and recycling: “This project started out as a joke, but soon turned out to be a serious proposal which was submitted and promoted. Until then, there was only one basic recycling program in the US. With our research work we managed to raise awareness to the magazine’s subscribers and subsequently to a big part of the people who read it. This is how we contributed to starting recycling programs on an organized basis, as well as to making research and scientific studies on the subject”.

As a documentary filmmaker, Louie Psihoyos believes it is crucial to be able to raise awareness and motivate a 10% of the population through his work. As he stressed out, “In the US, a film is considered successful based on its rankings at the box office and the profits it brings. For me, it is successful if it can motivate a 10% of the population. I consider cinema a critical weapon of mass motivation. This 10% is a sufficient number of people for me to be able to raise concern, motivate and ultimately bring upon useful social changes”.

A perfect example of this is his documentary debut The Cove, for which he said: “The Cove helped us reveal a story which was not widely known -the mass dolphin kills in Japan- and change things. We motivated the public and managed to decrease dolphin kills by 93%”. As for the film’s distinctions -such as the Academy award for Best Documentary- Mr Psihoyos noted that even though he spent a lot of years trying to build the self-confidence you need in order to be a cinematographer, his film became such a success that it was being awarded once a week. “I honestly didn’t know how many awards a film can receive. I had prepared a beautiful speech for my first award and suddenly I saw that I kept getting distinctions. I felt that I had to think and write something special each time. Until one day I realized I had to come forward, give speeches, and contact important film directors and equally important distributors. Of all this experience I kept a quote by film director John Ford, which I actually used in one of my speeches: ‘Making a film is like painting a picture, only with the help of a whole army’.”

As to the reactions to this particular film screening in Japan, where the story unfolds, Mr Psihoyos said that despite its screening in the Tokyo International Film Festival and its distribution in Japanese theaters, the reactions were huge, mainly by conservative and ultranationalist circles. “It was impressive to see how these groups were protesting outside the theaters, which resulted in many screenings being suspended. What impressed me even more was the way they bullied the distributor and his family with threats about their safety. However, the film’s subject managed to stand at the heart of a national debate. The film was screened not only in Taiji, where the story unfolds, but even in Japan’s diplomatic corps, raising awareness about dolphin protection”, the director said.

What does he think about the fact that his films send a strong message while at the same time remain attractive to the audience? Mr Psihoyos replied: “A film producer asked Jacques Cousteau once: ‘If I give you my money, what will I see in your film?’ Personally, I always begin with an idea about what I wish to do, but I never know what I will come across. I feel that each documentarist is constantly challenged to discover new things”. As to how hard it is for documentaries to find distributors, as well as his own relation with the audience and his films’ funding, the director said that he does not make films for profit, but to get closer to the audience. And added: “I think we need distributors, as well as sponsors. However, when they ask me about money, I reply: ‘I want your money, but you won’t take it back’. I want my films to be screened everywhere, all over the world. So a screening on Netflix is not enough for me. I want my films to be screened on all networks, either National Geographic and Discovery or Disney”.

Speaking about the ten documentaries he selected as part of the Carte Blanche program, Mr Psihoyos noted: “I believe that these films give the people who see them an opportunity to change the way that they see things around them. These films deal with climate change and our relation with the environment, but the most important for me is our relation with the planet via small changes we can make in our everyday life. Perhaps the most important among them is changing our diet, which not only improves our health, but also protects the environment”.

Trying to give an answer to the question posed by the 21st TDF’s tribute “Why Look at Animals?” Mr Psihoyos said that man is a species among many on planet Earth, and noted: “Being called Homo sapiens does not mean we are the cleverest species. I don’t know how ‘sapient’ it is to destroy the planet. Personally I think there are other species, more adaptable to the changes occurring. However, it is important for us to understand what scientific research is saying, that by the end of this century half of the species that live on Earth may vanish. We are not the prevailing species; still, we must provide for the future of the human generations to come”.

Mr Psihoyos was also asked about US policy on climate change, as well as Donald Trump’s interventions on this debate. His reply: “I happened to meet Trump long before he became President. The truth is that he has caused a huge damage to America, since many people feel that they cannot rely on a government with such policies. However, the important thing is that 7 out of 10 of his voters do not even believe in climate change. I want to believe that Trump will at some time disappear from politics”.