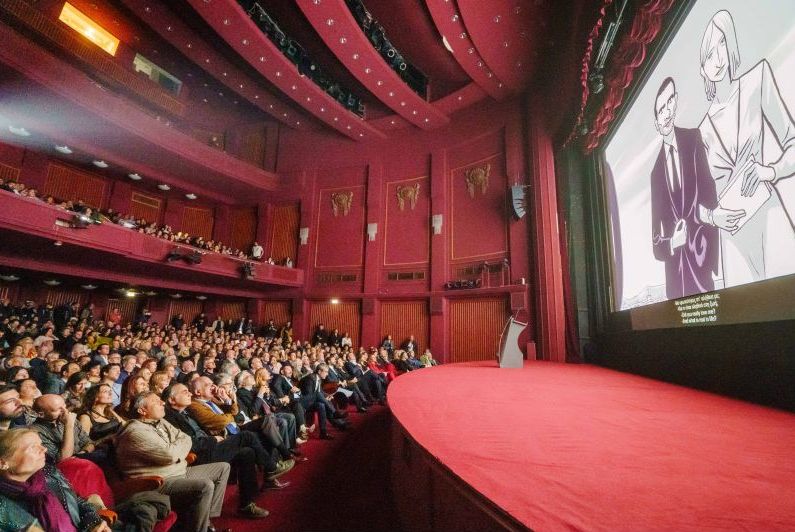 In a festive mood and with two special presenters, Daria and Sotiris, the heroes of the “Festival” comic book, the opening ceremony for the anniversary 60th Thessaloniki International Film Festival took place on Thursday, October the 31st, in a packed Olympion.

Opening Ceremony: A celebration with the gaze directed to the past and future of TIFF

In a festive mood and with two special presenters, Daria and Sotiris, the heroes of the “Festival” comic book, the opening ceremony for the anniversary 60th Thessaloniki International Film Festival took place on Thursday, October the 31st, in a packed Olympion.

“We are not real of course. And what is real in cinema? The magic is real…and our love” said the two characters of the comic, created by Giorgos Gousis, Panayiotis Pantazis and Georgia Zachari. In order to give the floor to the ‘experts’, they then called on stage the General Director of the Festival Ms. Elise Jalladeau and the Artistic Director of the Festival Mr. Orestis Andreadakis.

“Sotiris and Daria are not real people, yet they live among us” noted Ms. Jalladeau, while Mr. Andreadakis underlined that these two comic characters represent the audience of the Festival, “the eyes that open in the dark and encounter the whole world upon a white lit sheet, the ears that listen carefully to the whispers that come from the future. Sotiris and Daria are the Festival’s history: ‘Techni’ Art Society and Pavlos Zannas, Doré and the Society of Macedonian Studies, Pallas, Mylos, the second balcony, the great stars and awards, the promenade and Warehouse C”, he added.

In reference to the future of the institution, the Artistic Director of the Festival inaugurated a new department, Meet the Future, and showed a video of fourteen young Greek directors, the crew of this new department, that have already participated with their short films in the most prestigious festivals around the world and are presently in the process of making their first feature films.

Ms. Jalladeau added that in order to introduce this hopeful new department, the Festival asked the help of Ms. Lena Savvidi, film critic, writer and member of the jury for the 1st Week of Greek Cinema, held in September 1960; the woman that “organized the first screenings, wrote criticism, saw the birth of our Festival. Lena Savvidi is today ninety-one years old and she keeps on dreaming”, Mr. Andreadakis noted. After a short video where Ms. Savvidi prompted the new creators to do exactly what they want, to try out new paths since the process of movie making is completely different nowadays, Ms. Jalladeau and Mr. Andreadakis, having wished happy anniversary and a merry festival, gave the floor again to the digital hosts of the evening who, having reminisced on the first day of their meeting, invited on stage the next speaker, the Regional Governor of Central Macedonia, Mr. Apostolos Tzitzikostas.

The governor welcomed the audience to the Festival and to Thessaloniki. “Through the significant trajectory of sixty years, the organization has evolved and established itself as the most important, internationally reckoned film institution in Greece. The Festival welcomes once more the creators and the friends of cinema, with stimulating screenings and an abundance of parallel events that accompany this big organization”, he continued. “Moreover, our purpose is a great one: make Central Macedonia a pole of attraction, development and fruition for top-tier film and audiovisual productions of international magnitude. We are already the first District in Greece that has created and runs a fully staffed film office, a modern-day structure of networking and collaboration with Greek and international companies that wish to invest in television and cinema production”. Moving on, Mr. Tzitzikostas said that while visiting LA he had the opportunity to converse with upper-echelon executives of companies such as Netflix, HBO, Walt Disney Studios and Paramount and they expressed a pronounced interest in investing. Finally, the Governor claimed that Millennium Films agreed to creating a studio in Thessaloniki, with the site already picked and construction work beginning presently. “During the next days and in the frame of the Thessaloniki Film Festival a first official presentation by the company will take place,” he added.

Mr. Zervas, comparing the “New Thessaloniki” to a movie that now begins to unravel before its audience, he insisted on the determination of the municipality to alter past mentalities and to transform the city in an ideal place for working, living and visiting. “Our wish is for people to talk of an orderly Thessaloniki that is respectful towards public space, public transformation and the charming – as much of historical interest – promenades; of universities and students, of culture and gastronomy, of hospitality and of cosmopolitanism. We hope, we want and we fight in order for this “movie” to earn a place in the heart of all citizens, of all the Greeks and – why not – we hope that we will hear the much-desired “and the Oscar goes to… Thessaloniki».

And he added: “The Festival for sixty consecutive years is a window constantly open to the world, for all of us; it is at the same time the proof that in this city each time we transcend ourselves we can lead our city to a loftier place. The Municipality of Thessaloniki supports and will continue to support the festival in all possible ways and even more than has been done up to this point, for this Festival is not the affair of a municipal body, but of every one of us. I profoundly believe that the Thessaloniki Film Festival is a paradigm apart in how culture can become a developmental factor for our local economy. Sixty years is just a good start.”

In what came next, the two hosts invited the General Secretary of the Ministry of Culture and Sports, Mr. Nicolas Yatromanolakis. The General Secretary pointed out first the contemporary character of the Festival, emphasizing that this does not concern what happens on the screens only, but also in the foyers, outside the theaters, what happens in the whole city. “A Festival that has accomplished to be the pulse and the imprint of its era, but also to be one step ahead”, he distinctively mentioned. He then noted that cinema has long since conceived that the political and the personal can coincide and that is why it is a medium that can immediately touch and move, because it voices what the viewer cannot, it has provided answers but consolation also when the viewer was lonely. “The Thessaloniki Film Festival has always honored this role, with a pioneering gaze”, he concluded.

After Mr. Yatromanolakis ended his greeting, it was Ms. Savvidi’s turn (via a new video) to inaugurate officially the 60th Thessaloniki Film Festival. “I am the only one alive since the first Festival; I was thirty-two years old at the time, a time when people did not live past seventy” she added, moved. Hereupon, the projection of the Festival’s opening film, “Wedding Story”, by Noah Baumbach, began, while after the film the opening party followed, on Warehouse C at the docks, with a live by Larry Gus and a dj set by Matina sous Peau.