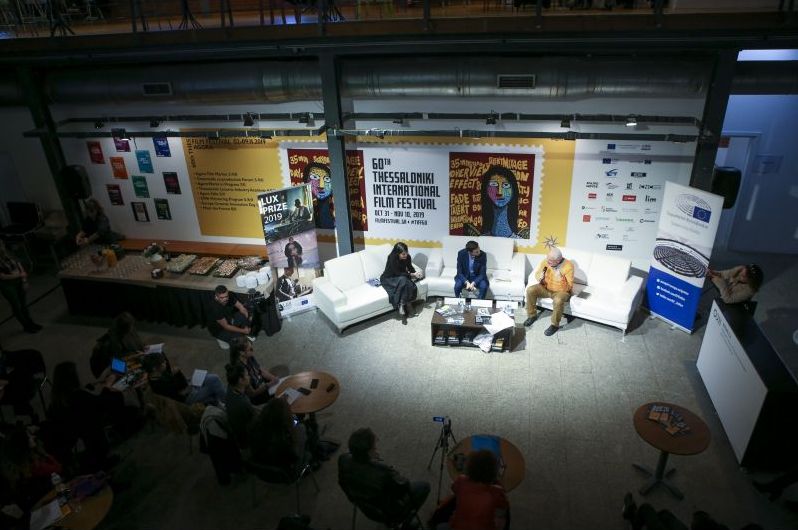 On the occasion of the screening of the three finalist films for the LUX prize in the 60th Thessaloniki International Film Festival, bestowed annually by the European Parliament, a press conference took place on Friday, November the 1st, in Warehouse C.

In the panel participated Yorgos Krassakopoulos, Head of International Program and member of the selection jury for the nominated films for the LUX prize and Teona Strugar Mitevska, director of the film God Exists, Her Name is Petrunia. The panel was coordinated by Haris Kountouros, head of the PR Office of the European Parliament in Greece.

Mr. Kountouros stressed that “although 60% of the films screened in Europe are European productions, only 30% of the filmgoers watches European movies. Many of them are not screened beyond the borders of their country; the issue of language remains a big problem”. He also noted that the three finalists for the LUX award secured free subtitling in all 24 official languages of the EU, while the winner will be subtitled for the hearing and visually impaired.

Yorgos Krassakopoulos underlined that for the eighth year in a row the Festival hosts the three finalist films for the LUX prize. “We are looking for films that promote European ideas and the art of film. These films will reach a larger audience”, noted Mr. Krassakopoulos.

Mr. Kountouros observed that “all three finalists this year tackle issues of power, corruption and the troubles of politics.”

The filmmaker Teona Strugar Mitevska from North Macedonia was then invited to describe the storyline of her film, focusing on a woman that decides to dive in the waters of her provincial hometown on Epiphany Day in order to catch the cross. Ms. Mitevska explained: “It is impossible to be born a woman and not be a feminist, to be born a man and not be a feminist. Feminism has to do with equality, egalitarianism and justice for all, in a better world for all of us.”

To the question whether cinema has the power to lead to social change, she answered: “I am not sure we can change much, but I won’t stop trying. The aim of an artist is to provoke, to be ahead of society, to touch on issues that are taboo. My aim is to be brave and to provoke, in order to trigger change. We shouldn’t of course forget that cinema is a visual art and that is why it is important to play with form and use the form of cinema for the best results.”

According to the director, the LUX prize gives the opportunity of wide distribution for the finalist films. “Every day we have to deal with Hollywood that occupies 70% of screenings in theaters. The LUX prize tries to bring European films to European theaters and that is the biggest challenge. We are not making movies for us and our friends, but for the audience. Subtitles contribute significantly, because this remains a costly enterprise. I always touch on political issues and this award has to do with education, with the edification of politicians, so that they know what is out there, what we filmmakers do. Sometimes I get the feeling that politics are becoming increasingly elitist. If I become elitist, my movies will be horrible, that’s why the exchange between politicians and filmmakers is so important”, she emphasized.

Ms. Mitevska made clear that the film was based on real events, on an incident that happened five years ago in her country. “I was annoyed by the way the press was presenting the story, presenting the woman as a caricature, that was not a real conversation. For me it is important to talk not of good or bad men or women, but for the generation gap. The hero is an anti-hero, she is the only one that escapes the weight of tradition, and it is this education that gives her the power to free herself. Her life in the city eventually became insufferable, she obtained a visa and moved to London where she lives to this day.”

To a question concerning the refusal to open membership talks for her country by the EU, Ms Mitevska answered that this outcome left a bitter aftertaste, since, as she said, “I see the future of my country as part of the European community. Our society faces problems like corruption, but to be a part of Europe would usher us to the right direction for more democracy.” When asked to comment on the Prespes Agreement, she said: “We accepted the agreement. Our two countries lived through absurd times. For many years there was no dialogue between us, although we are neighbors, in reality we are alike, more than we would like to admit. The agreement concerns a change of name. Yes, I voted too, because I vote for the future. This is the only way to move forward. I believed that this would be a painful process, but this is not a strain anymore.”

Answering in what ways the LUX prize will reinforce the European political conscience, Ms. Mitevsla responded: “The beauty of cinema is exchange, the sharing of our experience. Sometimes experience can be beautiful and funny, at other times it can be hard and a burden. By narrating our stories, we also share our cultures. This exchange is crucial in order to better understand each other. My film would never have had the chance to secure distribution in 24 languages. My country is too small, with two million habitants only, and this is a great opportunity to screen the film in the rest of Europe.”

The presentation of the prize will take place on November the 27th, during the plenary session of the European Parliament in Strasbourg. The audience can vote for the film of its preference on the luxprize.eu site or on the Facebook page of the LUX prize. The audience award will be announced during the Karlovy Vary Film Festival in July 2020.