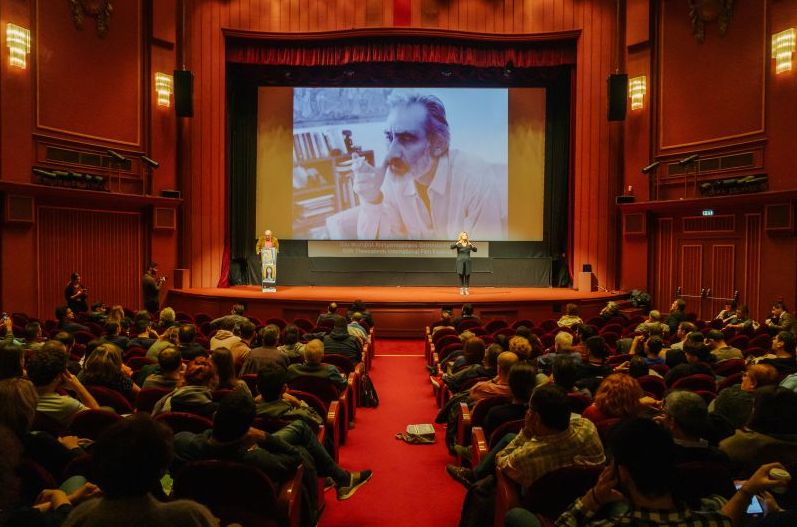 Special Screening: In the Shadow of Fear, by Giorgos Karypidis

Emotions ran high at Olympion theater, as the 60th Thessaloniki International Film Festival honored the memory of director Giorgos Karypidis (1946-2019) on Saturday, November 2nd, with a special screening of his film In the Shadow of Fear. The Artistic Director of the Thessaloniki International Film Festival, Orestis Andreadakis preceded the event by stating that the screening was completely accessible, that is equipped with audio description for the visually impaired and subtitles for the hearing impaired and deaf.

Mr. Andreadakis went on to invite the writer on stage, screenwriter, translator, filmmaker and vice-president of the Thessaloniki International Film Festival BoD Achilleas Kyriakidis, who talked about the work and the personality of Giorgos Karypidis, a close friend of his. Beginning with the short film Last Station Kreuzberg, screened and awarded at the 1975 Thessaloniki Film Festival, which stands even nowadays as a landmark movie, an exemplary sociological documentary , since Karypidis, a modern-day ingenious Ulysses, does not allow himself to get carried away by the siren song of cheap sentimentalism and demagoguery”, as he said. Mr. Achilleas Kyriakidis then ran through the director’s body of films, evoking its most important turning points and its unique value. Recalling Christian Grainville’s bon mot, that “the precise formulation of the auteur theory is that each auteur makes a film by remaining faithful to his obsessions”, Mr. Kyriakidis pointed out that “nothing prevents us from the diagnosis that Karypidis’ obsession was escape. Karypidis’ heroes are as if trapped in a never-ending centrifugal movement, a Sisyphean endeavor to break through, to change, to know themselves and others.”

Speaking about the film In the Shadow of Fear (1988), screened at Olympion, Mr. Kyriakidis labelled it “a masterpiece” and stressed: “Karypidis dresses the Laestrygonians’ allegory in a thriller’s cloak (a musician, Josef K., tries to escape from his persecutors that charge him with forgery one fine morning) and eventually leads things towards a dreamlike, by default incontrollable, path, breaking loose from all imperatives dictated by unalloyed realism. Riddled with touches of inspiration, both visually and screenplay-wise, which do not put the plot/pretense on hold, the movie is granted with a demonic rhythm (and the let the word be read in its full doubled-edged meaning). The film received six awards in the Thessaloniki International Film Festival in 1988: among which for best film, direction, actor in a leading role, cinematography, scenography and music.

Mr. Kyriakidis also mentioned Giorgos Karypidis’ short stories collection Diving Champion, and observed that “if  Karypidis as a director is a filmmaker that meditates par excellence, Karypidis as a writer is a thinker who par excellence  visualizes, while his obsessions remain the same: wandering as escape, death as wandering, escape as death, the ghost as wandering.” Concerning Giorgos Karypidis’ relation to literature, his adaptation of Yannis Xanthoulis’ novel The Dead Liqueur (1992) is more than revealing: “a sotto voce film, tender, that dares open up to dreams and is not afraid of nostalgia”, as Mr. Kyriakidis put it.

The floor was then given to cinematographer and President of the Thessaloniki International Film Festival Yorgos Arvanitis, who, quite moved, referred to his collaboration with Giorgos Karypidis in the film In the Shadow of Fear: “I had the luck to get acquainted with him as he chose me for his movie;  I got to know him little by little and we enjoyed a happy collaboration. From the first to the last day we shared the same views, the same passion which was mirrored in the film. This collaboration earned me the Festival award, and I thank him for this honor”, he stated.

The event drew to its end in the presence of Rania Brilaki, wife of Giorgos Karypidis, who was in a state of emotional turmoil due to the recent loss of her beloved husband. “Giorgos’ vision was immense and went far beyond the limits of artistic creation: he envisioned and strived for a world of justice, free of poverty and human exploitation. He stood by it with every thread of his being, both in his films and his writings, and well as in his way of living, on a daily basis”, she said, making a special mention to his generosity, his love of beauty, his erudition, his close affinity with books. “He had an excellent knowledge of world history, people’s cultures, and of contemporary political and social developments”, Ms. Brilaki concluded, thanking the Festival for honoring her belated husband’s memory.