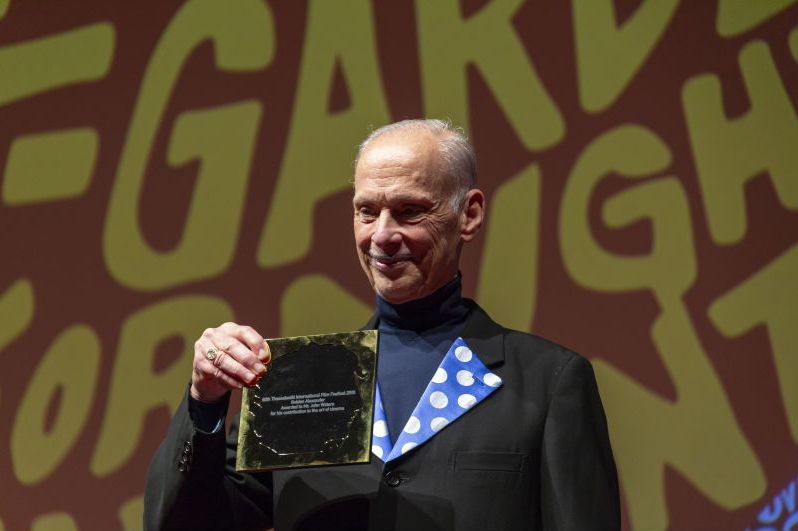 On Friday, November 8, 2019, in Olympion theater, legendary director John Waters, a true cult cinema icon and star guest of the 60th Thessaloniki International Film Festival, received in a special ceremony the honorary Golden Alexander award for his contribution to the art of cinema.

On Friday, November 8, 2019, in Olympion theater, legendary director John Waters, a true cult cinema icon and star guest of the 60th Thessaloniki International Film Festival, received in a special ceremony the honorary Golden Alexander award for his contribution to the art of cinema.

The Artistic Director of the Festival, Mr. Orestis Andreadakis, welcomed the famous artist on stage by saying: “They have called him the Pope of Trash and the King of Bad Taste but after having the pleasure of getting to know him these last days, I think the one that fits him most is the coolest man in the history of cinema. He is a man who has made films on his own unique way, who shocked us through laughter and told us to be ourselves no matter what anyone else thought.”

The President of the Film Festival and award-winning Photography Director, Giorgos Arvanitis, awarded John Waters. «On behalf the Thessaloniki Film Festival I have the honor to award you with the Golden Alexander for your contribution to the art of unconventional cinema».

John Waters thanked the Festival. «I know that the Film Festival is celebrating its 60th anniversary, but I am celebrating my first-ever visit to Greece. I would like to thank the festival’s amazing stuff for giving me such a warm welcome and having a well-run production. They have spoiled me from the first moment I have arrived. I would like to thank the Artistic Director, the President and all the others but especially my personal bodyguard, Melin. Thank you all for honoring my cinematic trash and giving me the chance to spread bad taste internationally. And also, for letting me show my good taste with the other other extreme films I am sharing here in the Carte Blanche. The most important is that I got to meet my wonderful Greek fans. They made me feel so nice. And I thank you, without any irony, for this wonderful award».

The director presented the film Female Trouble, that the audience had the opportunity to watch. «The story of Dawn Davenport, thief, bad mother, murderer and lunatic. Divine was not only a good actor as you will see in this movie. He was also a great stuntman. He had sex with himself. He swims across a raging river in November in the winter in full drag and hits his mark on the other side. Also, he took trampoline lessons so he could do a flip and say dialogue at the same time. So, I would like to dedicate this night to the great memory of Divine», an emotional John Waters.