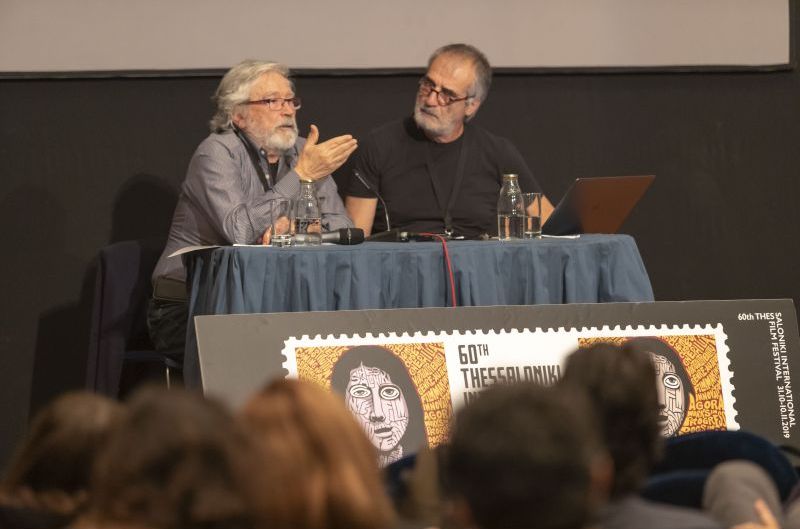 Mr. Frentzos thanked the Festival and Mr. Arvanitis. Briefly recalling Mr. Arvanitis’ life, he mentioned the hard childhood years (Mr. Arvanitis was born in 1941), his guerilla father, his mother who was a political prisoner during the Civil war years, his growing up at New Penteli, and the odd jobs he had to take (he worked in a dairy and as waiter), until he started working in Finos Film movies, first as a technician, and then as director of photography. At a certain point, in the late 60’s, his prime, long-running collaboration with Theodoros Angelopoulos began with Anaparastasi in 1970, and included films such as The Weeping Meadow, The Beekeeper, and Eternity and A Day. In 1989, he decided to go to France, where he worked in forty-four films; he remains active to this day, with one hundred and eleven films in total.

Taking the stage, Mr. Arvanitis stated that this year’s anniversary Festival, is cause for celebration for him too, since his involvement with cinema began in 1959. “Times were hard and I never went to a film school, but I ultimately succeeded. I was lucky enough to meet very important people that were of great help. During the first period of my career, working for Finos, I plunged into glamor, feathers and cushions, and Aliki’s huge eyelashes! The protagonist had to appear flashy on film, and that was not how I was inclined to do it. Only during the shooting of small scenes, I tried to express my style. The big shock, of course, came when I started collaborating with Angelopoulos. I remember that it was during the shooting of Days of ’36, that I had to do at the same time a film at Finos with Rena Vlahopoulou. When I got to the set, I saw that the whole scenography, the colors, but also Rena’s dress, were blazing green, and it was at this point that I said “I can’t do this anymore, I’ll leave, even if I’ll have to starve”. Eventually, this proved to be a good decision. I worked with a lot of people, and at a certain point, when the Greek film industry got through a major crisis, I decided to leave. I didn’t want to do commercials. So, I fell into the big arena of working abroad, but I was lucky”, he added characteristically.

When asked to give advice to young artists, he responded that it depends on who is asking; if it is actors, he said that they have to be very meticulous in what they do: while an actor can perform better on stage on certain days, in cinema things are different, one has to be perfect all the time. On directors of photography, he stated that they have to be on close terms with the director, “to turn his dream into images. Proper lighting is ultimately what makes for proper cinematography. This calls for daily struggle, but this is what our job consists of: sculpting the light.” Having insisted on the fact that the cinematographer’s aim consists of putting into use all available techniques in the service of an aesthetic result, he added that a cinematographer’s job is to stand by the director and be at all times perceptive to his needs. He described the director as an orchestra conductor, and the cinematographer as one of the first violins. “Of course, the relationship between us can be strained; directors are afraid that we’ll trump them. Besides, what is the difference between God and a director? God never said he was a director!” he joked.

To the question whether it is money that makes a film good, Mr. Arvanitis said that this is not always the case, because there are excellent films made at a very low budget, for example Locke, by Steven Knight. “If you want to make a good film, you will need three things: a fine screenplay, a fine screenplay and a fine screenplay” he purposefully added. Going into the topic of new technology and digital cinematography, he emphasized that, in his opinion, not many things have changed. A director does not instruct the actors to move in a different way, so the director of photography works in almost the exact way he has been working in the past. Yet, he stated that there is a need to adapt to the demands of the digital era. “Young people nowadays watch films on their mobile phones. There is some progress. Classical cinema, in the sense of shooting on film, is regarded in the same way as the opera”, he added.

Having been asked yet again what would be his advice to a director making his first film, he answered that a director should care for and love every frame as it would be the last one in the whole world; he then went on to screen a series of four short videos, and comment on the aesthetic and technical choices he made. The videos chosen were excerpts of the following films: Total Eclipse, Fanny Lye Deliver'd, A Crime and Blind Sun. He explained the huge difference between natural and artificial light and spotlights, saying that there are ways to harness natural light, but in that case, one needs an even closer collaboration with the director, and noted that especially for the third video in the series he worked with reflections in particular. He also mentioned that he held Dinos Katsouridis in high esteem, labelling him “a master”, while he added that in the majority of the films he worked for, he was a cameraman as well. “I work in what we call low budget cinema. I don’t allow myself any grand luxuries. I adore old lenses. I feel that I can film anything with them”, he added.

Drawing the talk to its conclusion, the seventy-eight-year-old director of photography stated that he still feels anxious every time a film of his is coming to a theater. “Every film is special, a new challenge. I am still impressed by the potential offered by light and shadow, by colors too. What is essential is that we technicians, or, even better, we that move between art and technique, we must use all available means in order to faithfully serve aesthetics and emotion. So, one should talk of the aesthetic, and not the technical result”, he concluded, while the audience cheered.