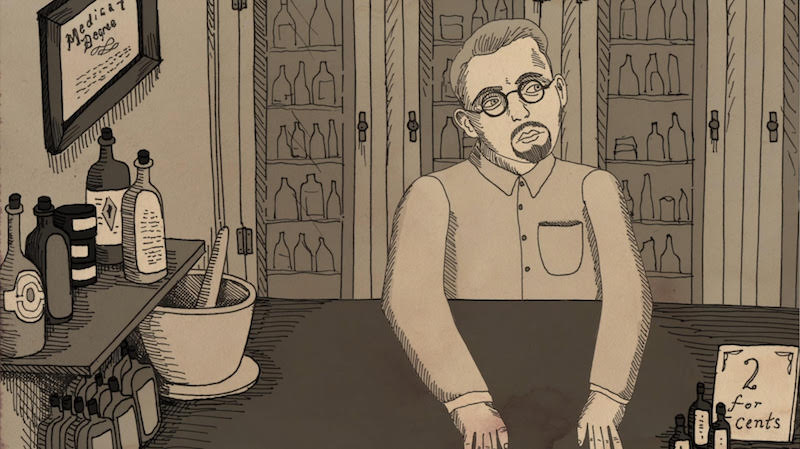 The 22nd Thessaloniki Documentary Festival (5/3 – 15/3/2020) presents an extensive tribute to animated documentary, a surprising hybrid sub-genre that has grown rapidly in the last few years.

The tribute includes a selection of short and feature animated documentaries and its aim is to bring out the use of animation as a tool for representation, showing the different functions and techniques.

Comedies, thrillers, portraits, contemporary narratives: Animated documentaries are as versatile as life itself. Animation offers creative freedom to directors, brings History to life and changes the art of documentary.

The full list of films will be announced soon.

Israeli director Ari Folman is battling the ghosts of the past, through the autobiographical Waltz with Bashir. Almost 26 years after the Lebanon War and the massacre of thousands of Palestinians in the Sabra and Shatila refugee camps under the eyes of the Israeli soldiers. Folman who was a young soldier during the Lebanon War makes a dark journey to the bloody September of 1982.

The animated documentary feature-length Crulic – The Path to Beyond tells the story of the life of Crulic, a 33-years-old Romanian who died in a Polish prison while on hunger strike. The acclaimed Romanian actor, Vlad Ivanov, narrates Crulic’s ironic voice over from beyond the grave. A strong visual style, the result of beautiful hand drawn, collage, stop-motion and cut-out animation techniques, blend to create a striking, surprisingly integrated and memorable film.

Is the Man Who Is Tall Happy?: An Animated Conversation with Noam Chomsky by Michel Gondry, 2013, France, 88΄

An unlikely pairing of form and style, Michel Gondry’s animated documentary successfully gives Noam Chomsky’s philosophical musings an expressive canvas with a delightfully anarchic animation style. The film’s real topic is the elusive nature of all thought processes, and it effectively shares the dual speakers’ collective journey without revealing any tangible destination. The movie ends, but the discussion resonates indefinitely.

The Wanted 18 by Amer Shomali and Paul Cowan, 2014, Canada-Palestine-France, 75΄

This feature film incorporates live action footage with animation to tell the curious story of 18 cows. Acquired by a Palestinian community in the late 1980s, the cows were a symbol of freedom and resistance, providing milk for the Palestinian residents of Beit Sahour so that they would not rely on Israeli producers. Soon the illegal cows, cherished by the Palestinians, were being sought by the Israeli army as a threat to security. With humor and passion, the film captures the spirit of the 1987 uprising through the personal experiences of those who lived it.

The tragic 1915 Gallipoli Campaign of WW1 is told through the letters by six New Zealanders who were involved.

Inventive and wildly fun, the film recounts the mostly-true story of John Romulus Brinkley, a Kansas doctor who in 1917 discovered that he could cure impotence by transplanting goat testicles into men. Mixing hand-drawn animated reenactments, interviews, archival footage, and a highly unreliable narrator, Nuts! traces Brinkley’s rise from poverty and obscurity to the heights of celebrity, wealth, and influence. Nuts! lives up to its title in the best way, offering a delightfully unorthodox look at a bizarre – and largely unexplored – chapter in American history.

On August 1st, 1966, a sniper rode the elevator to the top floor of the University of Texas Tower and opened fire, holding the campus hostage for 96 minutes. When the gunshots were finally silenced, the toll included 16 dead, three dozen wounded, and a shaken nation left trying to understand. Combining archival footage with animation in a dynamic, never-before-seen way, Tower reveals the action-packed untold stories of the witnesses, heroes and survivors of America’s first mass school shooting, when the worst in one man brought out the best in so many others.

Angola, 1975. A bloody civil war breaks out on the eve of the country's independence. Polish reporter Ryszard Kapuscinski embarks on a seemingly suicidal road trip into the heart of the civil war. There, he witnesses the dirty reality of war and realizes the power and ambiguity of his role as a journalist. This experience changes him forever, a reporter travelled to Angola but a writer returns.

Croatia, January 1992. In the midst of the Yugoslav Wars, Chris, a young Swiss journalist is found dead in mysterious circumstances. He was wearing the uniform of an international mercenary group. Anja Kofmel was his cousin. As a little girl, she used to admire this handsome young man; now a grown-up woman, she decides to investigate his story, trying to understand what really was the involvement of Chris in the conflict…

What can a mother say when her son is violently taken away from her? Dennis Tupicoff’s endeavor answers the question – twice. Matthew Easdale was shot dead in a house in Brisbane in April, 1995. His mother, Kathy Easdale, was interviewed for ABC Radio a few weeks later. Using the original radio interview, the film presents the account in two very different ways, showcasing the power of storytelling to deal with trauma: an intimate exploration of the deepest abyss of human soul.

With images that are sometimes abstract or vividly representational, this animated documentary is based on interviews with victims of domestic violence who bravely recount their brutal histories, and, with the help of counselors, take their first steps towards healing.

In Grasshopper, park-bench philosopher AJ Vadehra expounds on astrology and more productive avenues of contemplation. This animated but otherwise unedited fifteen-minute interview film is a good example of what happens when you approach the right stranger with a camera. From the animators of Waking Life.

This Oscar®-winning animated short from Chris Landreth is based on the life of Ryan Larkin, a Canadian animator who produced some of the most influential animated films of his time. Ryan is living every artist’s worst nightmare - succumbing to addiction, panhandling on the streets to make ends meet. Through computer-generated characters, Landreth interviews the animator to shed light on his downward spiral, while projecting his own insecurities.

Four different people tell, in their own words, what it was like to lose their virginity. The diverse experiences recounted in the four different animated stories, some tragic and some comic, are told by both the teenagers and the old people that appear in the stories and they all have one thing in common – it is “never like the first time!”.

Abuk and Machiek are two out of thousands of children captured by the government-sponsored militia during the Civil War in Sudan. In Slaves – an animated documentary, they talk about their experiences from the day they were captured, until the moment they’re released by James Auger Alic and his organisation CEAWC (Committee of Eradication of Abduction of Women and Children).

Told in the form of a travel notebook, the story follows the steps of a Western traveller who is brought face to face with the Malagasy customs and rituals, especially the Famadihana, the ritual of the turning of the bones. The pages turn, the drawings come to life, and the luxuriant landscapes of Madagascar appear one after another. The celebrations may commence… The jumble of sketches and images across multiple styles, recreate that sometimes overwhelming sense of being fully present and stimulated that one gets when placed in such a rich, yet foreign environment.

A descent into the maelstrom of anguish that tormented famed Canadian experimental filmmaker Arthur Lipsett, who died prematurely at age 49. Taking the form of a diary, this animated film charts the meanderings of psychological distress, with clashes of images and sounds evoking the loneliness of the artist’s childhood, his frenzied creations and his dizzying fall into depression and madness. The result is both spectacular and daring: a fragmented and fascinating short film that plunges us into the whirlwind of a mind out of balance – a singular study of what happens when genius is on first-name terms with madness…

The story of the ten-year battle to achieve fair representation for women in the governance of Sierra Leone is revealed by three women from diverse backgrounds. Bernadette Lahai, Salamatu Kamara and Barbara Bangura share their stories of the ‘road blocks’ women face within the world of politics in Sierra Leone. Em Cooper’s exquisite oil painted on glass animation combined with live action video transforms issues of gender and politics into compelling and thought-provoking viewing.

The animated short documentary tells the stories of two men, currently detained in Australia’s notorious Manus Island Offshore Processing Centre. In October 2014, director Lukas Schrank made phone contact with the men, who were able to tell their stories from within the compound. Their interviews offer a chilling insight into the reality of life for the 2000 people currently being held in Australia’s offshore detention centres. Their stories are the voice of the film, guiding the animation deep into the fenced facility of the Manus Island Regional Processing Centre.

Set in Argentina 1960, The Driver Is Red is a true crime documentary that follows the story of secret agent Zvi Aharoni as he searches for one of the highest-ranking Nazi war criminals on the run, Adolf Eichmann.

Flesh is about how women are seen as bodies for disposal, judged as time passes as meat cooking stages. Through the form and texture of real materials such as paint, watercolor, clay, 35mm film and virtual image decomposition such as glitches and datamosh, five women are represented in animation by women animators to highlight the perverse way in which society looks at them.