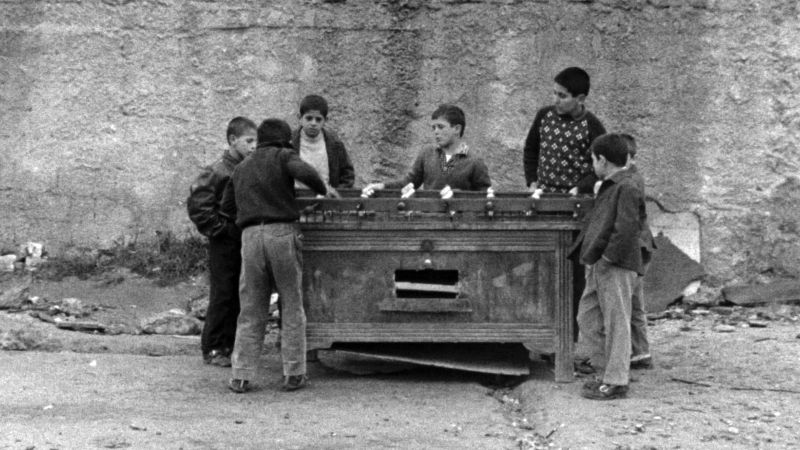 Life at an empty lot in Petralona, Athens, through three seasons of the year. In autumn, an amusement park is set up there; in winter, the lot is deserted; and in spring it serves as a stadium for the school’s athletics festivals, which the regime had turned into another tool of disorientation during the Junta period. A composition of moments of life as it unfolds in one of the underprivileged – at the time – neighborhoods of Athens, where a site comes into its own existence. The passage of time erodes the piece of land, leaving its mark on it, as it would on a human being. Moments of joy and liveliness give way to a rainy melancholy, like changes of mood in the changing of seasons. The exogenous force of profit smashes all this up when a building is erected at the site. The end is inevitable and merciless. In his first sample of live-action cinema, after his notable work in animation, Maragos turns his human and cinematic gaze to the places where nothing seems to exist, and observes the lyricism of an entire existence. Using the simplest means, he authentically renders a human space while ensuring a rare inner rhythm. By turning something so mundane that goes unnoticed into poetry, he gives prominence to its political dimension. “I was showing the degradation of Greek society during the years of the Junta,” he says of the film, which was shot in ’71 and banned by the regime. Maragos, who throughout his career remained true to his anthropocentric vision, presenting audiences with films of great commercial and artistic success, such as Learn How to Read and Write, Son, combines a statement of political convictions with his visual sensibility, leaving a significant legacy. The film will be screened in a newly restored digital copy (DCP), created for the purposes of the event Motherland, I See Υou, with English subtitles and Greek subtitles for the Deaf or Hard-of-Hearing (SDH).