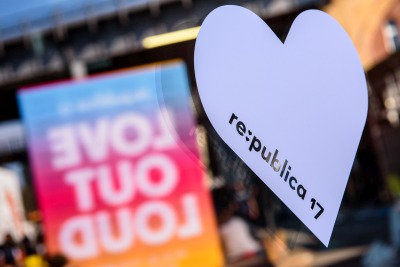 The Thessaloniki International Film Festival is glad to welcome for the first time in Thessaloniki, Greece the Berlin-based re:publica, one of the most important festivals in the world for digital culture, media and the internet.

The re:publica (#rpTHE) will take place in Thessaloniki from Monday 11th to Wednesday 13th September 2017 at TIFF’s venues: the Cinema Museum of Thessaloniki (Warehouse A), as well as the Stavros Tornes and John Kassavetes theatres (Warehouse C), located at the city’s Port.

re:publica is a multifaceted international event that welcomes all audiences, attracting annually thousands of visitors and hundreds of distinguished speakers, with the aim to create spaces in which the digital community can come together, discuss, question and, of course, celebrate.

Following this year’s editions in Berlin (8-10/ 5/2017) and Dublin (#rpDUB, 7-8/9/2017), re: publica goes to Thessaloniki, highlighting a wide variety of issues that concern both the present and future challenges of our digital society. The speakers of #rpTHE are journalists, scientists, filmmakers, programmers, designers and artists from all over the world, participating in round table discussions. The topics of the event range from media & journalism to gamification, data visualisation and refugee supporters to open data & cities. Some of the themes featured in the Thessaloniki event include the following: “Sharing and Shaping the Future: European Societies in the Digital Age”, “How connected are the digitized cultural artworks with the real ancient culture and history?”, “Τhessaloniki, Greece and Milan, Italy: Unsung Gateways of Migration” and “The Great Wall: Media in Western and Eastern Europe”.

Over 90 submissions have been received from the event’s Call for Participation for both the second edition of re:publica in Dublin and the first one in Thessaloniki. In accordance with this year’s “re:connect EUROPE!” motto, the re:publica event will take a closer look at the different tools that can help us shape our shared future. A basic approach of Thessaloniki's session is to present the opportunities and capabilities of new technologies in all aspects of modern life. The aim is to discuss the vision for a digital Europe, explore the present difficulties and develop a platform for the launching of cross-border partnerships for various ideas and projects. Another re:publica goal is political networking: we discuss, explore and shed light into today's political situation through the digital sphere. In addition, the event will explore fields such as European politics, urban development and sustainability.
‚
More information about the program can be found here: re-publica.com/en/eu17/sessions.

Tickets and general information about re:publica and re:connecting EUROPE available at: re-publica.com.

About re:publica:
re:publica is the most exciting conference about the internet and digital culture in Europe. Since its first edition in 2007 –a blogger get-together that counted 700 visitors– re:publica has grown into a multifaceted society conference with over 9,000 participants visiting the event from around the world. The unique atmosphere is a result of the distinctive mix of activists, scientists, hackers, entrepreneurs, NGOs, journalists, bloggers, and social media and marketing experts. The next re:publica event in Berlin will be held from 2 to 4 May 2018.