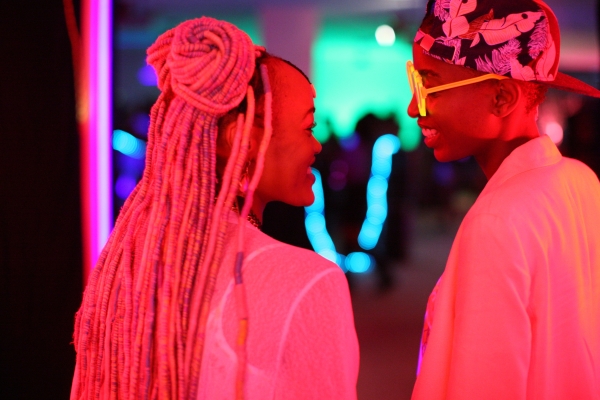 “Rafiki” means friend in Swahili – this is a word commonly used by Kena and Ziki, two young women that want to hide their erotic passion from the conservative Kenyan society, and particularly from their families, who are political rivalries in the local elections. An irresistible pop/feel-good romance about the daze and impulse of the first love – augmented through the magic filters of the colorful, bustling, complex streets of Nairobi – which was banned in its production country, but still fights for a change in the landscape of human rights in East Africa, beyond the boundaries of the cinema hall.
Screening Schedule

Born in Nairobi, Wanuri is part of the new generation of African storytellers. Her stories and films have received international acclaim. Her films were screened in numerous film festivals around the world. To date, Wanuri has written and directed six films, she is the co-founder of Afrobubblegum, a media company that supports, creates and commissions fun and fierce African art, and has also written a children’s book. In 2008, Wanuri completed her awarded first feature film From a Whisper, based on the real life events surrounding the twin bombings of US Embassies in Nairobi and Dar es Salaam in 1998.