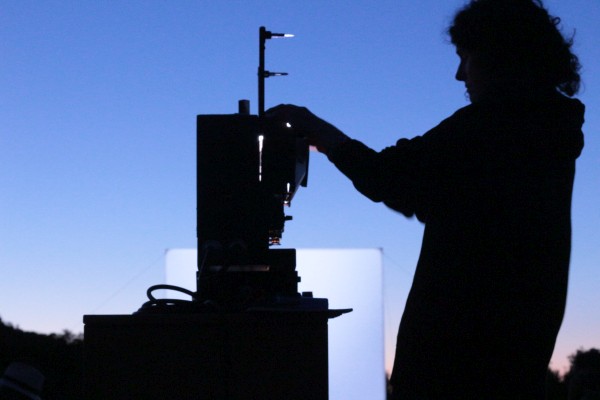 Since 2004, a three-day-long film event has been taking place in Lyssaraia, Arcadia, Greece. The birthplace of Gregory Markopoulos’s father, this remote village in the Peloponnese is the place designated by the late filmmaker as his Temenos, a Greek word originally meaning a sacred piece of land set apart from everyday life use. Here, once every four summers, filmmakers, academics, cinephiles gather for the projection of the cycles of “Eniaios,” Markopoulos’s definitive, 80-hour long magnum opus. Devotion is an insightful and rare visual testimony of the latest edition of this event, which took place in early July 2016. A fascinating pilgrimage, as well as an act of delicate love for the enchanting and fragile work of one of the least known protagonists of avant-garde cinema.
Screening Schedule

Writer, curator, and photographer Georgia Korossi is based in London and Athens. Her research writings on film and cultural studies have been published by Sight & Sound and Little White Lies. She co-ordinated the BFI digital projects 39 Steps to Hitchcock and The Reel History of Britain, and she is part of the BFI’s Digital team. During her postgraduate studies at Goldsmiths, she worked as film programmer and producer with a number of projects including the Athens Ethnographic Film Festival and the Athens Biennale.