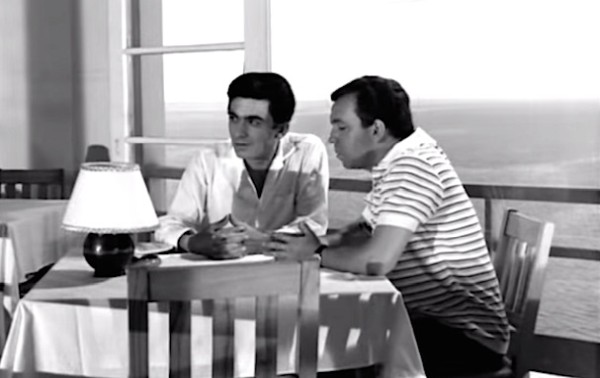 Dimitris Ioannopoulos was one of the founding spirits of Greek cinema. He studied Law in Athens followed by Cinematography in Berlin. On returning to Greece, he worked as a journalist, a playwright and a theatre director. In 1938-1945 he served as director of the Theatre Section of the National Council for Radio (NCR), and from 1948-1960 he was the NCR correspondent to the UN. He was also Chairman of the Greek Dramatists’ Association. During this period, he was also working on the embryonic Greek cinema, writing the screenplay for and directing the first Finos Film movie The Voice of the Heart, the first successful attempt at a talkie in Greece, exhibiting basic professionalism. Waterlily Villa (1945) and Acacia Avenue (1954) are two further Finos Film productions both written and directed by Ioannopoulos. He directed another five films, writing the screenplays for four of them.

1943 The Voice of the Heart
1945 The Villa with Water Lilies
1954 The Road with the Acacias
1957 Fanouris and His Clan
1957 I moira grafei tin istoria
1960 Thieves Rejoice Only Once…
1960 Stratiotes dihos stoli
Following a misunderstanding, a young woman attempts to get a young man she believes to be a thief back on the straight and narrow. Things change when she discovers he’s not a thief after all, but rather one of the most successful lawyers in Athens. A story of young love born on an Aegean island and reaching a happy end in the capital. A romantic comedy based on an earlier play by the director, it won the Leading Actor Award at the 1st Greek Film Week for Dimitris Horn’s landmark performance.
Screening Schedule

Thieves Rejoice Only Once