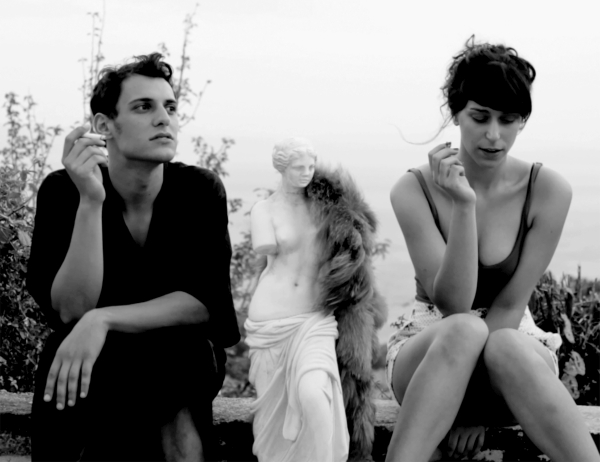 German-Greek director Telémachos Alexiou was born in Halkida, Greece. At 17 he moved to London to study Visual Culture and then to Berlin where he studied Film Theory and started working as a filmmaker and video artist. His works have been shown at the Berlin International Film Festival, the Arsenal Institute for Film and Video Art, Human Resources Los Angeles et. al. He is currently working on his second feature The Voice οf an Angel.

2009 The Logic of the Cat (short)
2010 Dream of Norma (short)
2011 An Interview with an Artist (short)
2012 Venus in the Garden
2014 Simón De La Columna (short)
2014 Queen Antigone
It’s the heat of Grecian summer. After a chance encounter, a female pimp, Monika (Athena Mathiou), and one of her male prostitutes, Nikos (Alexandros Vardaxoglou), invite Alan (Stavros Svigos) to stay with them in a crumbling mansion. In-between theatre castings, erotic photoshoots and card games, love entangles the trio in an unpredictable, impossible situation. Sometimes Nikos’s arms disappear like the statue of Venus. A lush, illusory film, a decadent but bare portrait of an unstable reality, undefined outside of character and tricky within that. Much of the film takes place on a black soundstage, characters posed in mannered positions and configurations, an archly theatrical mirror to the supposed reality of the summer house. Which, if either, is the reality, remains a mystery.
Screening Schedule

Venus in the Garden