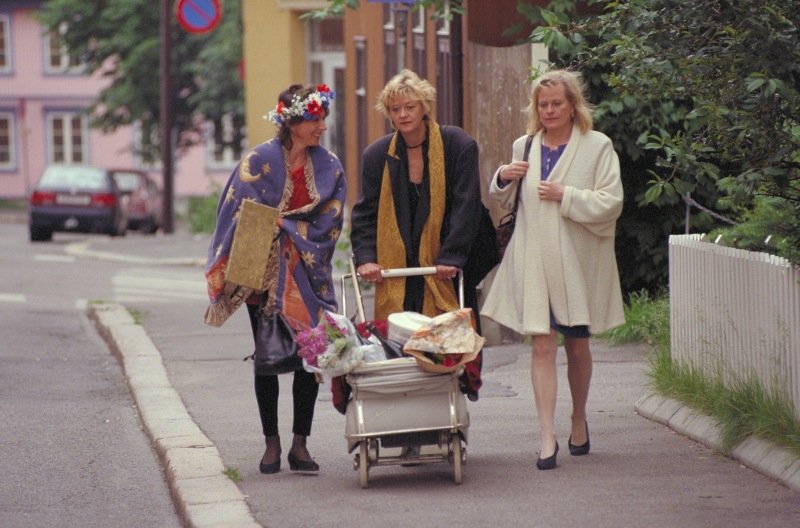 It all began in 1975, the United Nations International Women’s Year. Anja Breien and the actresses Anne Marie Ottersen, Katja Medboe, and Froydis Armand, resolved to make a women’s film, Wives, which questioned the traditional roles of the sexes. Ten years later, the same women came together once again for the film Wives-Ten Years After, proving that 40- year-old women, too, can let their hair down and challenge accepted norms. In this sequel of Wives, the three women and childhood friends have reached the age of 50...

Anja Breien (b. 1940) was educated at the French film school L'Institut des hautes études cinématographiques (IDHEC), graduating in 1964, after first having studied French at the University of Oslo, as well as having had her start in the movie-business working as a script supervisor on Nils R. Müllers film Det Store Varpet in 1961. She made her directorial debut with the short film Growing Up in 1967, based on a medieval legend. The short was later to become part of the portmanteau film Days From A Thousand Years in 1970. Her feature film debut was the criminal drama Rape in 1971, which received raving reviews, and has in recent years been released on DVD as part of the “Norwegian Classics” line. Breien's second film followed in 1975, and has since become one of the most commented and analyzed films in Norwegian cinema history: The cheerful and decidedly feminist comedy Wives became a box-office success, and made editor of International Film Guide, Peter Cowie, refer to Breien as a dogme-director twenty years ahead of time. The film also spurred to popular sequels; Wives – Ten Years After (1985) and Wives III (1995), examining the lives of the characters of the original film ten and twenty years on. Wives – Ten Years After was also awarded the Norwegian National Film Award Amanda for Best Film of 1985. After the critical acclaim and commercial success of the first Wives-film in 1975, Breien was firmly established as one of the leading directors in Norwegian cinema, a position she further cemented in the following years, directing critically hailed films like Games of Love and Loneliness (1977) and Next of Kin (1979), the latter of which was nominated for the Palme d'Or at the 1979 Cannes Film Festival. Her 1981 drama Witch Hunt was selected for the Venice Film Festival, and the thriller Paper Bird (1984) further displayed Breien’s proficiency across genres. In addition to directing numerous feature films of significance, Breien has also established herself as a director of perhaps equally important short and documentary films, through her entire career. In addition to her early short, more recent films such as Solvorn (1997), To See a Boat in Sails (2000), Untitled – Sans tître (2005), Etching (2009), and Yezidi (2009) have all been screened at international festivals.