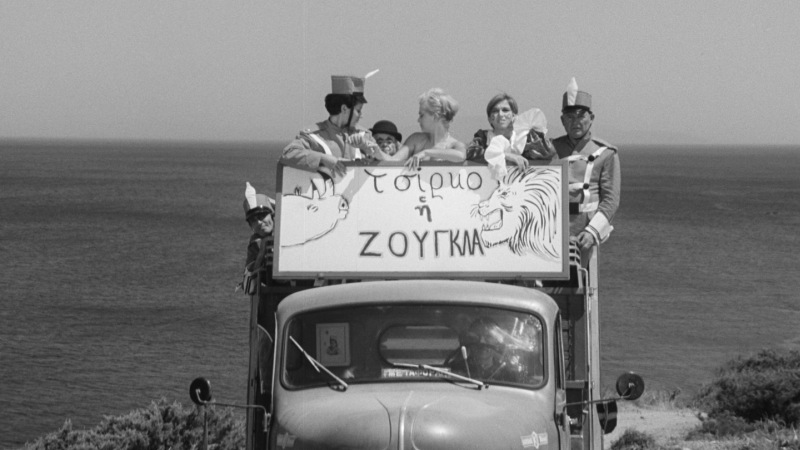 A young boy runs away from the reformatory where he spent the last couple of years, and hides at a young girl’s house. The two of them will form a strong friendship, but, when his parents’ on-tour acting troupe passes by the village, the boy will reunite with his family and they will take him with them. With the songs written by Yannis Poulopoulos enhancing the melodramatic feeling, Stavros Tsiolis directs his debut film, after working on several films as an assistant to Finos. In the tender relationship between two kids, Tsiolis depicts something almost primordial, a pure viewpoint, which, combined with child naivety and open heart, reflects a world that probably doesn’t make sense. Tsiolis himself said that, in order for Finos to give him the film, he requested a demo and that’s when he shot the scene where the kids are marrying their dolls, in an emotional scene that summarizes the whole viewpoint of the film. Finos was mesmerized by the puerility of the scene and was convinced to give him the green light. That's when he started one of the most impressive careers in the history of modern Greek cinema, with an unexpected turn: after two years, and having experimented with different genres, Tsiolis gave up cinema and traveled around Greece, to come back in 1985 with the film Such a Long Absence, starting a period of classical comedies, which became more or less common collective relics for the viewers for the years to come. Ιn their own way, these comedies were nothing more than folklore tales, just like the magic realism melodrama The Young Runaway. All of them served as personal readings of reality through a stylistically tense cinematic viewpoint. Maybe sometimes it is simply vital to escape.

The film will be shown in a digital copy (DCP), with English subtitles and Greek subtitles for the Deaf or Hard-of-Hearing (SDH). The screening of the film is done with the support of Finos Film.

Stavros Tsiolis was born in Tripoli in 1937 and died in Athens in 2019. He studied cinema at the Stavrakos Film School in Athens, while he worked for about a decade as an assistant director participating in over 50 films by important Greek directors. The Young Runaway (1968) was his first feature film for Finos Film. In 1970 he made an international hit with his film Abuse of Power. He abstained from cinema from the year 1971 up until 1985. He came back in 1985 with the film One such Long Absence (1985) to mark his return. Freed from commitments of the 1960s, 1990s was characterized by a new personal style with topics around the Greek countryside. Among his films that have been distinguished in Thessaloniki Greek Film Festival: Invincible Lovers (1988) with best directions and best film award, Love Under the Date-Tree (1990) with best film award, and Please, Ladies, Don’t Cry (1992) with best direction and screenplay award.