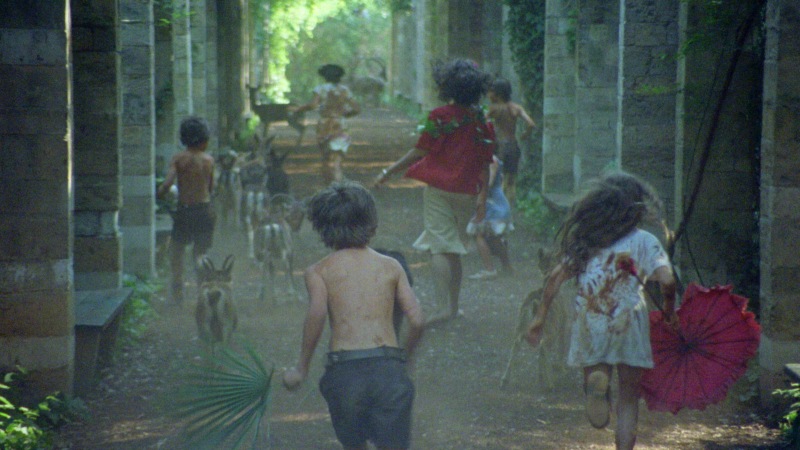 It’s one of those impossibly scorching hot days of early summer, when the heat beats down on humanity so relentlessly that anything can happen. 30-year-old Sophie is married with two children and works at a multinational IT company as a programs analyst. She has just found out that she’s the only female chosen to attend a special educational program in the US because of her square logic. What she doesn’t know is that her memories and her primal instincts affect her subconsciousness, her work and her entire identity in ways she cannot control.
That same afternoon, at the National Gardens, a series of events cause her to fall prey to those dark inner forces, gradually losing all sense of identity and running away, like a hunted animal, while her husband makes a desperate attempt to save her and their daughter. After A Foolish Love, Panousopoulos returns with a film that’s an open dialogue with Euripides’ Bacchae, a retelling of the tragedy through a contemporary point of view, where the new tech-crazed reality openly clashes with deep-rooted pagan fury. Like a rampant bacchanalian goddess, the main character casts social restraints aside, embodying the ancient struggle between the earthbound and the metaphysical, the instinctual and the rational.

The film will be screened in a newly restored digital copy (DCP), created for the purposes of the event Motherland I see you, with English subtitles and Greek subtitles for the Deaf or Hard-of-Hearing (SDH).

He lives and works in Athens. In 1962 he started working as a camera assistant in renowned Greek studio Finos Films and three years later he took over as director of photography in the French-Greek production To bloko [The Block] (1965), directed by Adonis Kyros. He was a leading director of photography during the 1970s and 80s in Greece, working with directors like Theo Angelopoulos, Pantelis Voulgaris, Demos Theos, Nikos Panagiotopoulos, Nikos Nikolaidis Alexis Damianos, Tonia Marketaki, Nikos Perakis, Yorgos Tsemberopoulos etc. He directed his first short film in 1967, which was subsequently censored by the Greek junta. His first feature film, Honeymoon, which he wrote, directed, produced, DoP’d and edited was presented in the Thessaloniki Film Festival and went on to win Best New Director, Best Actor and Best Actress. Τill today he has directed six more feature films. Being a cinematographer, he has been director, producer, scriptwriter, DoP. and editor of almost all his films.