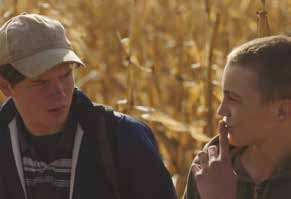 Etienne Kallos is a Greek-South African Director. His early works, documentaries, were screened at the Berlinale. His first short, Doorman, was presented at the 2006 Cannes Film Festival (Cinéfondation section) and at the 2007 Sundance Film Festival. Etienne’s thesis film, Firstborn, won the Golden Lion Award for Best Short Film at the Venice Film Festival in 2009. The Harvesters is his first feature.

2006 No Exit (short)
2006 Doorman (short)
2009 Eersgeborene | Firstborn (short)
2018 Die Stropers | The Harvesters
Free State region in South Africa is an isolated stronghold to the Afrikaans white ethnic minority culture – the culture of the ancestors of the Dutch colonizers. Janno is an introvert teenager who grows up in this so-called “bible belt,” in a conservative farming territory. When his fiercely religious mother brings home Pieter, a hardened street orphan she wants to “save,” she asks Janno to make this stranger into his brother. A modern, ghostly parable about the youth that lives in the shadow of Apartheid, struggling with the obsession with masculinity and the question of patrimonial heritage.
Screening Schedule