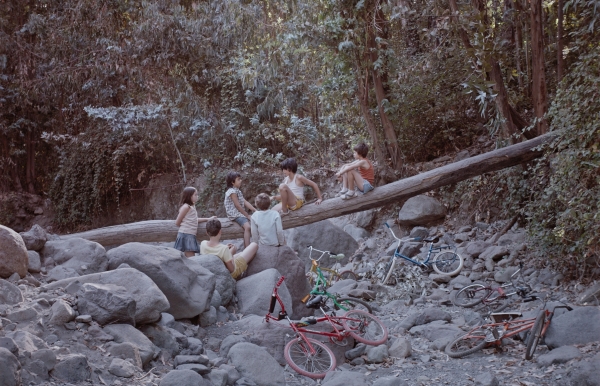 In the early 1990s in Chile, a small group of families builds an autonomous community on the foothills of the Andes, far from the comforts of civilization. In this earthly version of utopia, three teenagers grow up with acceleration, eagerly waiting for the time they won’t be depending on their parents, in a country that is about to turn the page after the end of the Pinochet dictatorship. Αn inmost sensorial wandering through the landscapes of memory, where every wall or physical border has collapsed, becomes a collective portrait of a generation that learned to live with the melancholy of personal and political illusions.
Screening Schedule

Dominga Sotomayor studied Audiovisual Directing at Universidad Católica de Chile, and did a Masters in Directing at ESCAC in Barcelona. She developed her first feature Thursday till Sunday at the Cannes Cinéfondation Residence. The film won the Tiger Award in Rotterdam in 2012 and was screened in more than a hundred festivals (including Thessaloniki). She has worked in videos and photographs for visual art exhibitions. She co-founded Cinestación, a leading production company based in Santiago where she produces auteur filmmaking in Latin-America. She also co-founded CCC, Centro de Cine y Creación, a cultural centre and arthouse cinema scheduled to open in Santiago de Chile in 2019.

Too Late to Die Young