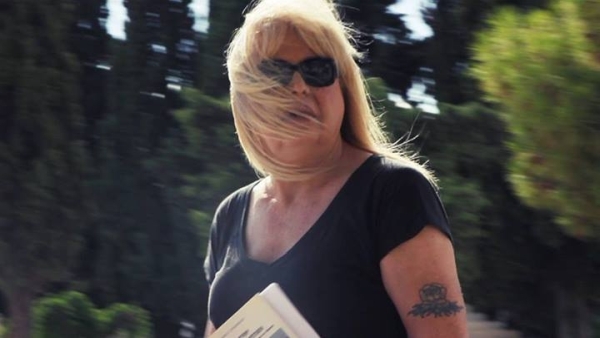 Paola Revenioti (born Pavlos Reveniotis) is a Greek transsexual woman, a leading figure in Greek LGBT+ activism, a poetess and publisher of Kraximo magazine. She held one of the first ever Greek Gay Prides. Paola is also active in photography, while since 2011, she has been filming documentaries together with the “Paola Team Documentaries,” consisting of Vaggelis Tsakas, Alexandros Sinodinos, Elpiniki Voutsa, Pavlina Drakou, George Gkonos, Danai Maragoudaki, Eliza Triantafyllou and Margarita K. Chomatianou. Paola and the Team have already created a series of documentaries mainly focusing on subjects such as immigration, discrimination, controversial historical events and much more.

2013 First Cemetery of Athens: A Walk with Paola (short doc)
2013 The Journey of Aris from Afghanistan to Greece (short doc)
2014 All Three of Them were Fabulous (short doc)
2014 Paola in Tyrnavos - Bourani (short doc)
2015 Kaliarnta (doc)
2015 Women Who Love Women (short doc)
2016 Paola's interview to Dinos Christianopoulos / Strange Where it Finds the Courage to Blossom (doc)
2017 Welcome (doc)
Paola Revenioti and the filmmaking team Paola Team Documentaries present their first feature documentary about “Kaliarda,” the secret language of the homosexual community in Greece, from the 40s until the country’s regime change in the early 70s. Paola became acquainted with Kaliarnta towards the end of its use, in the 80s. The team started out aiming to record the history of Kaliarda, but realized they were recording the history of the homosexual community life in Greece during the 20th century. Themes start emerging, such as love, sexuality, hang-outs, the problems faced by homosexuals at the time and how conditions gradually changed until today. In the documentary, we speak with academics and people from the street, who had a first-hand experience of our subject.
Screening Schedule