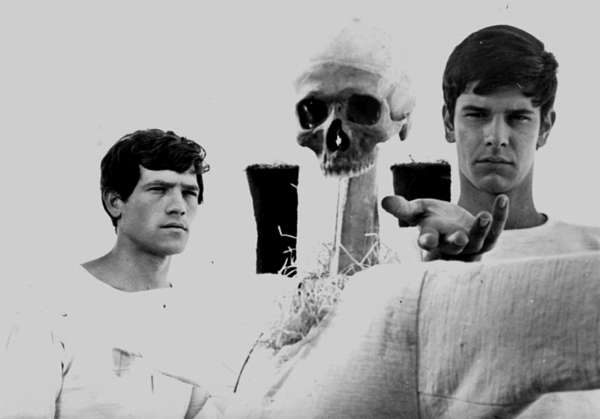 Nikos Koundouros (1926–2017) was born in Agios Nikolaos, Crete and studied Painting and Sculpting at the Athens School of Fine Arts. Due to his political views, he was persecuted and forced in exile, not only after the end of World War II, but also during the colonels’ regime. He made his first feature film, Magic City, in 1953. In 1956, The Ogre of Athens established him as a true representative of the new age of cinema. Since then, his films have received international acclaim and earned him a place in the vanguard of Greek cinema.

1954 The Magical City
1956 The Ogre of Athens
1958 The Outlaws
1960 The River
1963 Young Aphrodites
1967 Vortex or The Face of Medusa
1974 The Songs of Fire (doc)
1978 "1922"
1985 Bordello
1992 Byron, Ballad for a Deamon
1998 The Photographers
2013 One Ship for Palestine
Through the half-open door of his bedroom, Philippos sees his girlfriend in the arms of his younger brother. He says nothing and leaves in silence, without being noticed. A few days later, during a trip to the Greek islands, his younger brother disappears. Everyone suspects Philip. Alexis, who is gay and in love with Philippos, is asking him to confess, otherwise he is decided to report the disappearance to the police. The girl suspects who the killer is, but she doesn’t say a word. Philippos feels the danger, but he will play the game to the very end.
Screening Schedule

Vortex or The Face of Medusa