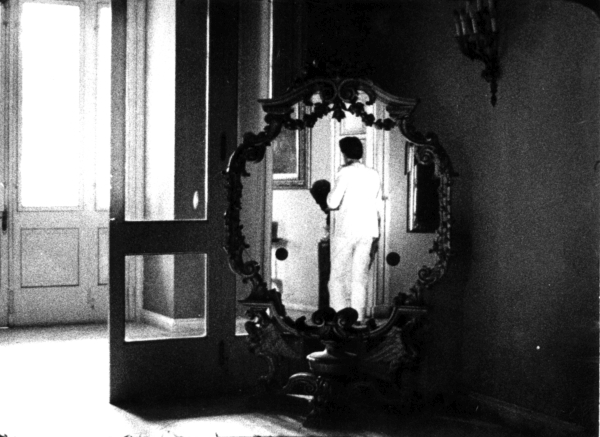 Giorgos Kalogiannis (1953-1999) was born in Corfu, Greece. From 1973 to 1975, he worked at Cinémathèque Française as an assistant director for Henri Langlois. In 1976, he directs and produces the short film Livios i i agalmatodis parousia tou perasmenou epous, which was included in the program of the Thessaloniki Film Festival and was screened at the Cannes Film Festival (1978), among others. In 1977, he collaborates with ERT [Hellenic Broadcasting Corporation] on the TV show "Paraskinion" [English translation: “Backstage”], directing three films: Photomanganza, Bost, and Yannis Tsarouchis. In the late 1970s, he completes his postgraduate studies (DEA) int Paris Nanterre University. In 1980, he settles permanently in Greece, where he also engages in painting. In September 1999, he organizes his one and only painting exhibition in Corfu.

1976 Livios (short)
1988 Parent-Child Relationship: Today's Family (short doc)
1989 Casts and Copies (short doc)
Through the visit of an old aristocratic family in their mansion, which is now turned into a museum, a critique to the past is articulated.
Screening Schedule