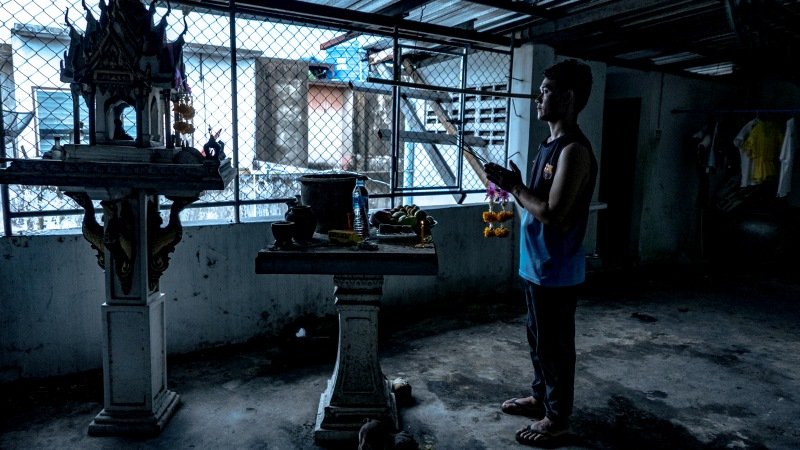 Kang, a middle-aged man suffering from an unbearable neck pain, lives in a spacious house, in a well-to-do neighborhood. He seems fragile and broken, as if his physical ailment mirrors his suppressed desires. Non is a young poverty-stricken Laotian immigrant, trapped in the raucous havoc of Bangkok. Their worlds are about to collide in the crossroad of mutual longing for human contact. A hypnotic immersion into the cavern of loneliness and the stunning monotony of human existence.

Born in Malaysia in 1957, Tsai Ming-Liang premiered his debut feature Rebels of the Neon God at the Berlinale in 1992. His sophomore film Vive L’amour (1994) won the Golden Lion award at the Venice Film Festival, while The River (1996) won the Jury Award at Berlin, thus solidifying his status as a major filmmaker. All of his feature films so far have been selected by the top three film festivals of the world and five of them have won the FIPRESCI award. In 2009, Face became the first film to be included in the collection of the Louvre Museum’s “Le Louvre s’offre aux cinéastes.” In recent years, Tsai has also received attention from the art world, having been invited to participate in various art exhibitions and festivals, and for putting forth such aesthetic ideas as the “Hand-sculpted Cinema” and “The removal of industrial processes from art making.” In 2012, he began his “Slow Walk” series and has since completed eight films, screened at art festivals and galleries around the world. Back in Taiwan, he actively promoted the concept of “Art Museum as Cinema” and “The Author’s Intended Way of Viewing”, introducing new film-watching modes as a way to balance the overly commercialized film market. Tsai is the most sensual, sensitive and sombre filmmaker of this generation. He sees the human body as a mysterious, malleable and vulgar machine, and seeks to strip naked the sensory functions of the human body through his work. His films, often lacking narrative and dialogue and composed of long, slow takes, present life in its truest form, showing us the helplessness of humans, their desire, emptiness and loneliness. His lens, long fixated on Lee Kang-sheng, is in fact, fixated on life itself.