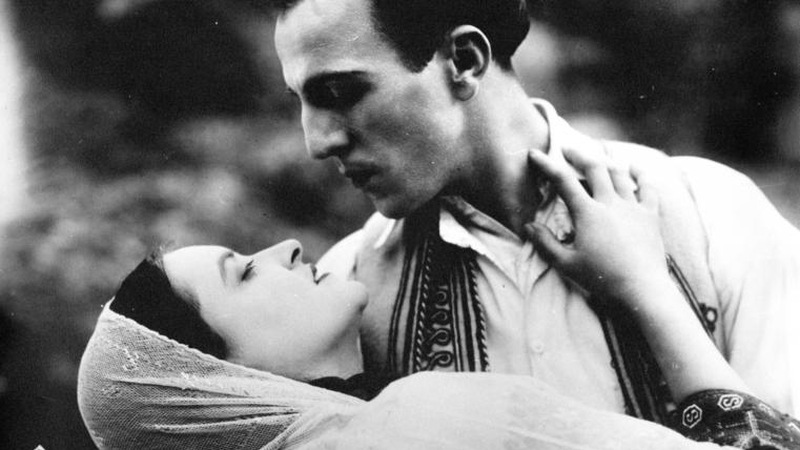 At the bottom of mount Helmos, far away from the city and the remains of the past urban glory, and somewhere in the heart of the Greek countryside, Astero and Thymios exchange vows for eternal love. Thymios’s father believes that Astero is not the right person for his son, threatening to disinherit him if he marries Astero. Destiny and prejudice seem to keep the lovers apart. Will they ever meet again? Loosely based on the novel “Ramona” by Helen Hunt Jackson (which narrates the story of a forbidden love set in the U.S.), this historically important film is set in the Greek countryside, where many of the popular productions of that period were set. The country, from the urban center to the countryside, was steeped into a sociopolitical crisis (in the film, Astero’s uncle is a political prisoner in Athens and his fortune determines the fate of the characters), so the “foustanella” sub-genre becomes popular as the main tool for escape. Gaziadis composes a small pastoral epic tale in three acts, where social classes and erotic passion set the tone of a melodrama with heroes who seem determined to go against their own destiny. Elements with timeless value – just like the shift from “Ramona” to “Foustanella” –  which are fundamental for the narrative and cross borders and seasons. The film, lost for decades, had a successful box office remake in 1959 directed by Dinos Dimopoulos, starring Aliki Vougiouklaki. Until a copy of the film with French intertitles was found in the Cinémathèque Française in 2003. Now the film is also available accompanied by the music composed by Nalyssa Green for the screenings of Motherland, I See You event.

The film will be shown in a restored digital copy (DCP) created in 2003 by the Greek Film Archive in collaboration with the French Film Archive with Greek  intertitles and English subtitles.

Dimitris Gaziadis (1897–1961) was one of the first directors of Greek cinema. He studied at the Academy of Fine Arts in Munich and was the assistant of Georg Pabst, Ernst Lubitz, Alexander Korda, and André Dupont. He returned to Greece in order to film scenes of the Asia Minor campaign (1919–1922). In 1924, alongside his brothers, Kostas and Michalis, they founded film production company called DAG Film. He continued to create until 1955.