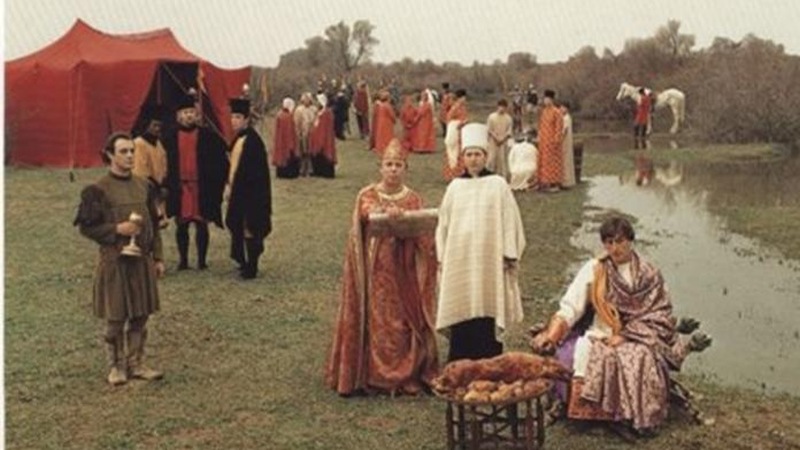 Doxobous is the name of a Byzantine village. The film tells a story that unfolds in medieval Macedonia in the 14th century, when the first civil war broke out in Byzantium. A young man from Doxobus (Xenos) will live through all the winds of war (1321), growing up first in a monastery and then participating in the civil war. The defeat of the emperor and the triumph of the revolutionaries, where Xenos was distinguished for his heroic achievements will bring him as a reward and reward for his bravery in the village itself. Xenos, a new kind of leader, will consolidate his power, changing completely the lives of poor peasants and citizens.

He studied Film in Moscow (1965–1970). From 1970 to 1973, he thoroughly researched twenty-two governmental and private film archives in Europe and the United States, in search of newsreel material referring to Greece between 1911–1971. In 1973, he collaborated with Theo Angelopoulos on the scenario for Angelopoulos’s film The Traveling Players. From 1975 to 1997, he directed over 50 documentaries for the Hellenic Broadcasting Corporation (ERT), including Panorama of the Century’s thirty-three 30-minute episodes narrating the news in Greece and the world from 1895 to 1940, based exclusively on newsreel material; a series of twenty documentaries on the disintegration of the Soviet Union (1989–1990); and a seven-episode documentary, Beauty Will Save the World (1991), which chronicled the parallel journey of the Russian State and the Russian Orthodox Church from the 10th century to our time. In 1981μ Lamprinos filmed a feature-length documentary for the screen entitled Aris Velouchiotis: The Dilemma, about the Resistance during the German occupation. His fiction film Doxobus (1987) referred to the 14th-century Byzantine province by the same name and the civil war of that period. In 1995 he produced and directed Birthday Celebration or a Silent Balkan Story, a documentary dedicated to the centenary of cinema and made up of footage from Balkan silent movies (1895–1930). His films have received awards in Greece and abroad. Lamprinos created the first Greek user-friendly archive of old newsreels (1997–2000), which is housed at the Ministry of Foreign Affairs. From 1993 to 2003, he taught about the Relationship between History and Cinema at various universities in Greece.