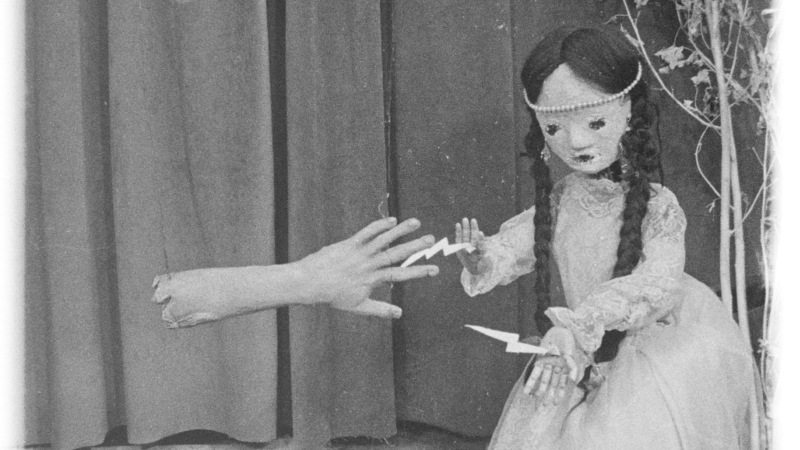 A fictitious account of the world’s first stop-motion animated film. Dated 1901 and excavated in 2021 as Chile drafts a new Constitution, the footage documents a ritual performed by a girl who appears to use human corpses. Emerging in the ritual are Diego Portales and Jaime Guzmán, central figures in the construction of authoritarian and oligarchic Chile. A meticulously crafted myth of the origin of animation, and at the same time a ritual that channels and interprets the energy of the historical moment happening in Chile today, made by two of the most original contemporary artists of the moving image.

Cristóbal León and Joaquín Cociña (both 1980, Chile) have been working together since 2007. In their experimental films, they draw techniques from photography, drawing, sculpture, dance, and performance, to create a new interpretation of religious symbolism and magical rituals – elements that are deeply rooted in the traditional culture of Latin America. The papier mâché figures and innocent-looking drawings strongly contrast with the heavy topics, such as religion, sex, and death, the films deal with. Next to their screening in international film festivals, their work is frequently exhibited in museums and biennial exhibitions in Latin America, but it has also been presented at venues such as the Whitechapel Gallery, KW Berlin, the Venice Biennial 2013, and Art Basel Statements 2012. They are represented by Upstream Gallery (Amsterdam). Their first full-length film La Casa Lobo premiered at the 68th Berlinale in 2018, where it was awarded the Caligari Film Prize.