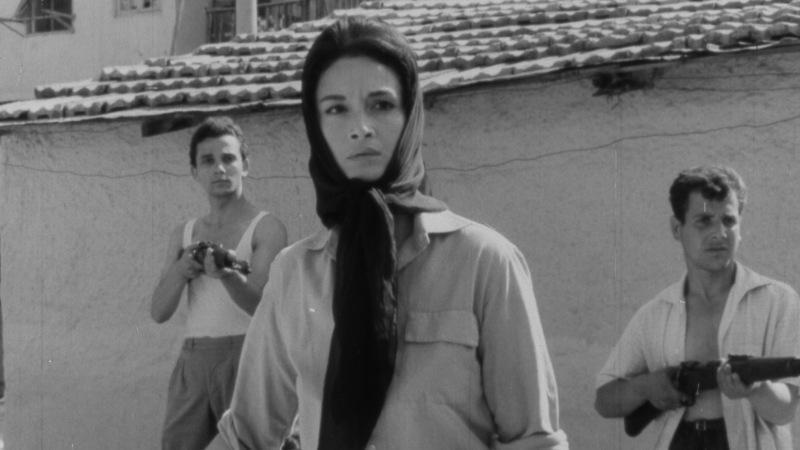 A summer night in 1944 in Kokkinia, Kosmas, a black marketeer, is out with his friends before he is arrested by the German patrol. The Germans push him to turn in people from the Resistance, or they will execute him. The next day, Kosmas wears a black hood and points at the combatants who have been forced to gather at the main square of the village. The film of the hyperrealist filmmaker and writer Adonis Kyrou, recreates the terrifying conditions of the blockade of Kokkinia, when, in the last period of the German occupation, the populous neighborhoods of Athens resisted at any cost. Having as a starting point the event that marked the history of the country, the film “attempts to serve as a collage of the occupied Greece, going beyond the several political differentiations,” according to the filmmaker, or it shows “the objective inability of modern man to stay aloof in seismic events”, like the ones that took place in July of the same year. Guided by truth and accompanied by facts, Kyros, who, self-exiled in Paris, was artistically in conversation with filmmakers like Buñuel and Bretton, created one of the first and essential depictions of the Greek resistance during WWII, in a Brechtian piece of work. It doesn’t come as a surprise that the film sparked many reactions at its premiere at Cannes Semaine de la Critique. The film is considered to be a true cinematic landmark, a relic of the “Lost Spring” of the 1960s.

The film will be shown in a new digital copy (DCP) created for the purposes of the event Motherland, I See You, with English subtitles and Greek subtitles for the Deaf or Hard-of-Hearing (SDH).