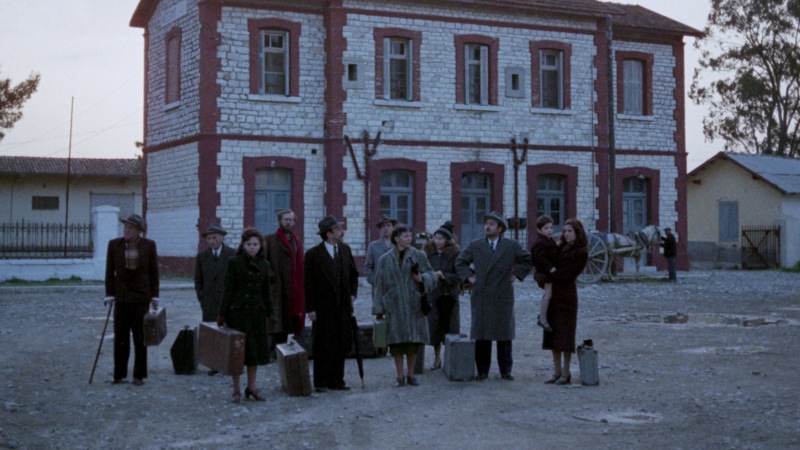 The film follows a group of travelling actors in Greece, between 1939-1952, as they wander through provinces, cities and villages, performing, in increasingly threadbare circumstances, a 19th-century pastoral melodrama, Peressiadis’s Golfo the Shepherdess. The political history of Greece and the private lives of the members of the troupe, who also belong to the same family, become inextricably entwined. The adventures of Orestes, his sister, father, mother and her lover recall the myth of the House of Atreus. The father is executed by the German occupiers after being turned in by his wife’s lover; Orestes, a communist guerilla, assisted by his sister Electra, will kill his mother and her lover on stage, only to be executed himself during Civil-War cleansing operations against the Greek guerillas. The story’s main character is the elder sister (who, following the myth of the Atreides, would be Electra). The film’s sequential structure, complex and complicated, is built around continuous temporal maneuvers and alternating time periods.

The film will be shown in a new digital copy (DCP) created for the purposes of the event Motherland, I See You, with English subtitles and Greek subtitles for the Deaf or Hard-of-Hearing (SDH).

He was born in Athens in 1935. In 1968, he presented his first short film, The Broadcast, at the Thessaloniki Film Festival. Two years later, his first feature film, Reconstruction, won First Prize at Thessaloniki, as well as several other prizes at international festivals around the world, signaling the dawn of Modern Greek cinema. His films were screened at various film festivals and garnered numerous nominations and awards, culminating in the Golden Palm at Cannes, in 1998, for Eternity and a Day. He died on January 24th, 2012, following an accident during the shooting of his film The Other Sea.