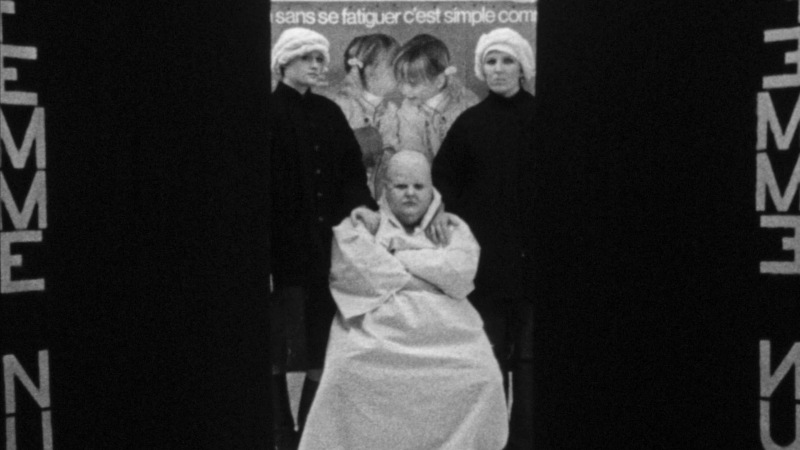 Antouanetta Angelidi uses creatively her knowledge on the history of cinema and connects it with a universal artistic language, in the creation of an alternative and poetic cinema, while keeping her unique personal form and her own inquiries. With a magnificent meta-narrative, the film uses not only the tools of cinematic language, but also music, language, sound, architecture, poetry and most importantly body language, in an experimental exploration of gender, expanded on a study on every kind of contrast in an audiovisual collage, in between art and reality. Angelidi states that she was initially preoccupied with “the expansion of the limits of cinematic representation and the inclusion of the creator's subjectivity” and indeed, through the masterful use of space, each sequence, each frame is a representation of contrasts, resulting in the synthesis and inversion of codes, a true cinematic material and anti-material. “The film explores the representation of the female body in the history of modern art: gender as a construction and not as destiny,” comments the filmmaker. “The inversion of the code, as well as the clash of different codes, becomes a method of writing and, therefore, of reading the film. A sequence of indirect references and games comment, in an unconventional way, on aesthetic theories and specific artworks. The inversion of image and sound works in favor of the narrative, re-writing the female body,” One of the pivotal experimental films of Greek cinema, which marked the debut of a filmmaker who never stops challenging the viewer or exploring the limits of cinematic representation through remarkably made films.

The film will be screened in a newly restored digital copy (DCP), created for the purposes of the event Motherland, I See You, with English subtitles and Greek subtitles for the Deaf or Hard-of-Hearing (SDH).

Film director and visual artist. Studied Architecture in Athens; Film Directing and Editing at IDHEC in Paris; and Film Theory with Christian Metz. Her films were screened in international film festivals and contemporary art museums. Uses art history and her dreams as raw material, while dream-mechanism and the uncanny constitute her main creative strategies. Has taught in the Film School at the Aristotle University of Thessaloniki and at the Universities of Patras, Thessaly and the Aegean. Retrospective tribute to her work in the 46th International Thessaloniki Film Festival.