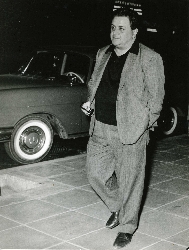 Manos Hadjidakis is a musical genius,who forged a brilliant creative career while confronting with scepticism and questioning deeply entrenched viewpoints. With his songs and his music he focused on the dream dimension of mankind, pointing the way towards freedom and non-conformism. 18 April 1961. Oscar for Best Song goes to the Greek composer Manos Hadjidakis for the title song of the film Never on Sunday. Manos is not present at the awards ceremony and for the first time in its history the Oscar remains undelivered... “Never on Sunday” will beleaguer its musical father formany years to come with its fame. He will continue to project his visions in their most extreme form and to reveal the deeper meaning of art in every way.

He studied in Athens and graduated with Honors from England’s National Film School, of which he is a lifetime member. He has directed and produced documentary films, including two feature documentaries for the Greek parliament, fiction andmusic series for TV, as well as cultural programs. He has won awards at the Thessaloniki, Bordeaux and Lorquin Film Festivals. He has worked with the German TV channel ZDF and recently with the English Production Company Mosaic Films on the European series Eureka Eutopia for BBC, ARTE and the international market.

Manos Hadjidakis - Reflection in the Mirror