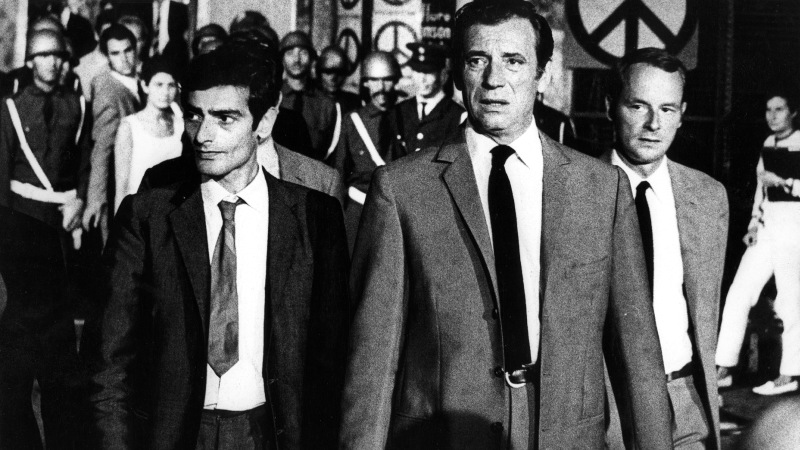 "Any resemblance to real events, to people alive or dead, is intentional!" The sincere rage that runs through Gavras’s classic political thriller is evident in every frame, from the credits to the glances, from the demonstrations to the interrogations, and in every possible intermediate point. Based on the novel of the same name by Vassilis Vassilikos, about the assassination of EDA MP Grigoris Lambrakis by parastatals in the ’60s – a turbulent decade for Greece, the Z (not read ”Zeta” but “Zi” which means “alive” in Greek) starts with the attack on a political figure of the opposition (Yves Montand) and the immediate attempt of concealment, following the subsequent research by an investigator (Jean-Louis Trintignant) determined to bring the true facts to light. But what can be the price of truth in such a corrupt and politically unstable environment? In a screenplay he co-wrote with the later Spanish Minister of Culture Jorge Sembrun, Costa-Gavras weaves a thriller that raises the pulse not by using exaggerations and cheap twists, but by locating and intentionally commenting political terror, through interrogations and glances that never hide the truth. Through an uninterrupted montage and the impetuous compositions of Mikis Theodorakis, Gavras follows faces, processes, and truths hidden in the shadows, completing a bold, vital portrait of that period’s social impasse, that captivated the world audience. It was the second non-English language film in history, to be nominated for an Oscar in the Best Film category.

The film is in French and will be screened in a restored digital copy (DCP), created in 2014 by KG Productions with the support of CNC, with English and Greek subtitles.

Costa Gavras was born in Arcadia, Greece (1933). He studied Literature at Sorbonne and cinema at the French national film school IDHEC. He work as director assistant for Jean Giono and René Clair before directing his first film The Sleeping Car Murders (1965). He has been established with a variety of political thrillers that revealed the violent face of dictatorial regimes winning the Best Foreign Language Film's Oscar for Z (1969), the Oscar for Screenplay & the Golden Glove for Missing (1982) and Cannes Film Festival for Special Section (1975).