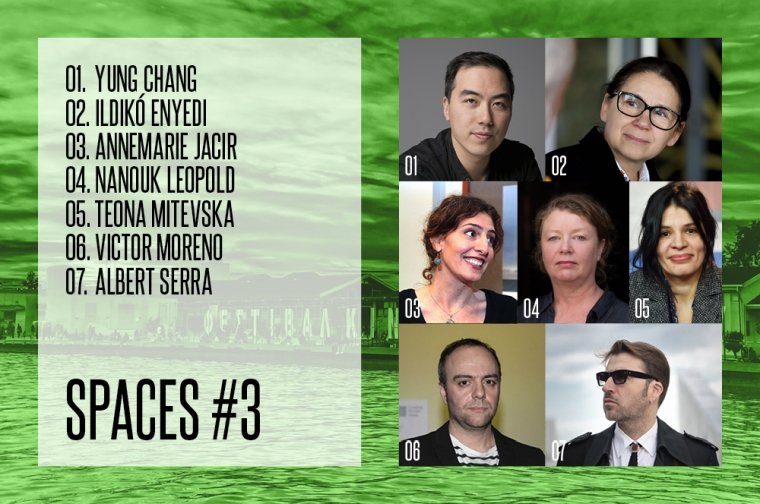 The Thessaloniki International Film Festival presents the third part of the project “Spaces” with the participation of seven renowned directors from all over the world. In “Spaces #3” the filmmakers share with us the short films that they have prepared at home, presenting an image of the quarantine which tears down all borders. The project is presented on the Festival’s YouTube channel, with the support of the Ministry of Culture and Sports.

We are in this apart by Yung Chang

The Conversations of Donkey and Rabbit by Ildikó Enyedi

Don't lose heart - a letter to Yorgos by Nanouk Leopold

The Infinite Confinement by Victor Moreno

My influences by Albert Serra

You can watch Spaces #3 here:

Find out more about the directors participating in “Spaces #3”:

The Canadian-Chinese director Yung Chang has travelled with his documentaries to the biggest film festivals around the world, such as Toronto, Sundance, San Francisco and Los Angeles film festivals. His feature length debut, Up the Yangtze got rave reviews and dozens of awards worldwide. His work includes China Heavyweight, The Fruit Hunters and the recent This is Not a Movie for renowned war correspondent, Robert Fisk.

Hungarian director Ildikó Enyedi, one of the most original female voices of contemporary European cinema, has had a fascinating journey from the avant-garde art scene of the '70s to top festivals around the world, with films such as On Body and Soul (Golden Bear at Berlin IFF), My Twentieth Century, Magic Hunter, Simon the Magician. Her cinema is dream-like, surrealist, captivating.

Palestinian filmmaker Annemarie Jacir has written, directed and produced over sixteen films. Her short film Like Twenty Impossibles (2003) was the first Arab short film in history to be an official selection of the Cannes Film Festival. The critically acclaimed Salt of this Sea (2008), was the first feature film directed by a Palestinian woman. When I Saw You (screened at the 54th Thessaloniki Film Festival) won, among other awards, Best Asian Film at the 63rd Berlin International Film Festival.

One of the most distinguished female voices in Dutch art-house cinema, with an impressive festival run through six films (Cobain, It’s all so quiet, Brownian Movement, Wolfsbergen, Guernsey, Iles flottantes) Nanouk Leopold visited the 59th Thessaloniki International Film Festival on the occasion of a tribute to her (deeply humane) work, introducing a handful of unique, introvert, brave, fascinating characters.

Teona Strugar Mitevska is the most prominent director of North Macedonia today. Her filmography includes five feature films. Her latest film, God Exists, Her Name is Petrunya, winner of the 2019 LUX Film Prize and was screened in the 60th Thessaloniki International Film Festival.

Spanish director and editor, Victor Moreno, is a new force in documentary filmmaking. His short films have been screened in festivals and won awards in over 20 countries. His three feature length documentaries, Holidays (2010), The Building (2014) and The Hidden City (2018) have also been distinguished in festivals such as San Sebastian, BAFICI, DocLisboa, IDFA. The latest – a visually mesmerizing exploration of underground Madrid – was also screened in the 21st Thessaloniki Documentary Festival.

The awarded films by Catalan filmmaker Albert Serra – the “enfant terrible” of the “Old Continent” – draw their inspiration from European myths, legendary historical figures, and emblematic literature characters, providing their own definition of “slow cinema.” This fearless and brilliant director challenges the audience to think beyond stereotypes and invites us to the most surprising cinematic experiences.

In “Spaces” beloved and renowned directors from Greece and all over the world have created their own short film, inspired by the book “Species of Spaces” by Georges Perec and the days of the quarantine. “Spaces #1” with short films by 8 beloved Greek directors is available on our YouTube channel (https://www.youtube.com/watch?v=hLyV-YuEjU8). You can watch “Spaces #2” with projects by seven international directors here: https://youtu.be/FAEfh3U7EZg