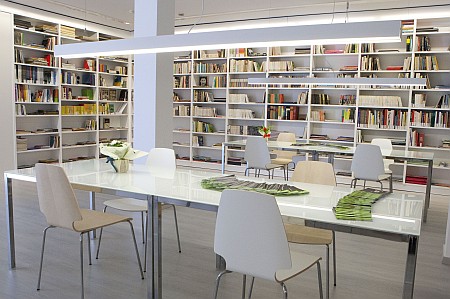 The collection comprises a variety of publications (on the History of Cinema, Dictionaries, Annual Film Catalogues, Director's Monographs, Actors' Biographies, publications on Film Aesthetics and Theory, on National Cinemas, Script-Writing etc.) as well as Greek and foreign film journals and periodicals some of which since their first publication (such as Cahiers du Cinéma, Sight and Sound, Contemporary Cinema etc.).

Part of the collection exists in digital form, a fact that guarantees the preservation and safe maintenance of archival material while at the same time makes the collection easily accessible by the wide public. Moreover the digital collection contributes to the best possible organization and operation of the Library according to modern standards and ensures the interconnection with other libraries in Greece and abroad. The digitization of the rest of the collection is under way and funded by the European Commission.

We hope that very soon we will be able to welcome you again in our Museum! In the meantime, you can explore the Film Library's collection online, at myfestival.gr

A Donation by Stavros Niarchos Foundation made possible the creation of the space hosting the collection.