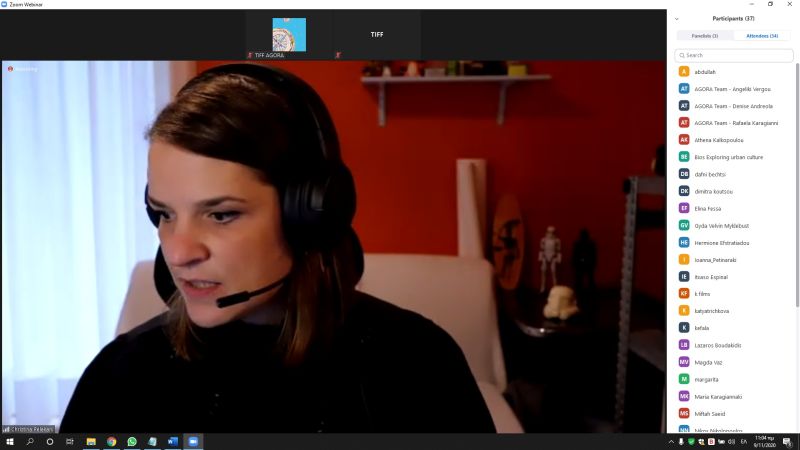 Agora Talks are held online with the support of EKOME (National Centre of Audiovisual Media and Communication) in order to give to cinema professionals and to projects participating in Agora the necessary tools for a better understanding in questions of contemporary coproduction and film marketing from the very start. Christina Pelekani, specialist in marketing issues, introduced us in film marketing, presenting ways to achieve film promotion.

Prior to the discussion set, a video was screened presenting in detail all EKOME activities aiming at boosting Greek film production.

“Possibly you think that marketing is someone else’s job, perhaps of the distributors, nevertheless that was the case about twenty years ago. In the today digitally developed world, the faster you start off, the better” Mrs. Pelekani noted. “This will help you stand out to the audience, find sponsors and funding, and make more people, apart from your family and friends, watch your film. Marketing will turn your job easier, and when you present your project, no one will forget you. Your audience is your first and last priority. Be brief. Turn your content more personal and difficult to forget”, she added.

Afterwards, she referred to the basic marketing components. “We will explore the three “C”: Consumer. You have got to understand what your audience wants to watch and try to attract it. Convenience. How to offer your audience easy ways to purchase your content. Communication. Create a dialogue for the supposed audience according to its needs and to its way of life”, she noted.

“As far as the consumer is concerned, you should be able to name, in one word, the audience you are addressed to, and the way of finding it. In addition, you should answer to questions such as: Do you know of any similar film in the film market? Which festival did that film participated in? Who was the sales agent of that film? You have to use your strongest elements and all your film’s challenges. You should know what category the audience would rank your film in. Is it a blockbuster, a film with excellent casting, a thriller, an independent American film, a European artistic film production, a very promising film that would possibly win an Oscar, or a documentary? Posters are very important. Learn from your mistakes, as well as from others’ achievements”, she added.

Ms Pelekani asked the participants to track films similar to their own and read the reviews: “Check if these films have been awarded, if they have participated in any festival, what was the audience review for the film – social media would help a lot. How was the distribution carried out, what were the platforms the film was presented in? And last but not least, pay attention to the marketing. Social Media and websites like IMDB will help”.

Christina Pelekani brought up several films. “Let’s take the film Ammonite for example and examine the whole strategy. It is a costume drama where two women fall in love with each other. In this case we already know our audience, we also know that the film participated in several film festivals and had famous actors at its cast. Thus, we would seek for similar films such as Portrait of a Lady on Fire, Carol and Call me by your name. We can search for their posters, their genre. We are searching in the box office, that may defer from one country to another, we are searching for the distributors in Europe and in America, which festivals were their premieres screened, if they have been awarded, the audience as well as the journalists’ review. All this information will surely give us an idea of the box office results and of the budget needed for the film production”.

Next, she talked about the poster creation. “We will definitely search for a graphic designer to read our script. However, it is up to you to point out your film’s strong elements. You surely know all these elements that will help your film stand out. Once you are aware of the strong elements of your movie and of all challenges that your movie will find in its path, prepare a list with the film pros and cons. The film may be genuine, or else it may be based on a book that has already been read by the audience. The director may have been already awarded or can be dubbed as a very promising talent. Let’s talk about the cons. A director who isn’t famous, the film language that may be too “violent” for the screen. What is important? You have to turn the cons into pros. Let’s talk about a director who isn’t famous. For sure this would be an obstacle. Therefore, we make some noise around him/her. Audience plays an important role, too. You have to know your audience for your film even before you write your script. Not everyone is going to be your audience. Unless, of course, you have a very strong budget and a well-known studio promoting your film”.

She went on to add that age, gender, income, education, profession are several filters for specifying the audience. “Let’s say for example. Male, born in 1946, married three times, of high income and with five kids. He could be Donald Trump or Sylvester Stalone. As you can see demographic elements are very unclear. We will never use the same tools to approach these two men, but also these two men would never watch the same films. Therefore, we should know our audience habits and interests. How do they talk, what do they wear, what are they afraid of, how do they behave to other people, what do they read, do they have social sensitivities? A survey, conducted by the European Commission on ten countries, on a sample of 5,000 people, resulted in a percentage of 16% of European film consumers preferring blockbusters and famous European films, a 20% preferring independent film productions and a 16% preferring TV and video games rather than cinema movies”.

Later on, she talked about distribution, referring to cinemas, DVD, VOD, Pay and Free TV. “We have many alternatives, event screening is one of them, that is screenings taking place in special rooms. For instance, the screening of the film Life of Pi, where the audience is watching the film, seated in boats, inside a pool in France. There are platforms for self-distribution, though filmmakers must create their own sales strategy, a task not easy to do. There are also three ways on Video on Demand. The Transactional Video on Demand, where companies earn money by selling or renting videos to customers – i-tunes, google play. The most popular one is the SVOD, Subscription Video on Demand. The audience can pay in a certain price to watch films – Netflix, Disney +, Hulu. There is also Avod, Advertising Based Video on Demand that is for free and companies are getting money through adverts – for instance YouTube and IMDB. Distributors must adjust in these new conditions for the promotion of their films.”

According to Ms. Pelekani “you need marketing because people must always remember you. Set these questions: What’ s your audience? Think as a fan and offer your audience the same things you would like to watch in a film. What makes the difference in your film? What is the budget for marketing? In B2B approach people want to have as many information as possible in a short time. How would you stimulate the audience interest? With tools such as posters, a pitching deck with summaries, director’s notes financial plans and in general with as many tools as possible to promote your project. Then we have the script, the trailer, a website, Social Media. In B2B approach, think again as a fan. Create the content you would wish to watch. Your tools will be once again a poster, a trailer, blogs, sites, Social Media etc.”

Subsequently, she mentioned the significance of the poster, stating that it takes 1.8 seconds for the audience to decide whether it will watch he movie by taking a glimpse at the poster. “It must be impressive in its content. We have for example posters for action movies are black and white and burst in flames. For romantic movies, one can see a red dress somewhere in the poster. In independent film productions posters, the color that dominates is yellow. You don’t have to use all the clichés in case you wish to create something different, as for example the Moonlight film poster, a truly amazing poster. Be sure that the poster is simple, hard to forget. You don’t want to lie to your audience or promote anything controversial. Your audience is all around and is quite busy. Competition is strong. You have to think, why pay attention at my movie?”

She noted that social media are ideal tools for a movie, emphasizing the everyday updates. Finally: “Websites are necessary to your film promotion, influencers too. Make them tell a story. There are two rules in digital marketing. If you have more time than money, try to advertise yourself. Make many videos promoting what you sell and behind the scenes very interesting to the audience. Use narration – after all, you are story tellers - in marketing too, in order to build a contact with your audience”.