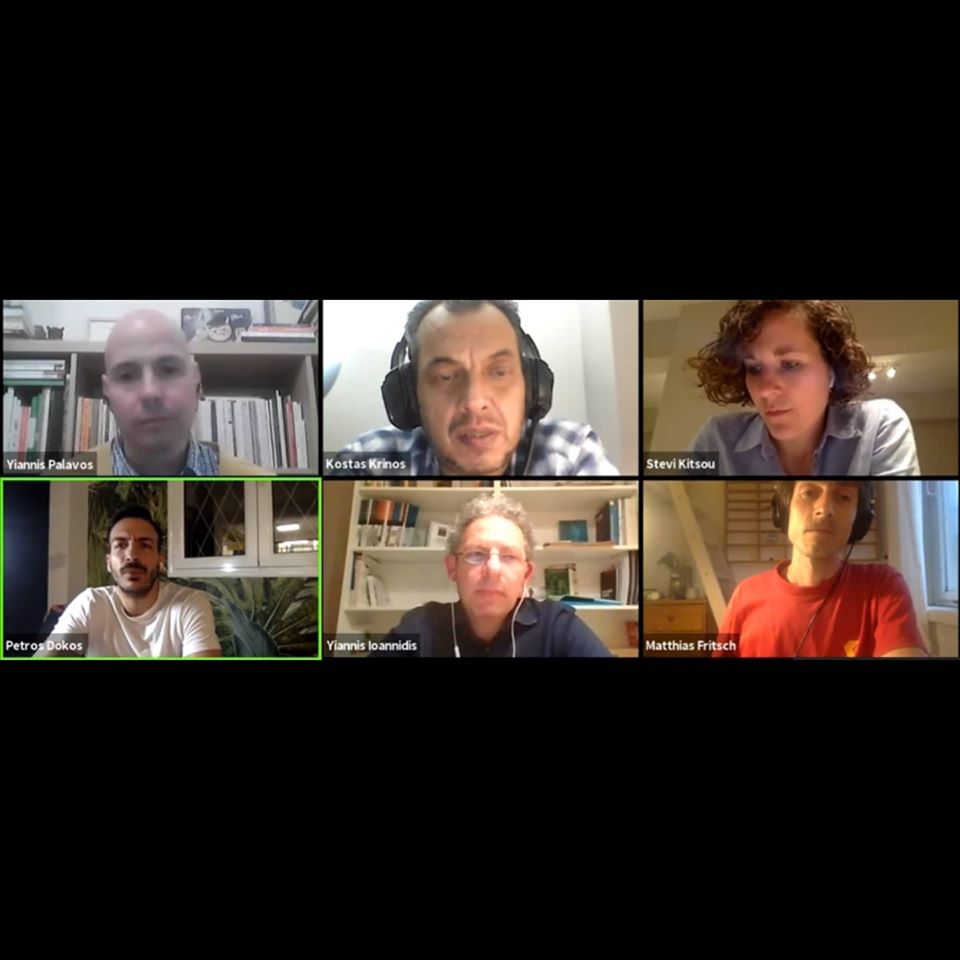 On Wednesday, May 27th, the third and final open discussion within the framework of the 22nd Thessaloniki Documentary Festival —this time focusing on memes; was held with great success. The discussion, which was broadcast live from the Festival’s YouTube channel, was attended by Matthias Fritsch, director of Story of Technoviking which was screened in the relevant tribute of this year’s event, Yiannis Ioannidis, President of the Hellenic League for Human Rights and Stevi Kitsou, Attorney at Law specialising in human rights and member of the BOD of the Hellenic League for Human Rights; as well as Petros Dokos and Costas Krinos, creators of the renowned and popular Facebook page “The Real Ancient Memes”. At first, the moderator of the discussion, Yiannis Palavos, spoke, who after welcoming all the speakers introduced the audience, to the topic of discussion: “Many believe, that memes are nothing more than a pleasant ‘note’ of laughter in our daily lives. In reality, however, this is a complex issue with many and very-important parameters, amongst which, are the protection of human rights, in the modern digital environment. Our guests who arrive from different fields of specialisation, will charter a wholistic picture of this complicated phenomenon of our age”, he concluded — now leaving room for the festival’s guests to have their say.

The first to take a stand, was the German director Matthias Fritsch, who first referred to the incident that served, as occasion for his documentary: Story of Technoviking. “Twenty years ago, in 2000, I was filming scenes from Fuckparade of Berlin, an annual public parade, and I decided to isolate a four-minute clip in the form of a “highlight”, in which appears a half-naked man. The specific ‘snap-shot’, took the form of an anonymous, art-project, titled Is It True, or Not?, and was hosted in various art venues. A few years later, in 2006, when YouTube was created, I uploaded the video which became viral the following year. “It’s no exaggeration to say that it was one of the first viral video memes in history”, he said characteristically. He then noted, that he had been trying to get in touch with the man, appearing in the video, for two years to no avail. “Even when I was in Asia, I was talking to people who knew who I was, without having met before, because they had seen the video. So, I was sure that Technoviking must have seen it —and that he would get in touch with me at some point. The fact that I started earning some money from the video through commercials, maybe played a role in his decision to finally get in touch with me through his lawyer, by filing a lawsuit against me, for infringement on his right of personality —a misdemeanor I must admit, I succumbed to from the moment I filmed him without his permission. Of course, there is also the other side of the coin, which proclaims that the freedom of artistic expression must be protected by law. However, I must clarify that at the time of creating the video, I sincerely believed that I was not committing any legal offense; as many people had assured me that there was no violation of the right to personality, in the case of a mass public event. Apparently, they were wrong, as I was about to find out in a very unpleasant way”, concluded Matthias Fritsch.

Should we, then, redefine our legal arsenal in the digital age, where the flow of all kind of data is non-negotiable and uninterrupted? The first answer was given by the President of the National League of Human Rights, Yiannis Ioannidis, who stated that since the (re)establishment of the Hellenic League for Human Rights (in 1953) a seismic shift in the landscape has taken place, resulting in that the protection of certain rights is still being perceived in obsolete terms, that do not take into account, the radical changes in the landscape, with the advent of the internet; social media etc. “It is impossible to establish a single and effective regulatory framework that covers the full range of internet and social media. We are dealing with a global phenomenon that cannot be regulated locally. For example, the decision of a German court does not guarantee the protection of the same right in India. Similarly, a court, may for example, have ordered the withdrawal of personal data from a server in the United States, but is in no position to provide the slightest protection in the event that such data, has been transferred to other countries. Of course, I could answer you with a romantic disposition, supporting the creation of a system for managing these issues on a global scale. If we take into account, the fact that we have not yet, been able to reach an agreement on even more important and obvious issues —such an idea, begins to seem rather unrealistic. Regardless, however, such an endeavor would pose many serious risks. The specific issue is extremely complex and there are no clear solutions. In my opinion, in any such case, the parties involved should exhaust the margins of finding a consensual solution, before resorting to court. Courts are not always able to effectively resolve, all such disputes that arise”, he concluded.

Shifting the discussion, towards the cultural dimension of the phenomenon of memes, Yiannis Palavos, ceded his word, to the two creators of the ever-popular Facebook page, The Real Ancient Memes, which has more than 400,000 Facebook followers to its name. Petros Dokos spoke at first, emphasising that memes are the cultural reflection of what society is experiencing at a given time. “Memes reflect the social reality that concern all of us. For example, from the moment the Covid-19 pandemic broke out and quarantine was imposed, we recorded all new behaviours circumstances, that arose from this unprecedented condition of confinement —and tried to portray these changes in a humorous way, by offering a humorous note, amidst stress and pressure. If any of our memes fell into the hands of aliens in a thousand years, I think they would give the impression that the inhabitants of this planet, were having a rather great time and were enjoying themselves, without being burdened by any worries. We strive to joke with everything —as an antidote to both pessimism and vanity”, he stated, with Costas Krinos adding: “We try to discover the funny side in everything that is taking place in society and life. Because everything, even the ugliest of scenarios, hides something funny and play-full inside it”.

Then, Matthias Fritsch, on the occasion of an exhibition he had once presented in Germany which included videos that parodied the original Technoviking video, referred to the artistic value of memes: “Memes capture our impressions and the way in which we interpret the major events, as we grow older. In Art; after all, everything contains a degree of imitation. Personally speaking, I don't believe in artistic parthenogenesis and absolute authenticity. Each art form draws elements from something that has preceded it. As the saying goes (with which I completely agree): “we are all dwarfs standing on the shoulders of giants”. Honestly, I can’t even comprehend how humanity will be in 1,000 years from now, but I am, absolutely certain that whatever we create will undergo mutations, transformations and modifications by future generations. Historians of Art define what Art is —but always at a later stage, and by referring to the past. In our age, anything that acquires the status of viral can be used as artistic raw material”, he said.

Apart from the laughter and cheerfulness, they evoke, is there maybe a darker side to memes —especially when used as a means of promoting populism and hate speech; as in the case of Pepe le Frog adopted by the American Alt-right? The response came from Ms. Stevi Kitsou: “We must first make it clear that the situation in the United States is completely different from that of the EU. In the United States, the so-called “free marketplace of ideas” —where the boundaries concerning the utterance of political discourse are extremely elastic and any imposition that is restrictive; must have very strong bases of justification. In contrast, in the EU and in European culture, in general, as a result of the unforgettable horror experienced in the Second World War, one observes a regulatory approach, with regard to the content of political rhetoric. Nonetheless, the EU avoids imposing a set of binding obligations to private entities and organisations, preferring to enforce non-binding and soft law rules. For example, in the case of companies operating in social media, it is up to them to draw up a framework of rules, which is then adopted by the legislator. The problem with this approach is that these companies play, both the role of regulator and implementor of these rules, thus establishing in this way, an idiosyncratic and essentially flawed system of “privatisation of censorship”. We must, however, keep in mind that there is an urgent need to develop our legal arsenal, in the fight against hate speech in the public sphere”, she claimed.

Do memes, at the end of the day, simply reflect social reality or do they co-create it? “In our opinion, they reflect it. If we wanted to summarise our activity in a couple of words, I would say that we record and archive, the new morals and behaviours, appearing in society”, Costas Krinos stated. In response, Matthias Fritsch, claimed that they work in both ways, an opinion with which Stevi Kitsou agreed. “Sometimes they change the way in which we react in our lives. For example, a football player may celebrate a goal he scored, with a dance routine, inspired by memes”, the German filmmaker said. Finally, Yiannis Ioannidis, focusing on the legal dimensions of the issue, said: “From my point of view, the law continues to regulate people’s behaviour. I understand, in what sense, one can claim, that memes have become autonomous —acquiring their own independent “life — it is my opinion however, that we have not yet reached that point”, he clarified by closing the open discussion.