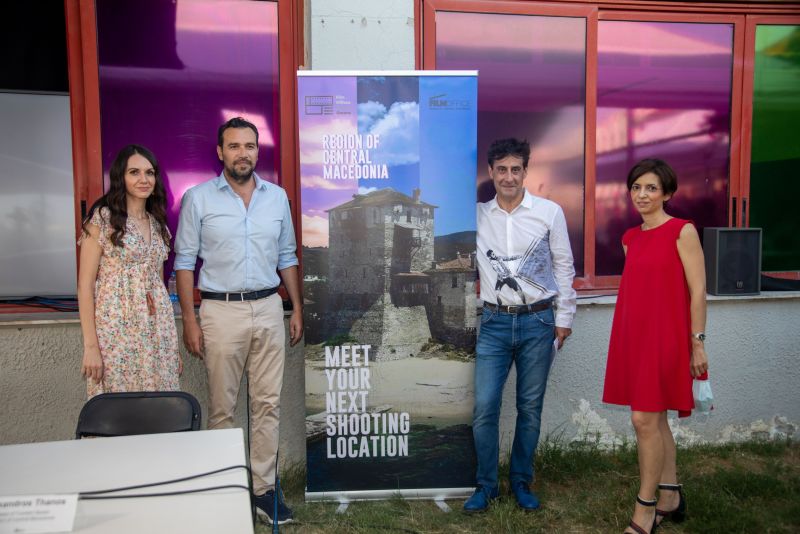 Within the framework of the Agora Talks of the 23rd Thessaloniki Documentary Festival, the Film Office of Central Macedonia hosted the event “Meet the Industry: Open Call” on Tuesday June 29th, at the Pier A of Thessaloniki’s Port. Orestis Andreadakis, the Festival’s artistic director, who thanked all attendees and stressed out the importance of this initiative, preluded the event. “For a very long time our relationship with the Region of Central Macedonia has been characterized by close ties, impeccable cooperation and creative collaboration”, he commented, before giving the floor to the main speakers.

A video message by Apostolos Tzitzikostas, Regional Governor of Central Macedonia, gave the event’s kick-off: “Welcome to Central Macedonia. The best region to live in, the best place to film your projects. Central Macedonia offers a boundless variety of locations, from tropical beaches to snowy mountains. Here you can explore a four-season filming destination, with a unique combination of nature, urban and cultural settings, where you can film practically everything. Central Macedonia is an endless film set, with easy access to all the necessary resources to make your production successful. Plus, a regional Film Office with a wide range of facilitation and support services, which can help you bring your project to life. Meet your next shooting location in Central Macedonia, the best place to start your story”, mentioned Mr. Tzitzikostas in his welcome speech.

Alexandros Thanos, head of the Tourism Sector in the Region of Central Macedonia, took the floor and added: “It is with great delight that we unveil the Film Office, in the context of the Agora of the 23rd Thessaloniki Documentary Festival, an institution set up to support the audiovisual productions carried out in our region and pave a solid ground for the networking between cinema producers and professionals. Therefore, we address an open call to all professionals of Central Macedonia to submit their business or professional presentation and register to our Industry Guide, in order to materialize the networking of our region’s professionals and place Central Macedonia into the limelight of the audiovisual field. I am at your disposal at any time, for anything you may need. I thank you all and wish you good luck”.

Lina Milonaki, head of the Film Office, picked up the baton thanking the Festival and, in particular, the artistic director Orestis Andreadakis, the general director Elise Jalladeau, as well as the head of Agora Yianna Sarri, for including this open call to the parallel events of TDF’s Agora. “It is with great pleasure that we announce here today the first official open call for our industry guide, addressed to individuals, companies and institutions based in Central Macedonia. We invite every film and television professional, as well as every company or institution, public or private, which deals with supporting services to audiovisual productions – such as hotels, catering, equipment rental, transportation, training etc – to register to the Film Office Central Macedonia’s Industry Guide”, she announced.

Subsequently, Lina Milonaki made mention to the services offered by the Film Office. “Our Film Office informs film professionals and potential investors on the competitive national incentives for audiovisual productions, such as the 40% cash rebate program & the 30% tax relief scheme, both administered by EKOME. We intend to provide professionals with a wide range of support services for the projects filmed in our region (such as guidance with licensing permits, advice to location scouting, assistance to find local crew and equipment etc). Our goal is to gradually minimize bureaucracy and connect domestic and foreign audiovisual projects to our experienced local professionals and businesses. We are determined to create synergies and to cooperate closely with national and regional institutions in the audiovisual sector. We live in a region that offers limitless choices regarding locations, as Central Macedonia is an outstanding combination of nature, urban and cultural landscapes, which provides easy access to multiple places in a single day, being less than 60 minutes away from the major cities of the region and very close to the capital, Thessaloniki”, she explained.

Lina Milonaki affirmed the Film Office’s commitment to promote Central Macedonia’s film heritage through an online directory of audiovisual projects of various genres (films, documentaries, TV series, commercials etc), which were or are being filmed in the region. This project will formulate the cinema identity of Central Macedonia, providing valuable assistance to cultural research and development in the region.

At the coda of her presentation, Lina Milonaki focused on the educational pillar. “We truly hope that this gathering will inaugurate a regular co-operation between our Film Office and the Thessaloniki International Film Festival, one of the most acclaimed film festivals in Southeastern Europe. To this goal, Regional Governor Apostolos Tzitzikostas has recently signed two very important MOUs with the Film School of the Aristotle University of Thessaloniki and the Department of Balkan, Slavic and Oriental Studies of the University of Macedonia. As we speak, a one-year photographic project of large scale is taking place throughout Central Macedonia. We have undertaken the task of running a four-season location scouting in all regional units, which will lead to a photo shooting of the exceptional locations of Central Macedonia that will be integrated in our location library. We expect it to be ready by the beginning of 2022”, she concluded.

Dionysia Arvanitou, production support advisor and project coordinator of the Film Office, took the floor and gave the audience a brief overview of the key components of the industry guide. “Our industry guide will include contacts and information on a wide variety of goods and services related to the film and TV sector, among which we encounter: studios; post-production; 3D, VFX and animation; equipment; accommodations; transportation; casting; government support; financial services etc. A large database of all these useful information will be available at our website www.filmofficecentralmacedonia.gr, which is currently under construction.

Dionysia Arvanitou proceeded with enumerating the four sections of the guide:

“The goal of the Industry Guide is to enable producers and potential clients to locate local film, television, and digital media industry professionals and support services companies, providing technical production support systems such as sound, lighting, digital art, animation, sets and studios, broadcasting and distribution channels etc. The database will be constantly updated by the members of the Film Office. We know that your time is money – and expert support can make the difference for your film’s artistic and financial success. Whether it’s finding the perfect urban location, getting permits to film a captivating streetscape, or even renting a fire truck, we have the contacts, the means and the way to make your project a success”, she rounded off.

The event is available at the Festival’s channel on YouTube, in the following link: https://www.youtube.com/watch?v=GiyDCEtnfy4