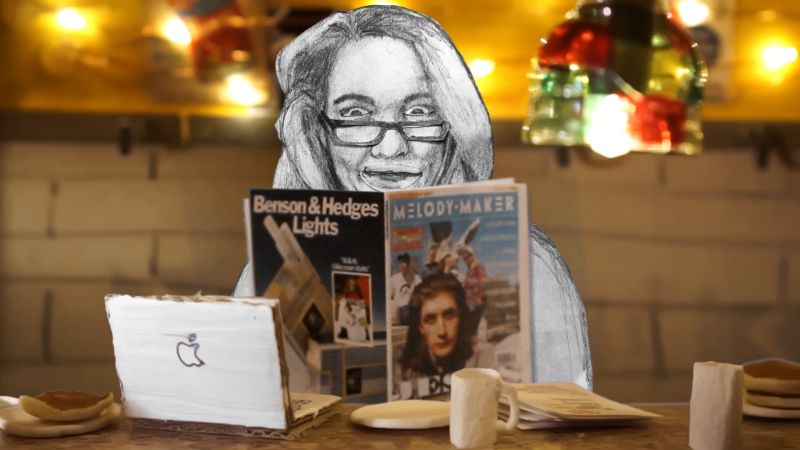 The 23rd Thessaloniki Documentary Festival introduces us to an incredible duo of directors: American brothers Lewie and Noah Kloster experiment with animation in a unique way. Sundance and New York Film Festival favorites, the brothers Kloster are inspired by pop culture, as well as by the people they meet in their daily lives. Their films are fun and innovative short animated documentaries.

Lewie and Noah Kloster will be in Thessaloniki for the screening of their short films on July 3 and 4, at the roof of the M2 building of the Thessaloniki Megaron Mousikis (at 21:30 EEST). They sent a video they made for the Thessaloniki Documentary Festival, presenting their work:

Born and raised in the frozen north of the midwestern United States, old Hollywood films became their primary form of education. Their mother would often help them play hooky from school in order to watch an upcoming film on Turner Classic Movies. Robert Osbourne and Ben Mankowitz became their teachers. Their favorite filmmakers were Stanley Donen, Karl Freund, Howard Hawks, and they loved films like Night of the Hunter, The Cabinet of Dr. Kaligari, and Peewee’s Big Adventure.

With a minimum budget, animation was the only way they were able to match the size, scale, and scope of their favorite imposing filmmakers. Retreating to how animation felt before the digital age, cardboard, construction paper, cotton balls, and magic markers fill their studio to its brim. Since moving to New York City in 2013, everyday people have become their subjects. The city has plenty to offer. Accompanied by their dual perspectives, they are constantly digging for contemporary stories that fit within their frenzied tactile animated worlds.

Their latest film Stranger than Rotterdam, with Sara Driver will have its world premiere at the Thessaloniki Documentary Festival, while Slinging Hash, with Laurie Lindeen, Stick ’Em Up, with Adam Lucas, Le Tour de Pants, with Ali Selim, Shots in the Dark, with David Godlis will have their international premiere.

Stranger than Rotterdam, with Sara Driver

In 1982, the completion of Jim Jarmusch’s sophomore film, Stranger Than Paradise hinged on producer Sara Driver’s willingness to smuggle one of the world’s rarest and most controversial films across the Atlantic Ocean, the documentary Cocksucker Blues by photographer and documentary filmmaker Robert Frank.

Shots in The Dark, with David Godlis

Between 1976 and 1980, young Manhattan photographer David Godlis documented the nightly goings-on at the Bowery’s legendary CBGB, “the undisputed birthplace of punk rock,” with a vividly distinctive style of night photography. Lewie and Noah Kloster bring his photos to life with electrifying immediacy, bolstered by black-and-white watercolor animation, a rollicking soundtrack, and voiceover narration by Godlis himself.

When Alexi Grewal won gold in the 1984 Olympics, it wasn't because he was wearing spandex. However, after the photo finish, bike shops across the USA were flooded with new faces frantic to buy the miracle material shorts. Filmmaker Ali Selim was one of the only few keen enough to understand why Grewal actually won.

Stick ’Em Up, with Adam Lucas

When artist/street artist, Adam Lucas, decided to combine the names Banksy and Tom Hanks into one “HANKSY,” lightning struck. The pun-loving street artist ran with his new self-given name until one fateful day: when he met his all-time hero, Tom Hanks, backstage on Broadway.

What does it mean to be an artist? For singer/songwriter Laurie Lindeen, it means playing a gig and then making eggs. Art life may not be as glamorous as many think, but isn't that the thrill of it? Maybe Laurie can help you decide in this animated documentary about her early years of brief rock and roll success.

As the price of cigarettes becomes astronomical in New York City, Academy Award nominated filmmaker, Christine Choy, goes the extra mile to secure her favorite brand. Bouncing from one airport to another, her duty-free cigarettes get lost in the shuffle, forcing an attempt at smuggling.