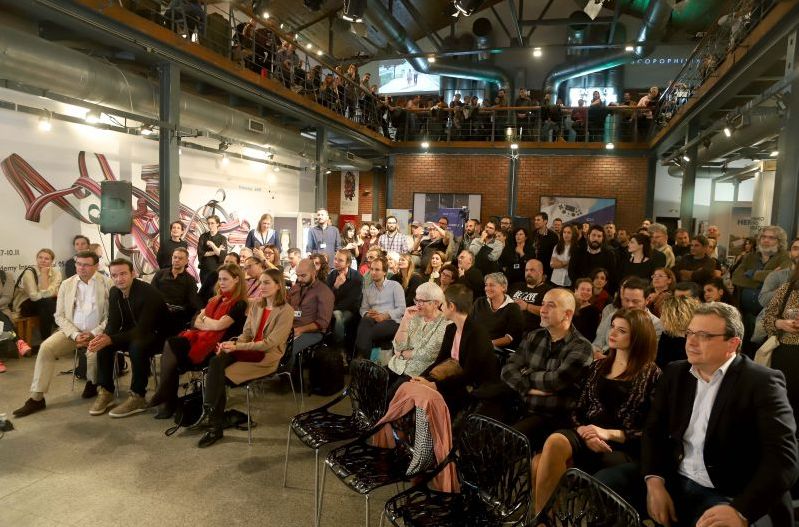 Agora, the TIFF’s industry section, announced its awards on Friday, November 9, 2018 in Warehouse C, as part of the 59th Thessaloniki International Film Festival.

TIFF’s artistic director Orestis Andreadakis wished all participants the chance to make their dreams come true and passed the torch to TIFF’s ambassador in this year’s event Greek songwriter Foivos Delivorias, who presented the awards, in the presence of Yianna Sarri, Head of the Agora. Delivorias initially referred to various films that made it to the theatres in the last years thanks to TIFF Agora’s support, such as Dora Masklavanou’s Polyxeni  (Greece’s nomination for the foreign language film Oscar category), Suntan by Argyris Papadimitropoulos, Park by Sofia Exarchou, who was also a jury member of this year’s Works in Progress section, as well as foreign productions such as Mustang by Deniz Gamze Ergüven (a Lux prize winner) and Secret Ingredient by Gjorce Stavreski (FYROM’s nomination for the foreign language film Oscar category), and many more. Delivorias also noted: “All these days I met and got in touch with very interesting people. I wish everyone good luck. I hope all Agora projects proceed and make it to the theatres”.

The 59th Thessaloniki IFF Agora awards are the following:

This year’s Crossroads Co-Production Forum jury consists of Ada Solomon – Producer, Hi Film Productions (Romania), Pascal Diot – Head of the Venice Production Bridge, Venice FF (Italy), Alexis Hofmann – Sales Agent, BAC Films (France), Annamaria Lodato – International Relations, ARTE (France) and Julie Savary – Coordination, ARTE (France). The jury noted: “First of all, we would like to thank Marie-Pierre Macia, Artistic Director, and the team of Crossroads for the quality of their work and of the selection of the projects.  Many of them aroused passionate discussions among us and we strived to be as fair as possible and respect our respective choices, as democratically as possible.  Regardless of our choices we wish you all to carry out these different adventures.  Given the quality of many projects and the debates they generated, we decided to issue a special mention to one of them”.

The jury of the 14th Crossroads Co-production Forum grants:

The jury reasoning: “We granted this award to a film with a certain visual ambition carried by a director who seems to us to embody what a director is:  a storyteller but also a technician”.

The producer of the winning project will also be granted a free accreditation for the Producers Network session of Cannes Film Festival 2019.

The jury reasoning: “We selected an ambitious film in its very cinematic form, both modern and referenced, contemporary, universal, mixing the drama with a certain form of humor”.

The jury reasoning: “It is a film that successfully mixes both elements of genre film and social drama”.

The jury reasoning: “We decided to grant the award to a young filmmaker preparing his debut in cinema. We were impressed by his rich experience in various professional fields. He develops a story around war and family secrets linked with his origins and personal life”.

VΙ. For the eighth year in a row the French consulting firm Initiative Film, represented by Isabelle Fauvel, will offer its services to a project. The selected project is: MAYSOON, Direction: Nancy Biniadaki, Production: Christopher Zitterbart – Watchmen Productions, Germany

VΙII. The new award Thessaloniki EAVE Marketing Workshop Scholarship offered a scholarship to the producer Müge Özen - Solis Film from Turkey to participate in the 2019 Workshop.

The jury reasoning: “The film convinced us by its unusual combination of contemporary history and the radical exploration of the visual language”.

The jury reasoning: “This film surprised us by its talent, passion and humanity and its effort to change our perception of Time and Space, creating a unique and visionary style”.

ΧI. The MuSou award  providing composition and production of an original film score, music supervision and licensing of commercial music for use in the film, as well as audio post production services, was granted to the film: OROSLAN, Direction: Matjaž Ivanišin, Production: Miha Černec – Staragara, Slovenia-Czech Republic

The jury reasoning: “The film captured us by its intense storytelling and innovative approach to the dialectic between fiction and documentary”.