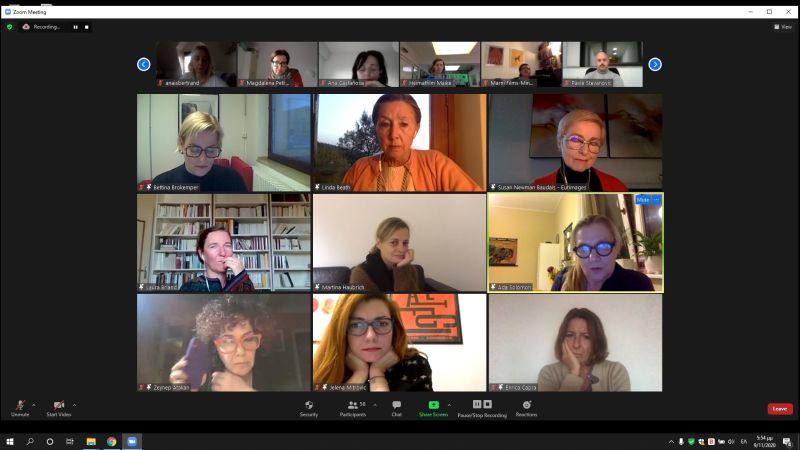 Agora Talks: Online discussion about the current status of co-productions in Europe hosted by EWA

On Monday 9th November, within the framework of the Agora events of the 61st Thessaloniki International Film Festival, an online discussion on the current status of co-productions in Europe, as formed after the pandemic outburst, was held. The EWA (European Women Audiovisual Network) hosted this meeting. Eight cinematography producers from seven different countries, as well as Susan Newman, representing Eurimages and the European Audiovisual Observatory, participated in the meeting. The discussion was held with the EKOME support.

Prior to the opening of the discussion, a spot was screened presenting in detail EKOME (National Centre of Audiovisual Media and Communication) activities, for the boost of Greek film producers, relevant to financing, digitalisation and education.

Initially, Elise Jalladeau, General Director of the film festival, spoke up and thanked the Festival partners, EKOME and EWA. She also welcomed the “famous”, “busy” and inspiring women participating in this meeting. Next, Alessia Sognaloni, Executive Director of EWA, took the floor, and thanked Yianna Sarri and Angeliki Vergou from the Agora for this successful partnership despite the difficult conditions we live in. Hereupon, she handed over the baton to Linda Beith, facilitator of the discussion, who spotlighted the additional difficulties erased by the COVID-19 pandemic in the producers’ job.

“I have been informed lately about the cost for keeping a crew of a film safe, it is very high and is driving budgets up, between 6 and 15% depending on the budget and the amount of interaction”, Linda Beith, reported. “What is the number of co-productions that have been delayed or changed and how the increased costs are being handled?” These were the two questions set by Linda Beith to Susan Newman, who shared her observations and experiences with the participants of this panel.

“Initially I have to state that we hadn’t seen any drop of the average of 200 projects that are coming to Eurimages. What is possible is a change in the filmmakers’ budgets for financing through Eurimages. There are more projects with lower budgets. We do see changes on bigger projects that were already supports and we were about to go into production at the time of the first lockdown. We can see a big increase, 6-9 % in cost coming from a country where the shooting is taking place. What is difficult for the coproduction is if the country where the shooting took place is not the main leading country of the co-production. Some European countries have put into place funding programs with COVID related costs, in order to boost production, but this is helpful only in countries where the shootings are taking place. You can shoot only where you receive the funding. This is starting to create to create tensions within co-production structures because there are certain times where a minority country in co-production sees its part squeezed. The basic structure of the co-production is unbalanced and hard to maintain”, Susan Newman reported.

Consequently, Susan Newman stated that a possible budget increase of a production due to the pandemic has to do first with producers and not Eurimages. Eurimages deals with parameters as the compliance of every co-production to the legal structure. Though, the issue of Covid-19 insurance has already been brought before the competent authorities of the EU? Susan Newman, as member European Audiovisual Observatory, was asked to answer. “Financial aid that will be granted through the new form of MEDIA Program is supposed to embed a form of insurance. The truth is that this specific issue has been initiated by producers’ association in every country. Eurimages provide producers national associations with guidelines and tips as for the way of approaching the European Commission. From our point of you these movements are necessary because we are confronting a structural problem affecting the co-producers’ status in the whole Europe” Susan Newman reported.

Afterwards, German producer Bettina Brokemper spoke up, underlining that the production cost increase may be higher, in case of a production already set off. “For every film production shootings that have already started before last March and it stopped because of the quarantine, I would estimate that the total increase of the budget would possibly reach 30%. As for the Covid-19 insurance cover, granted by the German government, can be granted to productions with shootings in Germany. International co-productions are not included”. Then, Laura Briand, French producer, took the baton and quoted that in France a generous pack of support measurements has been initiated by the government to help cinematography industry in general terms. Although, it has not been approved yet. Martina Haubrich confirmed that strict criteria for the funding in her country decrease the number of producers who are eligible for funding. “It is necessary for the production to be financed by state funds. In case production funding comes from other sources, it is very difficult receive any funding even if it is addressed to regional bodies. As stated earlier, shootings must take place in Germany fact that lessens the possibilities for an international co-production”, she quoted.

Enrica Capra, Italian film producer stated that Italian government in order to help film productions in the Covid-19 pandemic days, it has voted for a significant tax credit in every film production that was under way when quarantine measures were imposed. Zeynep Atakan, from Turkey, stated that there were several governments support measures, although of low budget. “Time has stopped for three months, from March until May. In June we saw the first TV productions. In addition to that, the continuous Turkish lira devaluation leads to the creation of an increasing feeling of insecurity. Personally, I know about at least ten film productions that the shootings would take place in 2020 and they were postponed and rescheduled for 2021”, Zeynep stated.

Ada Solomon, Rumanian film producer, described the terrible situation in her country. “We are not taking any government funding for film production or any insurance cover. Now, things are worse more than ever before because there has been a year that the cash rebate program has been blocked due to political games behind the curtains. No film production that has been released last year has benefited from the cash rebate scheme. The only good news in these difficult times is that we have founded our own association, after twenty years of efforts, named “Rumanian Film Productions’ Alliance”. We have a common voice before all competent authorities”, Ada stated.

Jelena Mitrović, from Serbia, stated that film production industry in Serbia is still alive. “Although we had a total lockdown for three months, film production survived. The cash rebate is operating, Belgrade hosts American TV series shootings. I assure you that there is no support or boost measures due to the pandemic. For the moment, every film production follows its own rules as for the carrying out of covid-19 tests. No one can tell what is going to happen in near future, for cases in Serbia are rapidly increasing”, Jelena stated.

Martichka Bozhilova, film producer from Bulgaria was the last speaker of the first round of discussions. She commented that the situation in her country is similar to the situation in Rumania. We have never received any special boost because of covid-19 pandemic situation. There are no plans for providing tax incentives. There were lots of film shootings in summer, not only national but also international productions, as the number of corona virus cases was not significant. I participated in a film production that has already finished shooting. It is a co-production with Italy and this helped a lot. Because of the pandemic, the film budget saw an increase of 10%. Hopefully, Italian film producers had the opportunity to take advantage of tax benefits, as Enrica has already mentioned. Thus, we transferred a part of our post-production activities in Italy. Of course, this resulted to the change of co-production rates. Now co-production rates are 50-50 with Italy. It goes without saying, that due to the pandemic, many film productions have been cancelled or postponed. In fact, the Bulgaria Cinema Centre has recently stated that there is a reserve of 6 million euros from film productions never finished. The Bulgaria Cinema Centre is called to refund this amount of money to the state. It is not allowed to refund film production”, Marticka said.

Laura Briand, French producer, took the floor and pointed out that nowadays producers are forced to focus on TV movies. Pandemic has been a major blow for movie theatres. It has been said that audience doesn’t intent to go back to movie theatres for long. The movie theatre audience consists of mostly elder people, who have become more familiar with new technologies and streaming platforms. International co-productions are definitely still in my plans. Right now, I believe that it wouldn’t be wise for a film production to focus only on cinema. I truly believe that the pandemic speeded up an unpleasant process that had already started out”. On the occasion of the above stated, Susan Newman analyzed the way closed movie theatres in many European countries have affected Eurimages. “One amongst other prerequisites set by Eurimages is the release of the movie in movie theatres. Apparently, this is not the case, in current conditions. Many of the films we are participating in have been screened to the audience on Video on Demand (VoD), as an alternative. Of course, this solution should be accepted by the authorities of every country”, Susan Newman stated.

Ada Solomon from Romania took the baton, talking not only about her future plans, but also describing how she managed to complete two projects in 2020. We produced two fiction feature films, both international co-productions among four countries. We did the best in order to minimize all possible risks. In case someone gets sick, we are the only responsible. We reduced to a minimum the number of individuals that had to travel, as well as the production cost. In fact, we made an effort to cover all extra Covid-related expenses. Extra cost has to do with much more than tests and disinfections. You are forced to search for more spacious rooms, for more vehicles, for more time etc. Radu Jude’s new film has been a typical example of creative solutions to the above-mentioned problems. This film will be released, under normal circumstances, in 2021. The second wave of the pandemic was almost there and we decided speed up with our shootings. We kept cost to a minimum, for we couldn’t search for other funding sources, as Eurimages. Radu Jude was very cooperative and inventive. We got used to the current conditions. We also tried to reflect the spirit of the age in the movie. For example, a scene with a parents’ meeting in a class is transferred in the courtyard. The best thing, though, was that the entire cast was wearing a mask throughout the movie. Every actor had a different mask as part of his “costume”. We embodied the setbacks triggered by the pandemic in a creative way and at the same time we ensured the security of everyone involved”, Ada Solomon stated.

Hereupon, Enrica Carpa, explained that the cost, under the current circumstances, increases due to several factors. “I would like to point out that the budget increase doesn’t’ result only from the compliance with health and safety measures, but also from the re-launching of the project. If you are involved in a co-production these days, you have to be fully aware of the rules and regulations of every country participating in the project, restrictions that may differ a lot. In many co-productions we may see power change amongst the countries participating in this project”. Linda Beith, the moderator of this conversation, in her closing remarks, tried to be optimistic by referring to the possibility of an effective vaccine released soon. Alessia Sognaloni thanked all participant ladies, as well as the 61st Thessaloniki Film Festival Agora for this interesting discussion.