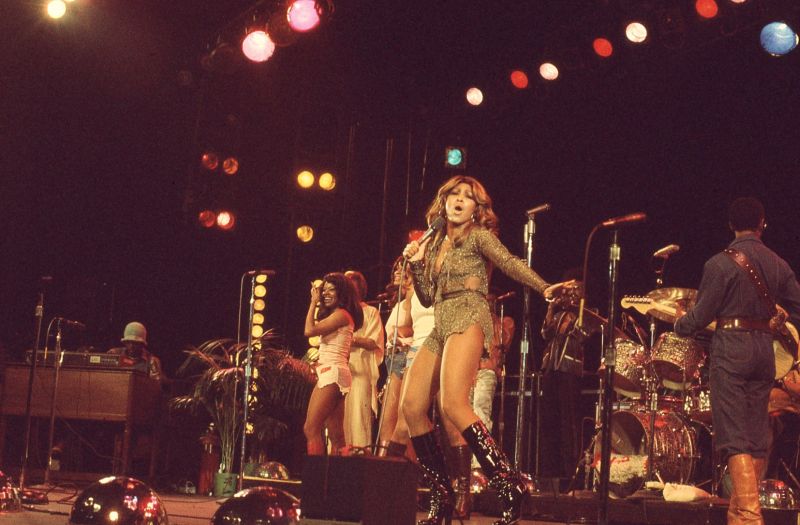 We welcome you to the 23rd Thessaloniki Documentary Festival

This year’s summer and hybrid edition presents 151 exciting documentaries from all over the world, a new podcast section, two enthralling tributes and the developmental actions of the Agora. The 23rd Thessaloniki Documentary Festival is implementing all officially indicated safety measures to limit coronavirus transmission and is held with the support of National Public Health Organization in Greece (EODY).

The 23rd Thessaloniki Documentary Festival kicks off on Thursday, June 24 with a fascinating music documentary for a myth: Tina is the ultimate celebration of Tina Turner, a global superstar and an intimate portrait of a woman who overcame extreme adversity to define her career, her identity and her legacy on her own terms. Until Sunday, July 4, the Festival will take place in open-air theaters in Thessaloniki and online for viewers in Greece, through the Festival’s platform online.filmfestival.gr.

For the first Festival taking place in physical spaces after the pandemic, the Greek Minister of Culture and Sports, the Regional Governor of Central Macedonia, the Mayor of Thessaloniki and the Deputy Minister for Contemporary Culture, Ministry of Culture, Nicholas Yatromanolakis have sent their wishes.

“I wish that the 23rd Thessaloniki Documentary Festival will showcase – in the most effective way – all participating filmmakers and film productions. At the open-air cinemas of the city and through the online screenings, the audience will travel to the unseen parts of the world and experience some unique human stories and narratives” says the Regional Governor of Central Macedonia, Apostolos Tzitzikostas.

“The 23rd Thessaloniki Documentary Festival returns to the city dynamically, having inherited from last year the inventive and innovative spirit that was forced to emerge due to the pandemic”, mentions the Deputy Minister for Contemporary Culture, Ministry of Culture, Nicholas Yatromanolakis in his greeting.

“The difficulties caused by the pandemic have not halted its creative path, and the Documentary Festival remains, with screenings in physical space or online, at the center of the global film community, putting our city on the world cinematic map” says the Mayor of Thessaloniki, Konstantinos Zervas.

FOR A SAFE FESTIVAL

* Festival venue capacity is reduced to ensure the required safety distance between patrons.

*Tickets can only be purchased online.

* Venues are thoroughly disinfected before each screening

* Face masks are mandatory in all Festival venues and during screenings.

* Venues open one hour (1hr) before the screening time. Please arrive in good time to avoid crowding in the waiting areas.

* There will be no intermission during screenings. If you wish to purchase an item from the canteen, please do so before the screening starts.

The Festival is held with the support of National Public Health Organization in Greece (EODY). A mobile unit will be located on the Port’s Pier A to conduct rapid tests for the public between 9:30–13:30 and 16:30–20:30.

Nine open-air theaters in Thessaloniki will host the summer 23rd TDF, screening 92 films. Especially for the needs of the Documentary Festival, we created two pop-up screens in the Port of Thessaloniki, which will operate during the Festival, showing films of the program.

The open-air theaters that will host the 23rd TDF are:

Ciné Alsos of the Municipality of Neapoli-Sykies (74, Thasou St., Sikies)

Tickets for the Festival are issued exclusively online (www.filmfestival.gr and www.viva.gr). Ticket price: €4.

Thessaloniki Documentary Festival travels online throughout Greece: a total of 142 films of the Festival’s program will be screened online through the online.filmfestival.gr platform, giving the audience the chance to watch them from every corner of the country.

*The Festival’s ONLINE screenings are available through the website online.filmfestival.gr.

*Create an account if you don’t already have one, by selecting “Create account” located top right. Fill in your name, email and passcode. You can now watch the film

*Find the movie that you are interested in through search or through the lists in every section of the main menu. Every movie will be available for a limited number of screenings.

*You can purchase your ticket for all screenings before the Festival starts, but you can watch each film only on the day(s) it is screened online!

*When you select a film to watch, the ticket price (€3) is shown, and you can enter your credit or debit card info in order to complete the purchase. You will receive confirmation of payment via email.

*Press “Play Now” to start the screening. From that moment onwards, you have 24 hours to watch the film.

*In case you don’t complete the viewing, your ticket expires.

*Stay tuned daily to check the availability of the festival movies.

*We will be at your disposal daily from 10:00 to 24:00 through live chat, in order to answer your questions.

*Tickets to online screenings cannot be returned or cancelled.

Tickets for the online festival at online.filmfestival.gr. Ticket price: 3 euros.

Handpick ten films from the 23rd TDF’s program at a budget price for a unique cinephile experience offered by Mastercard. Bundle price: 20 euros.

Tina by Dan Lindsay, T. J. Martin is the opening film of the 23rd TDF. Revealing Tina Turner’s innermost struggles, and sharing some of her most personal moments, Tina is the defining and inspirational record of one of the greatest survivors in modern music. The documentary will be screened on Thursday, June 24 in John Cassavetes Open Air (invitation only) and Stavros Tornes Open Air (with tickets for the audience), at the Port of Thessaloniki.

Thrilling documentaries from around the world are presented in the three competition sections of the Festival. This year, the Festival presents more premieres than ever before. Thirteen films have their world premiere, eight celebrate their international premiere and seven hold their European premiere at the International Competition, Newcomers and >> Film Forward competition sections. For the first year, the Golden Alexander Newcomers award is renamed as Golden Alexander Newcomers "Dimitris Eipidis" and the cash prize that accompanies the award is increased to 10,000 euros.

SPOTLIGHT TO LEWIS AND NOAH KLOSTER

A spotlight to a brilliant filmmaking duo that experiments with animation documentary, drawing inspiration from pop culture and everyday encounters.

A journey to the most interesting documentaries of our times, in every geographical and cinematic altitude and latitude, in all four cardinal directions. The “Open Horizons” section presents 52 films that define their own coordinates and wait from us to discover them.

Greek documentaries are present and they are evolving rapidly. Overall, 78 Greek productions will be screened at the 23rd TDF and 8 Greek documentaries will compete at the international competition sections. For the first time in its history, the Thessaloniki Documentary Festival presents a fully accessible film screening through its online platform. With the support of Alpha Bank, the Festival’s accessibility sponsor, Marianna Economou’s When Tomatoes Met Wagner, which premiered at Berlinale will be screened online during this year’s edition Greek with audio description, Greek Subtitles for the deaf and hard-of-hearing, and intralingual subtitles. Thessaloniki Documentary Festival presents the premiere of an episode of the series The Generation of the ’30s, produced by COSMOTE TV. The Generation of the ’30s: Stratis Myrivilis will have a special screening at John Cassavetes Open Air.

The 23rd TDF organizes a tribute to director Stavros Kaplanidis who passed away recently, featuring three of his most important documentaries, as well as his last project, Teos and Stavros.

The Thessaloniki Documentary Festival is the first in Europe to present a new section devoted to the audio files that have taken over the world. Poetic, narrative, comical personal, intimate podcasts will be freely available to users from all over Greece through the website filmfestival.gr, exploring the eclectic affinities of the genre with cinema. The new section has: A competition section with 23 Greek-language and English-language podcasts, an Out of Competition section with 13 Greek-language podcasts and a Special Podcasting section with two podcasts from the US and Denmark, as well as with the special podcasts that the Festival will create for its 23rd edition.

The vision and the brilliant professional course of Dimitris Eipides, whose name became identified with the documentary and the Festival, is recorded in a bilingual special edition of 232 pages. Through texts by important personalities of world cinema and Eipides’ collaborators, as well as through rare photographs and material from his personal archive, the publication records the milestones of his life and career on five continents, from the 60's to the present. Sara Driver, Béla Tarr, Jafar Panahi, Alberto Barbera, Ulrich Seidl, Claude Chamberlan, Piers Handling, Andréa Picard, Toby Lee, Ally Derks, Mohsen Mahmalbaf, Elias Kanellis, Tassos Mantzavinos, Maria Katsounaki, Yorgos Krassakopoulos, Yannis Palavos and Orestis Andreadakis and Elise Jalladeu remember Dimitris Eipides and his contribution to global cinema.

AGORA DOCS OF THE 23rd TDF

Festival’s Agora, a meeting and collaboration hub for cinema professionals from around the globe, hosts:

It is imperative for us this year,  as well as throughout the pandemic, to support the Greek film community. This year, 10 Greek projects are participating in Agora Docs, while 106 Greek documentaries will be available to accredited professionals around the world.

THE POSTERS OF THE 23rd TDF

The posters of the 23rd Thessaloniki Documentary Festival are created by photographer Olga Deikou.

THE SPOT OF THE 23rd TDF

First Festival in the summer! Since March 2020, we watched films separately. Now it’s time to watch films together! We are expecting you to the open-air theaters of Thessaloniki in order to enjoy the best documentaries of the year in a summer mood.

Music: Panayiotis Pantazis / "Hit me like a current on the track" (feat. Melentini / The Running Blue Orchestra) from the album Phantasmagoria Two.

For more information on TDF’s program and the films, you can visit: www.filmfestival.gr. All collectible items and editions are available to the two Festival shops (Box at Aristotelous Square and Thessaloniki Cinema Museum), as well as to the Festival e-shop.

The 23rd TDF is feasible through the support of the Ministry of Culture and Sports, the NSRF program of the ROP Central Macedonia 2014-2020, and the MEDIA program. Also, of great value was the support offered by ERT S.A., COSMOTE TV, the Festival’s grand sponsor, Alpha Bank, our accessibility sponsor, Mastercard, the Festival’s official payment card, Aegean Airlines, TIFF’s official air carrier, Fischer, sponsor of the Audience Awards and VELMAR, mobility sponsor. We thank the Greek National Tourism Organization (EOT), the Greek Film Center, the National Centre of Audiovisual Media and Communication (EKOME) and the City of Thessaloniki. Enjoy the screenings!