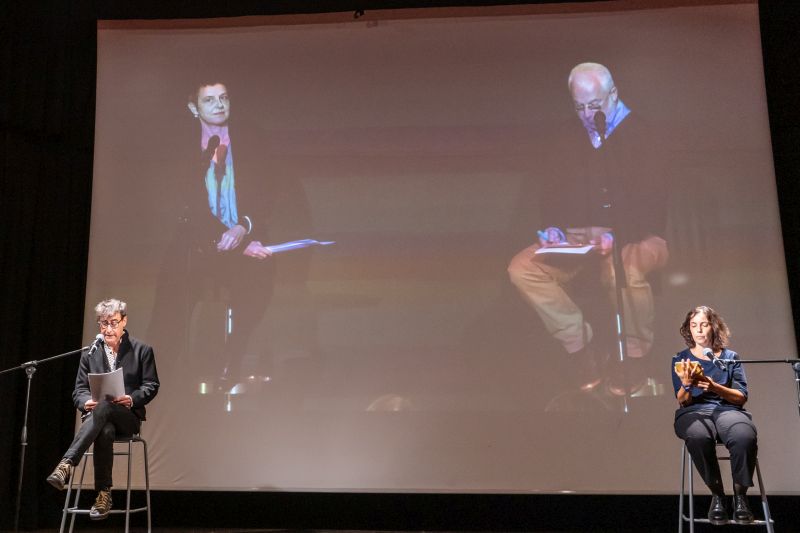 The Festival is coming home!

The 62nd Thessaloniki International Film Festival is returning to its home turf, the movie theaters, prioritizing safety and abiding by all health and safety protocols, from Thursday 4 to Sunday 14, November 2021. This year’s celebration of independent cinema will take place in physical spaces, but online as well.

Within the framework of the 62nd TIFF, 197 films will be screened in the time-honored home ground of the Festival, theaters Olympion, Pavlos Zannas, the theaters situated in the Port of Thessaloniki, Frida Liappa, Tonia Marketaki, John Cassavetes, Stavros Tornes, as well in the movie theater Makedonikon. In addition, the audience will have the chance to watch 144 films online, through the digital platform of the Festival, online.filmfestival.gr.

Greek painter and multimedia artist, Konstantin Kakanias, is the creator of the 62nd TIFF’s posters, featuring the one-of-a-kind Ms Tependris, whereas the Festival’s spots were directed by Manolis Mavris, awarded at the Cannes’ International Critics’ Week.

- The recipient of the Golden Lion at Venice Film Festival, Audrey Diwan’s The Happening (L’Événement) will signal the 62nd TIFF’s kick-off, on Thursday, November 4th 2021.

- The film Paris, 13th District (Les Olympiades) by Jacques Audiard will close the curtain of this year’s Festival on Sunday, November 14th, 2021.

- 2 beloved films, universally accessible both in their physical and online screenings

- 8 benchmark films of Greek cinema, within the context of the tribute “Motherland, I See You”

Moreover, the awarded films of the recent 44th Drama International Short Film Festival will also be screened at the 62nd TIFF.

The Festival offers a full-scale and wholehearted support to Greek cinema through the action Meet the Future, showcasing seven up-and-coming editors from Greece, the casting directors workshop, held in collaboration with the Greek Film Centre, addressed to young actors from Greece, as well as the new initiative Short Film Lab.

*A total of 14 films are taking part in the International Competition section of the 62nd TIFF, among which three Greek films. The 14 IC films are competing, among others, for the Best Full-Length Award “Theo Angelopoulos” (Golden Alexander, accompanied by a 10,000 euros cash prize), the Special Jury Award (Silver Alexander, accompanied by a cash prize of 5,000 euros), the Special Jury Award for Best Director (Bronze Alexander), which is backed by COSMOTE TV, the Festival’s Grand Sponsor, with a cash prize of 3,000 euros.

* Twelve films are lining up in the Meet the Neighbors competition section, among which three Greek films. The 12 MtN films are competing for the Golden Alexander (cash prize of 8,000 euros) and the Silver Alexander – Special Jury Award (4,000 euros).

* The much revered by film lovers >>Film Forward section is leveled up to competition status, showcasing out-of-the-box films. A total of 11 films take part in the section, among which three Greek films, competing for the Golden Alexander (cash prize of 8,000 euros) and the Silver Alexander – Special Jury Award (4,000 euros).

* We discover the most dynamic and innovative cinema trends in the Open Horizons section, as well as in its sub-section Open Horizons – Another Take.

* We present the best Balkan movies in the Balkan Survey section.

* We catch up with our favorite directors in the Special Screenings.

* We meet up in the late hours zone of ‘Round Midnight.

* The 62nd TIFF gives prominence to the young generation voices through the NextGen section.

A LARGE-SCALE TRIBUTE TO EDITING

The 62nd TIFF hosts a unique tribute, titled “In the Cut: Editing and its Secrets”, on one of the most pivotal stages of filmmaking.

Dynamic activities, awards, collaborations and partnerships are hosted by this year’s Agora, held both in physical spaces and online. With beloved TV presenter, actor and journalist Fotis Sergoulopoulos as its ambassador, Agora will bring the international professionals in contact with the Greek cinema community. TIFF’s Agora, supported by the Creative Europe MEDIA and granting awards in the form of cash prizes and services of a total amount of 200,000 euros, will take place from November 5 to November 13 2021.

“THE RULES OF THE GAME” EXHIBITION

Jean Renoir’s masterpiece, The Rules of the Game, will serve as guideline and bedrock for the main, original exhibition of the 62nd Festival. Ten visual artists draw inspiration from the movie and create ten works that will be showcased at the former Nursery Station (Port of Thessaloniki).

Sixteen Greek-speaking and English-speaking podcasts take part in the Podcast competition section of the Festival, while the audience will have the chance to enjoy another ten podcasts out of competition.

The Festival presents its two special editions that are scheduled to hit the bookstores, in collaboration with Nefeli publishing:

The Festival’s program, as well as more information on the films, are available on www.filmfestival.gr. Presale season opens on Tuesday, November 2nd.