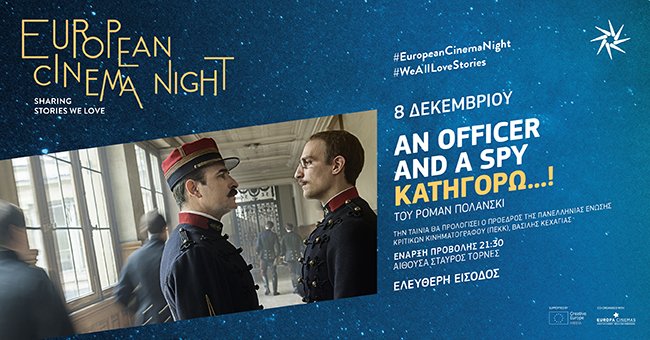 Thessaloniki International Film Festival celebrates the 4th European Cinema Night, with the free screening of the film An Officer and a Spy, directed by the tireless cinema master, Roman Polanski. The movie, bestowed with the Grand Jury Prize, as well as with the FIPRESCI Jury, at the 76th Venice Film Festival, will be presented to the audience in a free screening held on Wednesday December 8, at 9.30pm, at Stavros Tornes theater (Warehouse 1, Port of Thessaloniki). In addition, the screening will close the curtain of the tribute hosted by Thessaloniki Cinémathèque, showcasing a selection of films that topped the voting conducted by the Greek Film Critics Association (PEKK), for the best Greek and foreign films that hit Greek theaters during 2020. The screening will be preluded by PEKK’s president, Mr. Vassilis Kehagias.

European Cinema Night is an action carried out by the European Commission since 2018, through the MEDIA – Creative Europe program. Within the framework of this initiative, film screenings are held in a series of European cities, aiming to bring forth the European cinema culture and amplify the contact between the EU citizens through the magic of cinema.

A brief presentation of the film:

An Officer and a Spy / J’accuse

Roman Polanski takes us back to the memorable «Dreyfus affair», that shocked French society in the final years of the 19th century, drawing inspiration from the famous letter by Émile Zola, published in the newspaper L’Aurore, in January 1898. A historical drama that unfolds in the form a policier mystery, shedding light onto the most inconvenient truths concerning the discriminations, the injustices and the prejudice nurtured within every society.