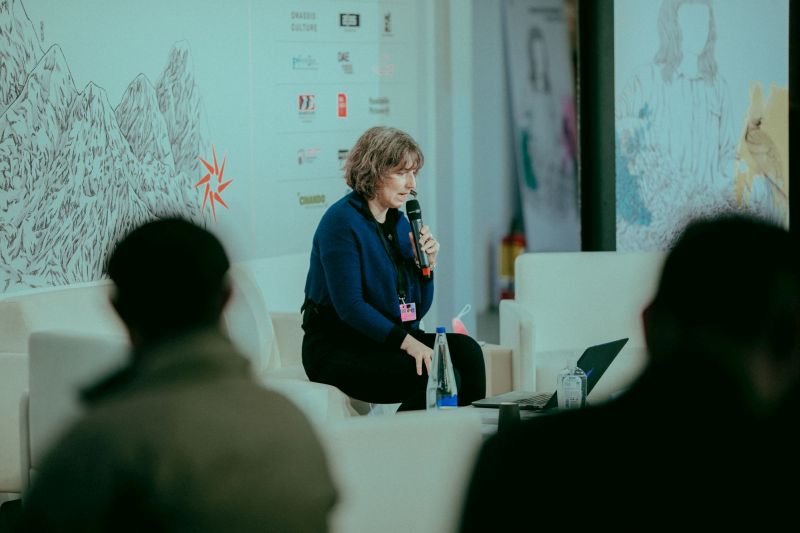 The “presentation of the platform Filmmakers-for-Ukraine” set up Crew United, was carried out on Friday, March 18th, at warehouse C, as part of the Agora Docs of the 24th TDF. Crew United brings people together to help the people of Ukraine. Film network Crew United’s team created the online platform “Filmmakers-for-Ukraine”, an information website on which Ukrainian filmmakers and their families can seek for help fast. Venia Vergou, from Crew United Greece, talked about the goals of this Crew United initiative, explaining the structure and information methods of the platform, and invited anyone interested to contribute.

Yianna Sarri, Head of Agora, invited Ms. Vergou and the audience to the talk. “This is an issue of vital importance which we added to the talks after the main program was announced”, she said in relation. Venia Vergou then took the floor and thanked the Agora for the opportunity to present the platform. About Crew United, she mentioned: “Crew United is a film network, active in Germany for the past 26 years. It has been evolving all this time, with the members contributing yearly a symbolic amount. The network expanded in Poland and France, while it will soon expand in five more countries, one of which is Greece of which I will the representative. The members can improve their skills and network via the program. Crew United includes all the audiovisual projects of the country, offering to the people of the field the chance to network”.

When the work broke out in Ukraine, they started to think of ways to utilize the network to contribute to the film people of Ukraine, and this is how Filmmakers for Ukraine came to life. “There is an amazing team of volunteers from organizations, mainly in Germany and Poland. Poland welcomes the people at the boarders and the response by Polish film professional is remarkable. At Filmmakers for Ukraine, we try to provide to the filmmakers with the information they need as soon as possible. We also assist marginalized groups such as Roma people, the LGBTQ+ community, young kids, among others”, she explained.

“On the website, on the Find Help – Get Help page, anyone can find the help they need, in the sectors of employment, hospitality, relief goods etc. We bring people together so that they can cooperate. We receive dozens of emails from Ukrainian filmmakers who look for jobs in a foreign country. We ask for a CV that is uploaded on the website, and we help them network with professionals that may be interested. On the page Donate, anyone can see what they can offer to facilitate the situation”, she added.

There is also the page Movies, which includes a list of films relevant to Ukraine or made in Ukraine, aiming at promoting the Ukrainian cinema landscape. “There is information available for every film. We try to include also documentaries from the 24th Documentary Festival. On that list, there are films that can help people understand the complex historic circumstances that lead Ukraine to the position it is today”, she commented.

At this point, Marco Gastine of the Greek Documentary Association took the floor, to share his thoughts, written in the form of a letter:

An initiative of the Greek Documentary Association/Hellas Doc

We, Greek filmmakers, producers, directors and creators of cinema and documentary film:

Demand for the immediate cessation of the military invasion of Ukraine, as well as the unconditional departure of Russian troops.

Believe that this Russian invasion violates every fundamental principle of International Law, human rights, freedom and Democracy. It does not only threaten Ukraine, but also world peace.

Stand in solidarity with our Ukrainian colleagues and every citizen whose life and freedom are under threat while their country is being savagely destroyed.

Stand in solidarity with our Russian and Belarusian colleagues, as well as all who bravely express their opposition to this war, defying arrest, censorship and newfound “legislations” that could incur 15 years in prison.

Implore the Greek government, social organizations, institutions and ordinary citizens to effectively support humanitarian aid towards Ukraine and its citizens.

“We are overwhelmed by the situation, and we want to help. Whoever wants to do so, can sign the letter. We are collaborating with DAE, the European Association for Documentary. We ask of our members, filmmakers, even the audience, to contribute financially. I ask of the documentary community to be more active in the process of assisting Ukraine. This initiative, Filmmakers for Ukraine, is exceptional and can practically assist the situation. I also want to personally condemn the moderate attitude of the Greek Film Academy towards the war in Ukraine. Their stance is not enough. We have to effectively oppose the war, as all the Film Academies of the world have done, especially in Europe. It is our duty to oppose loudly against the atrocities of the Russian government”, Marco Gastine emphatically stated.

Moving on, Venia Vergou agreed with Marco Gastine, and stressed that it is easy to make statements against the war, but it is hard to turn them into action. “The help offered by Filmmakers for Ukraine is real, and that is reflected on the numbers and the outcome. Via the platform, people find actual help. If you can think of any other way to help, please contact us at the email address This email address is being protected from spambots. You need JavaScript enabled to view it. .

Finally, Ukrainian actress Romanna Lobach, actress and producer, took the floor to thank the Greek Documentary Association which took a stance and raised their voice: “It is essential that we take a stance, and not just on social media. If you don’t have a clear stance, you have no say about the facts. This is the third week of war: we can no longer stay silent”.