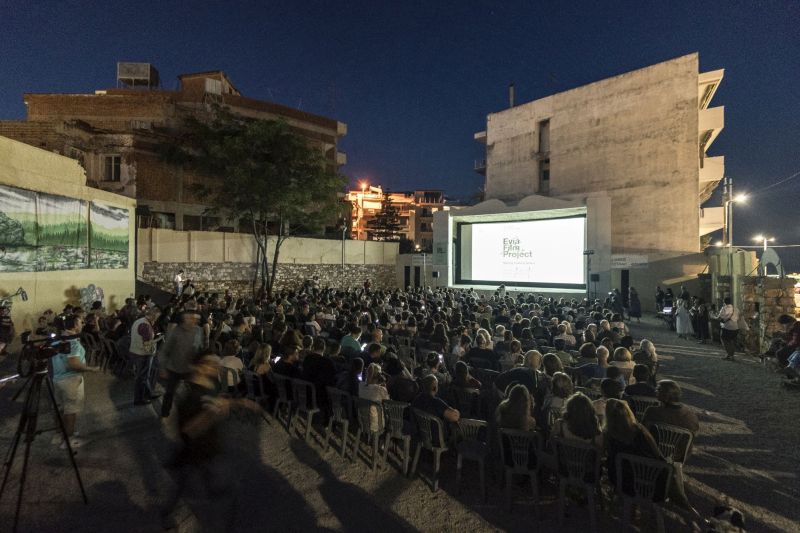 The opening ceremony of Evia Film Project (June 15-19, 2022) was held in an emotional ambience and with an optimistic take on the future, at the open-air theater “Apollon”, in Edipsos. The ceremony’s host and member of the Thessaloniki Film Festival team, Vassilis Terzopoulos, greeted the audience before giving the floor to the General Director of the Festival, Elise Jalladeau, and the Artistic Director, Orestis Andreadakis.

Elise Jalladeu went on to take the stage, addressing a greeting to the Vice Regional Governors, the two Mayors and the deputees attending the ceremony. “Thank you for welcoming us. Following last year’s disastrous fires, we felt the need to contribute and convey your frustration to the world, making use of all means at our disposal: movies, educational actions, activities for children. This is our line of work and we tried to carry it out the best way possible. It goes without saying that nothing could have been done if it hadn’t been for your help and support,” pointed out Ms. Jalladeau before passing the baton to Mr. Orestis Andreadakis.

“For the first time in its 62-year history, the Festival is leaving its home ground, Thessaloniki, travelling to Northern Evia, to host Evia Film Project. Last summer’s images haunted us and left a mark on our soul. That’s why we felt the need to come here and plant a little seed of culture and growth. The 500 guests coming to Northern Evia from Greece and all over the world will boost the local economy, get acquainted with this wonderful place and its people, and return home with the message that Evia can and will be reborn, in the direction of sustainability, with respect towards the environment and the ecosystem, but also towards the necessity of growth. On behalf of both the Thessaloniki Film Festival and Evia Film Project, I would like to thank the Ministry of Culture and Sports, the Region of Central Greece, the Municipalities of Istiaia-Edipsos and Mantoudi-Limni-Agia Anna, Creative Europe Media developmental program, the Greek Film Centre and the Hellenic Film Commission, the Museum of Cycladic Art, iMEdD, WWF, Marvila Studios, MIDPOINT Institute, Pitch the Doc, Minoa Waters, attica store and, of course, Polygreen. Most of all, though, I would like to thank the residents, the businessmen and the working people of Northern Evia. Your frustrations are ours, and we have grown to share the love you have for this wonderful place,” concluded Mr. Andreadakis.

The Mayor of Istiaia-Edipsos, Mr. Yannis Kotzias, was the next to take the floor, initially expressing his feelings of pride for the people of Northern Evia, who coped with a tremendous disaster, organized a local network of support and displayed solidarity, which spread out throughout the country, reaching out even outside the Greek borders. “What we experience today is an expression of this solidarity. Leaving the ashes of yesterday behind us, we are hosting a celebreation, the birth of Evia Film Project, in tandem with with the rebirth of a historic venue. The restoration of cinema-theater “Apollon” was within our intentions, but Thessaloniki Film Festival’s contribution speeded up the process, allowing us to open the doors of this cultural venue for our townsmen and visitors”, stressed out Mr. Kotzias, who concluded by thanking Mr. Andreadakis and the Festival team, the Ministry of Culture and Sports and Minister Ms. Mendodi, as well as the Municipality’s staff for giving their very best to this effort.

The Mayor of Mantoudi-Limni-Agia, Mr. Yorgos Tsapourniotis, was the next in line, sharing his feelings of emotion at the thought of hundreds of people coming to Evia from all over the world, just ten months after the calamitous wildfires. “Solidarity sprang out from this disaster. Both Municipalities offer their wholehearted support to the Festival’s initiative, as the ongoing rebirth of this territory will receive a further boost through such events. I would like to congratulate Mr. Andreadakis and his team, who have maintained a consistent presence in our area over the last five monts” mentioned Mr. Tsapourniotis.

Ms. Maria Anagnostou, Vice Regional Governor of Central Greece, Responsible for Cultural Affairs, closed the round of speakers, welcoming the audience to the first Evia Film Project in a state of emotion, also on behalf of the Regional Governor of Central Greece, Mr. Spanos. “This initiative launched by Thessaloniki Festival is part of a wider reconstruction plan targeted at Northern Evia. Our goal goes way beyond the creation of a meeting point for filmmakers, as we have our eyes set at offering a creative outlet for the people of Northern Evia. There’s no message more endearing than the thought that our children will grow up within the realm of sucn an institution”, she concluded.

The ceremony’s host, Vassilis Terzopoulos, called it a wrap with a brief summary of the opening film, The Green Planet (La Belle Verte) by French director Coline Serreau, a surreal eco-awareness comedy and one of the first films to ever bring forth the dreadful repercussions of climate change. In addition, he made a mention to the eco water packages offered free-of-charge to the audience by Minoa Water, as well as to the recycling bins place in all Evia Film Project venues, in collaboration with Polygreen.