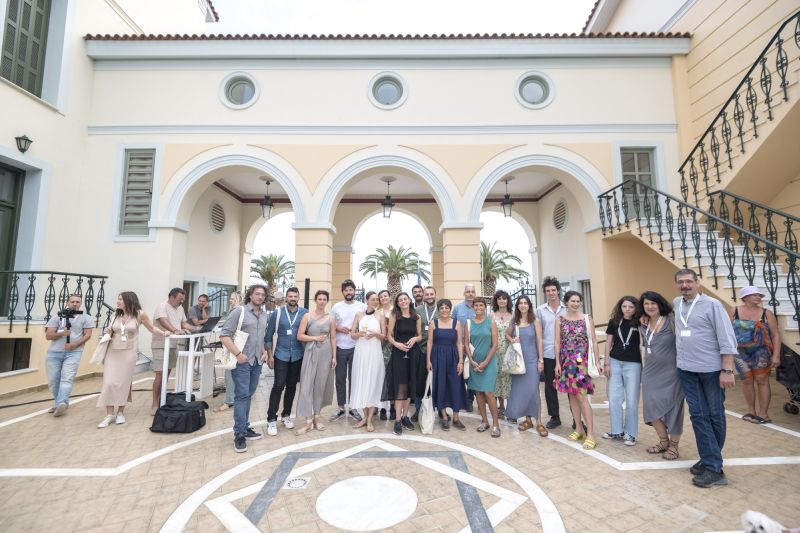 In a cheerful and optimist ambience, Agora’s awards were bestowed within the framework of the first Evia Film Project, at Thermae Sylla Hotel, in Edipsos, on Saturday June 18th. Yianna Sarri, head of the Agora, opened the event, warmly thanking all producers and filmmakers for their presence, as well the jury for its work during the Evia Film Project. The event’s host, Vassilis Terzopoulos, gave the floor to the General Director of the Thessaloniki Film Festival, Elise Jalladeau. “I would like to thank all pioneers, taking part in the first Evia Film Project, thank you for travelling to Evia to be with us. I would also like to thank our sponsors, MIDPOINT Institute, Pitch the Doc, Media Desk Greece and Marvila Studios”, mentioned Ms. Jalladeau before passing on the torch to the Artistic Director, Orestis Andreadakis. “Evia Film Project was an act of love for Northern Evia. Therefore, once you return home, don’t forget this wonderful place and its people. They deserve not to be forgotten”, commented Mr. Andreadakis.

MIDPOINT Institute decided to support an ambitious biopic project about a scientist who discovers hidden mechanisms of nature while struggling to understand its own kind and the mechanisms of love. The MIDPOINT Consultation Award goes to the Hungarian project Falling into Silence directed by György Mór Kárpáti, co-written by Zsófi Lányi and produced by Eszter Kozma (original idea) and Viktória Petrányi - Proton Cinema.

“We award PITCH THE DOC CONSULTATION PRIZE to a film that will illuminate an urgent crisis from two perspectives: above and below the water.  The award goes to Sunken”.

The Special Jury Prize for Creative Vision was the next in line, announced by Rea Apostolides.

“We award SPECIAL JURY PRIZE FOR CREATIVE VISION to a powerful debut film that captures the anxieties of our times through rich characters whose values collide in the natural world. The award goes to Resonance”.

The Project in Developments Awards called it a wrap with Evia Film Project in Development Award, accompanied by a 4,000-euro award. The award was announced by Edvinas Puksta, who thanked the fellow members of the jury for their impeccable collaboration during Evia Film Project, as well as the entire Agora team, repeating once again that the competition level was extremely high.

“We award EVIA FILM PROJECT IN DEVELOPMENT AWARD of 4000 Euros in cash to a film that works on multiple levels, embracing the complexity of our relationship with the land. It immerses us into the lives of individual characters and an ancient community in transition to tell a story with global implications. The award goes to Unwritten Land”.

Award-winning director Natasha Blatsiou expressed her surprise for this honor, making a parallelism between the film’s theme and the disaster that hit Northern Evia last summer, urging everyone to wonder what kind of life we want for the future.

Projects in Progress came up next, as Vassilis Terzopoulos invited Roland Vajs on stage to bestow the Marvila 119 studios - Post-production Award for Sound Mixing and Color Correction. The winner was announced by Rea Apostolides.

“The Marvila 119 studios Post-production Award for Sound Mixing and Color Correction goes to an urgent and poetic film about food sovereignty and those struggling to reclaim it. The award goes to Harvest Moon”.

The curtain call of the event came with the bestowing of the Evia Film Project in Progress Award, accompanied by a 6,000-euro cash prize, announced by Ms. Libresco.

“The WORK IN PROGRESS AWARD of 6,000 Euros cash goes to an emotional film about the profundity of what’s right in front of us, and the meaning we can draw from our connection to the land and each other as we age. The Award goes to Garden from North Macedonia”.

Award-winning producer Ilija Tiricovski expressed his surprise over this award, warmly thanking both the Coordinator of Agora, Angeliki Vergou, for accepting the film in Evia Film Project, and Thessaloniki Film Festival, making a wish that Evia Film Project would live and prosper for many years to come.