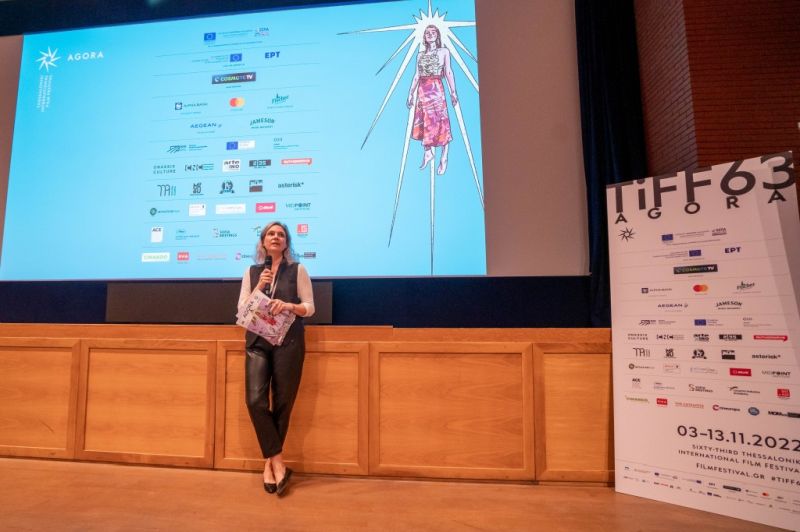 In the framework of the Agora of the 63rd TIFF, the presentation of the projects taking part in the Crossroads Co-production Forum took place, on Monday November 7. The Forum aims at bringing forth projects in development from countries of Southeastern Europe, the Black Sea and the Mediterranean region and gives producers and directors the opportunity to present their ideas to potential financial partners, receive feedback and expand their professional network. At this year's Agora Crossroads Co-production Forum, 14 projects from the following countries were presented: North Macedonia, France, Greece, Spain, Italy, Cyprus, Lebanon, Ukraine, Romania, Slovakia and Slovenia.

Angeliki Vergou, Head of the Agora, was the first to take the floor and welcomed the producers and directors. Elise Jalladeau, General Manager of the Festival, followed by thanking the professionals for their presence at this year's Agora, as well as Mrs. Vergou's partners and team. "This year, for the first time, the Festival launches the new Agora Series section and dedicates a whole day, on Thursday, November 10, to the local and international television scene, also launching a series of Think Tanks on the future of film markets, carried out in cooperation with other European film markets", she said.

Mrs. Vergou, in turn, referred to the initiative of the Evia Film Project, held last June, towards a more sustainable festival, as well as the integration of practices adopted this year by the festival to reduce its environmental footprint, such as the collection of coffee residues for the manufacture of pellets, while another first for this year’s Festival is that Agora Talks take place at the MOMus- Museum of Photography. She then thanked her collaborators, Thanos Stavropoulos, coordinator, Errika Zacharopoulou, coordinator of the Crossroads Co-production Forum, Elena Gaitanarou, Works in Progress assistant, Dimitra Kapsala, responsible for the meetings, Melin Karaoglanian, member of the networking team and, finally, Niki Xenou, project manager of Agora Series”.

The following 14 projects were presented to international professionals and the film market:

LIFE IN A BEAT

LOVER, NOT A FIGHTER

Later on, the presentation of Agora Works in Progress kicked off, showcasing a selection of films from the countries of Southeastern Europe and the Black Sea and Mediterranean Sea regions, giving the opportunity to the filmmakers to present their film, just before its completion, to potential financiers, sales representatives, distributors and festival developers. Eight films participated in the Works in Progress section of the Agora from the following countries: North Macedonia, Bulgaria, France, Germany, Switzerland, Greece, Italy, Kosovo*, Croatia, Lebanon, Serbia, Slovenia and Turkey.

Prior to the presentation of the films, many of them being part of Crossroads co-production in the past, Mr. Andreadakis, Artistic Director of the festival, was given the floor: "I was thinking about the main theme of this year, resulting from Theodoros Angelopoulos' first film, Reconstruction, and which is the very essence of cinema. So I am very glad that I will be able to see your own reality, as well as its representation by you”, then Hakim Mao of Initiative Film, took the floor and prefaced the teams that presented the corresponding projects and presented an 8-minute clip of them.

The films presented are:

THE SEA AND ITS WAVES

*This designation is without prejudice to positions on status, and is in line with UNSCR 1244/1999 and the ICJ Opinion on the Kosovo declaration of independence.