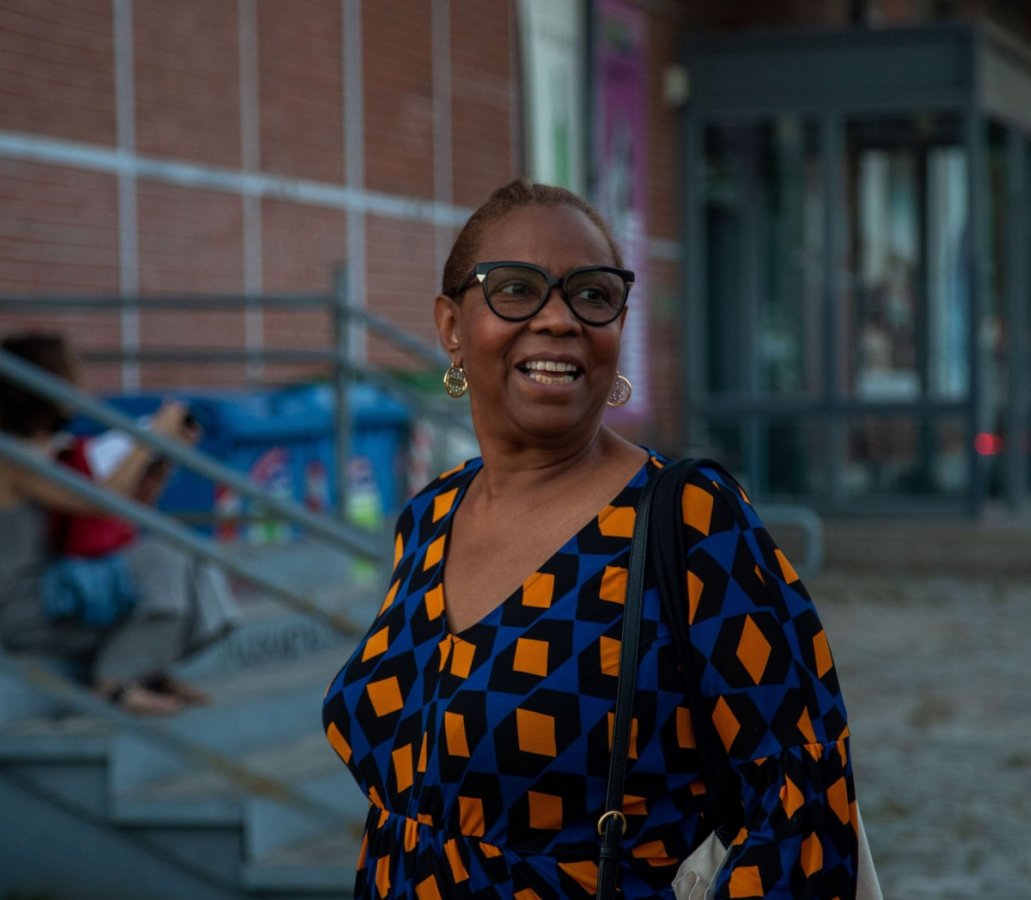 The world premiere of the film Little Satchmo, directed by John Alexander, took place on Tuesday June 29th, with a screening under the stars, at the pop-up open-air theatre John Cassavetes Open Air, at the Dock A of the Port of Thessaloniki. The private life of the iconic musician Louis Armstrong had a great secret: Louis Armstrong was the father of a daughter, whom he treasured, without ever acknowledging his paternity in public. Now, fifty years after the death of this musical genius, a woman forced to live a life in the shadows breaks her silence, as the co-screenwriter of this unexpected and fascinating documentary. Sharon Preston-Folta, Louis Armstrong’s daughter, along with her husband, Howard Folta, and Shawn Rhodes, the associate producer of the film, attended this world premiere.

Shawn Rhodes mentioned: “I wish to thank you all for inviting me. In St. Peters, Florida, I heard for the first time about a great idea for a film – in the movie business you may often hear people mentioning great ideas – with regard to Louis Armstrong’s daughter. And I asked myself: Did Louis Armstrong have kids? Evidently, he did and this is our chance to find out this story. Sharon, tonight is your night. You kept this secret to yourself for all of your life and now you get the chance to put it out in the open. From now on you make a new start in your life”.

A Q&A session was held after the end of the screening. One question posed to Sharon revolved around the reason why Louis Armstrong denied acknowledging his paternity. Sharon replied: I believe the reason was the fact that he was still married to his fourth wife. She was willing to adopt me, but my mother would never accept that. So, it’s a combination of these two reasons. He could not acknowledge paternity for he would be obliged to admit his affair with my mother”.

Afterwards, Sharon Preston-Folta was asked whether she still felt his father’s presence and what she would say to him if he was still alive. Sharon replied: “Certainly, I still feel my father’s presence; there are times where this feeling is so strong. I will share with you a recent incident. Ι always listen to a radio broadcast in WBGO radio station in New Jersey, called Singers Unlimited. I didn’t have the chance to listen to it due to my trip to Thessaloniki. Coincidentally, the radio producers decided to do a special tribute to Louis Armstrong on the occasion of his forthcoming anniversary of his birth on the 4th of August. This brought me once again really close to him. I think that if he could see this film, he would be very satisfied with this endeavor, as we portray his human side and not only his profile as a musician. We all know his music, his genius, but people know nothing of his more personal side. I think that he would be proud of me, as he was when I was a kid”.

She goes on to say: “There were times I wanted to back off; I always put the blame on my mother as we were marginalized as a family. I was very angry at my parents because they did not take me into account when they decided to separate. I grabbed the opportunity, through this film, to speak my own truth. I realized, during my research, that my father never talked about me, but once in a letter sent to his manager, when the book On his own words was about to be released. In this letter, through detailed references, he seemed to be proud of being a father, of getting my mother pregnant. I was in great pain because I felt that people didn’t care about me at all. I didn’t have an idea how I would go on, so I decided to take a break. I took a deep breath and kept going”.

Louis Armstrong’s daughter replied to a question on whether she has gained anything of this situation: “The most important thing I learnt was compassion. I was taught to control my anger, not to blame others for everything. I also managed to take into account the difficult era we were living in. We were Afro-Americans in the 50s and 60s and there was a strong social suppression. I also learnt that no-one can escape from his past and the only thing we can do is to make peace and move forward. This entire situation helped me to know myself, know my parents and forgive them”.

She also answered to a question about her relationship with her father’s wife and about the way her friends reacted when they found out she was Louis Armstrong’s daughter: “I have never met my father’s wife. She passed away in the mid-80s. As a child I never used to talk about my story. After all my mother had been married to another man, so everyone believed that she was a widow and that I was her husband’s child. Closer relatives were the only ones who knew. I started talking about my story as an adult. Initially, I shared it with close friends. The more I discussed about that the easier people got acquainted with this story and realized it was not something I made up”.

She replied to a question on whether she had some other father figure in her life: “Mainly my father, but also my mother’s brother, my uncle Kenny. He was very close to my mother as well. He was always trying to do the best for us both. He was that man I could count on. He was the man who walked me down the aisle on my wedding day. I also asked for his approval in my first steps as a writer and he offered me his support with great generosity”.

She also replied to a question on the things she accomplished on her own: “I was determined, I was motivated, I would dare to say talented. I did not bear the Louis Armstrong name, so I did not enjoy any privileges. However, he backed me up financially and I received a high level of education. Ι managed to make good use of all these resources and I was lucky enough to have good teachers and people around me who supported me”.

Shawn Rhodes also replied to a question on his experience of this film: “It was great for me to have the opportunity to tell the story of this man, as well as the story of his family; a man that changed the course of history not only of music but of mankind as well. It was a great honor for me. I had always been searching for such an opportunity and I was blessed to meet Sharon and work with her”.