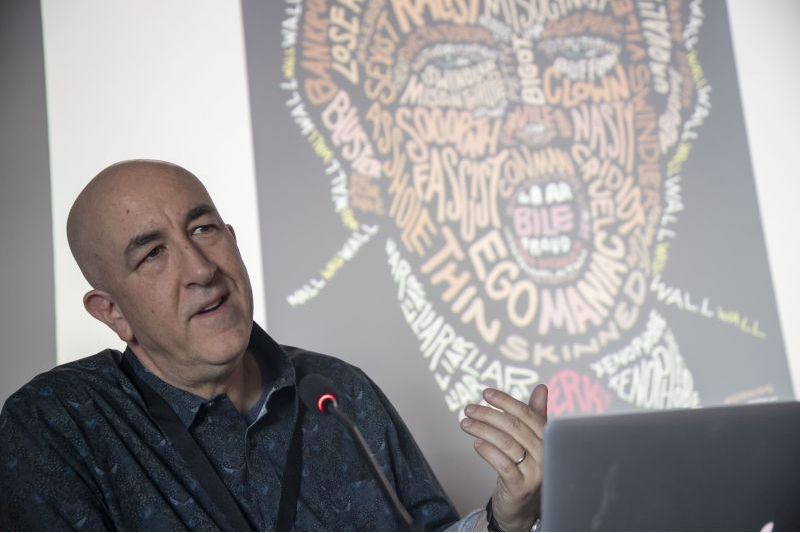 The Greek-American John Mavroudis, one of the most influential contemporary illustrators, awarded with the Cover of the Year for covers created for The New Yorker and TIME magazines, and, also, creator of the poster for the anniversary 60th Thessaloniki International Film Festival, gave a masterclass on Tuesday, November 5, 2019, at the Photography Museum of Thessaloniki, where he looked back on the high points of his career, and shared with the audience his views on art and politics.

The Artistic Director of the Festival, Mr. Orestis Andreadakis, welcomed the artist to the anniversary Festival and stressed that “the poster is one of the best in its history”. The coordinator of the talk and Director of Communications of the Festival, Ms. Dimitra Nikolopoulou, emphasized that John Mavroudis is “one of the most important illustrators, and also one who combines art with activism.”

Initially, Mr. John Mavroudis apologized to the audience for his Greek being not good, except for, as he amusingly put it, phrases like “are you not ashamed” and “eat your food”. He then talked about the tools he uses for creating his posters. “I use pencils, pens and brushes, yet with the use of the ipad I can find the quality I’m looking for in my creations; I don’t particularly like computer illustration”, he said characteristically.

Recalling his past, Mr. Mavroudis said that he grew up in a family interested in politics and he remembers his parents, aunt and uncle often having heated discussions. He acquired international repute thanks to the TIME magazine cover of dr. Christine Blasey Ford, depicted by her famous sayings: the professor of psychology who accused Donald Trump’s pick for the Supreme Court, Brett Kavanaugh, of sexual assault, appears as a drawing made from words and phrases taken from her deposition. “My collaboration with TIME magazine was a turning point of my career; they saw my Hilary Clinton poster, and they wanted it at very short notice, in just two days. As soon as I hung up, I wondered, can I do it? This work had a tremendous appeal: the day after the publication I received 4,000 tweet notifications. I wasn’t prepared for something like that. My family was subscribed to the magazine since forever, so that was a great honor for me.”

Mr. Mavroudis had used the same method earlier in his career to create the portrait of the American President Donald Trump for The Nation. “I was sick and tired with him going into politics and before the elections I had prepared a list with the words that suited him, so I wouldn’t have to explain all the time the reasons for which I dislike him; a lot of people commented that the words looked like worms, and I am OK with that. Now, of course, if I could, I would add some words. Trump infuriates me because he must not be aware what the word empathy means; how it feels to put yourself in someone else’s shoes. I was very keen on this portrait being published, and that led to the creation of a Trump Cult Series, with portraits of politicians who now support Trump (like Marco Rubio), but before the elections were against him.”

The creator also mentioned his most recent collaboration with the magazine. “The cover numbers 253 locations in the States where mass shootings occurred, and that just in 2019; in the center the word “Enough” is displayed. It is the terrifying portrait of a country drowning in gun violence, with the majority of this country’s residents saying no to it – and that because it is subservient to the interests of an industry and its instrument, the NRA. It is unbelievable that our politicians do nothing when it comes to the NRA.” He is now busy with making a portrait for Bob Dylan. “Nobody commissioned it, I do it for me because I admire him.”

He also talked about… rejection. His idea for the fifth anniversary of the Twin Towers terrorist attack became a double cover for The New Yorker; the high-wire artist Philippe Petit was depicted walking on the void, without wires underneath or the Twin Towers around. These particular sketches, shown to the masterclass audience, were not ultimately published, since another artist’s sketches were chosen. “Everybody knows rejection, and as an artist you have to be resilient, you need to have a tough stomach”, he noted.

He also mentioned his love of music, since his initial work was for band posters; one was inspired by The Little Prince, and another one was inspired by René Magritte. “I draw inspiration from books and movies, among other stuff. Faces follow me everywhere, so I draw faces, too. I also love old journals, and I played around with words from old newspapers on photoshop; in that way I made a lot of illustrations for bands”, he said and noted that he gradually started creating his own lettering.

In what concerns his collaboration with the Thessaloniki International Film Festival he emphasized: “I had made some posters for the San Francisco Film Festival. When the Thessaloniki International Film Festival proposed that I make them a poster, I did my research for the city and the Festival; I started creating a face and they liked the idea. At the same time, I was given a list of words and the pieces came together. Having the opportunity to play with letters is a hypnotic process. Besides, the psychedelic posters from the 60’s have been a great source of inspiration for me.”

Concluding his masterclass, Mr. John Mavroudis demonstrated live for the audience how he creates his illustrations. “I start on a black canvas – not white – and I draw a lot of faces until I hit my stride. My daughter Athena says that my faces are always melancholic, but this is the way I do it. Furthermore, during the creation of a poster, there are two moments that prove quite stressful: the first one concerns whether the idea will work and the second how to flatter the face that I draw. Trump excepted”, he added.