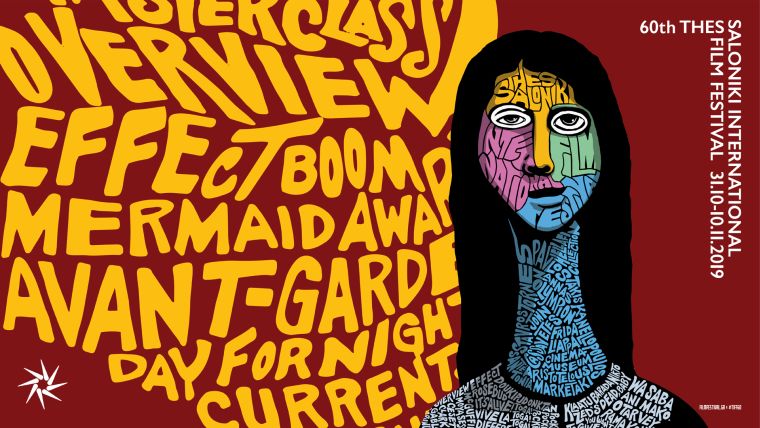 We welcome you to the anniversary, 60th TIFF

The Thessaloniki International Film Festival celebrates 60 years of Festival with wonderful films, exciting guests, events in the city of Thessaloniki, a comic, exhibitions, tribute, the present, and future of Greek cinema and a new competition section.

The famous illustrator John Mavroudis designed the posters of the 60th TIFF, while the official spots were directed by the Palme D' Or winner for short film, Vasilis Kekatos.

The Festival starts on Thursday, October 21 with the disarmingly true film Marriage Story by Noah Baumbach.

Closing Film
The closing ceremony of the 60th TIFF takes place on Sunday, November 10 with the unexpectedly funny and moving film Jojo Rabbit by Taika Waititi.

*The 60th TIFF sees the 14 films of the International Competition section through the prism of the Overview Effect, the experience of watching the earth from space, an experience that can shake the human intellect to its core.

*We see 8 films in the VR Competition section.

*This the year we present a new international competition section, Meet the Neighbors with 10 films. In the section we find filmmakers from the Southeast Europe, the eastern Mediterranean, and the Middle East, with their first or second films.

*We find the most dynamic films in the Out of Competition and Open Horizons section.

*We present the best Balkan films in the Balkan Survey section.

*We find beloved filmmakers in the Special Screenings.

*We discover interesting films in >>Film Forward and we meet after midnight in our ’Round Midnight section.

26 feature and 17 short Greek films will be screened at the 60th TIFF:
17 films produced in Greece and in co-production with other countries will have their Greek premiere in Thessaloniki (“First Run” section, part of the Greek Film Festival 2019 program).

2 films shot in Greece or with Greek themes (“Beyond Borders”)

The 16 award-winning films of the 2019 International Short Film Festival in Drama will also be screened.

The 60th TIFF presents FESTIVAL, a comic for all the things that compose the past, present, and future of the Thessaloniki Film Festival.

Meet the Future: A new initiative looks at the future of Greek cinema. Filmmakers who have traveled with their short films in the 13th biggest international Festivals will come at the 60th TIFF to present their next projects.

Agora's ambassador: Beloved Greek actor Giorgos Pyrpasopoulos will bring in contact film professionals with the greek film community and will present the Agora awards of the 60th TIFF.